A Manifesto for XinWu Village

As the architectural cleansing continues in China, many more traditional villages are going the way of Kowloon Walled City. For all of its shortcomings it also had virtues and things humanity can learn from. Generally it is quite simple to discern the difference between a city prior to the automobile, its streets; more narrow and winding. In contrast cities built for cars tend to have long straight wide roads. Kowloon walled city is one example of density and intricacy exhibited pre-car, yet actively evolving, maintaining momentum and trajectory in a post-car environment until like many of its mainland village counterparts it was demolished.

This spring at Wenzhou-Kean University’s, Michael Graves Collage, School of Public Architecture, Bo Lin and I taught a second year studio focused on architectural design and urbanism. Our approach to urbanism is not based on scale but instead, proximity, complexity, connection/relationships. This seems particularly important due to the fact that the rural village is not generally of a scale that is traditionally classified as “urban”. Recently the city has receive much of the focus but in order to cultivate a more holistic human habitat it is important to consider the unconsidered places, especially since according to some sources rural settings are still close to housing as many people as cities do. Only recently (around 2008 according to ourworldindata.org) did cities surpass rural as the prime location for the inhabitants of humanity. That means that according to the same metrics there are currently more than 40% of the world’s population living in rural settings. Providing urban within the village setting can provide fertile ground for a vibrant modern life outside the city and arguable a better quality of life too.

One might ask where you find the favela in the village or the rural. Any village built before the automobile will have a much more organic and arguably urban and ad-hoc or bottom up relationship due in part to transportation proximities and less rigid planning. The rural also has flexibility that the city does not. Providing the opportunity for urban rural to be developed and cultivated is a problem worth addressing. This effort has the possibility of embracing and preserving “the favela” in the rural.

We were asked by the municipality leadership of the remote XinWu Village outside of LiShui, Zhejiang, China to update an existing masterplan. The studio began with an exploratory site visit. The class unified and rose to the occasion with the exceptional opportunity to work for a real client within the educational design studio. The approach was research followed by specific case-study proposals with some major pointed infrastructure improvements. The document presented at the end of the semester was a +300 page document that can be considered more than a masterplan, but a manifesto for the village.

There are some very unique and other very common characteristics about XinWu Village; this was part of the allure of the project. The flight from the village, as cities provide ever increasing opportunity, has been acknowledged. Thus, in some ways, the future of China rest in the village. In this way we take XinWu village as a case study for villages at least throughout China. The studio focused on the need for specific localized interventions, much like the shift in manufacturing toward mass customization is unfolding in the 21st century. 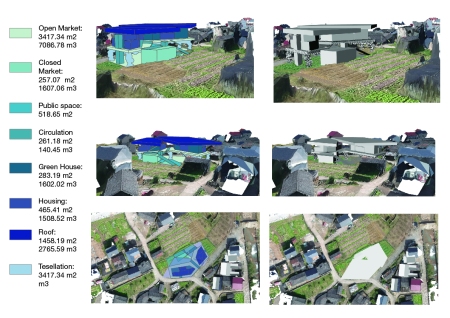 To attract more young people and evolve the local economy, the village plan expresses the intention to save the central site and protect the historic core (there is a relatively large number of existing historic houses in various degrees of dis/repair).

The village had an existing somewhat generic masterplan provided by a design institute operating at a distance and primarily focused, not on the quality of the place, but the logistical, particular efficiency and ease of implementation for their masterplan proposal.

Our manifesto, if you will, instead attempts to focus on the opportunities embedded within the self-directed interest in red-culture tourism, and the challenges currently self-evident within the village, which include a need for additional housing and the need to create a draw to increase population in a sustainable way.

Our strategy, instead of relegating all of the new housing to only the outskirts of the village, is to infuse housing throughout the village as much as possible. Using existing, and underutilized spaces and buildings to densify and reengage the urban core. The ambition is that areas outside of the existing developed envelope can remain more natural and/or agricultural. When the village must expand beyond the current envelope it might be done in a way that is sensitive to access to the surrounding beauty and adding an increased dimension of amenities to the village. Examples of this include recycling and water treatment centers, medical and care facilities (child and elderly), technical and primary education facilities, a library, and more.

This means that while the envelope of the village will increase it can be minimal and specifically targeted to bring additional amenities and then focus on densifying to meet housing needs. In this way we hope to maintain or enhance the existing urban feeling, while providing new services not currently provided by the village, hopefully keeping the favela in the village. In the age of virtual connections, the impulse to gather into large cities might be replaced by the opportunity to stay in the remote, and unique local places. Let us work toward creating compelling solutions that encourage a shift in focus back toward the more rural places.