Once, climbing among the granite crags of Utah’s Little Cottonwood Canyon, I met a Brazilian climber who described climbing in Rio to me as, “almost like Yosemite, but with these beautiful ocean views.” I’d climbed in Yosemite, but to that point I hadn’t been to Rio, so the image he provided for me gave me something else to look forward to. When I finally made it to Rio, there was so much to love about its natural environment: the powdered sugar sand, capuchin monkeys, the orchids springing from stone facades, not to mention the truly mind blowing bird populations. But because I’ve made those trips with no belayer, the steep granite of Dois Irmãos, Pão de Açúcar, Pedra da Gávea, and Corcovado still holds that unrequited allure. 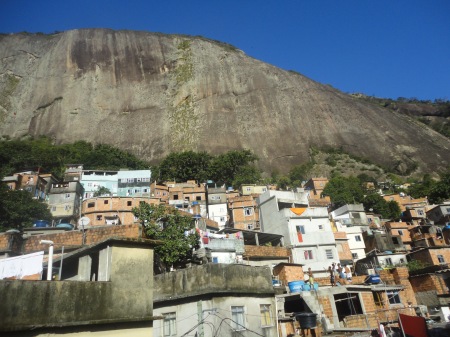 You may have seen it on mugs and on tee-shirts, that famous, ubiquitous almost, quote from John Muir. “The mountains are calling and I must go.” I feel that call almost all of the time. And it’s the first thing that came to mind upon seeing this promotional video for the Centro De Escalada Urbana. The quote is a snippet from a letter John Muir wrote to his sister, Sarah, while he was in California’s Yosemite Valley in the fall of 1873. If inspirational Pinterest and Tumblr posts are any indication, the quote clearly carries a significance that resonates with a lot of people across the many decades from the time Muir wrote it in that letter.

John Muir’s writing, in personal letters and published books, is positively laden with exuberant language describing the bond he felt to the natural world. In 1869 he wrote to his friend J.B. McChesney, “I am warm again, safe nestled in mountain ether, I seem to have returned to life from a strange and half-remembered death.” In a letter to Jeanne Carr, he once recalibrated mid-sentence to avoid minimizing the depth of his feelings. Speaking of the upper Yosemite Valley, he wrote, “I passed, no, I lived another night there two weeks ago, entering as far within the veil amid equal glory.” Perhaps we feel, as he felt, a yearning for a place that makes us feel more peace, more alive, to live more deeply.

American Naturalist John Muir, circa 1907. Click through for image source.

The first mountains that called me were the volcanoes of Oregon’s Cascade Range. Without words, they fed my impulse to move upward, to feel the cold burn of lightweight air, to turn around and look over the places I belong. That call of the mountains is real. However, the longing we feel is not unique to high altitude. That sense of being animated, brought to life by a special piece of land, of belonging to a place, may be among the most profoundly definitive of all human experiences. For me, streams running fast through heavy timber are fixtures of such a place. The years are useless to damper my connection to those places. Because the recollection is not merely in my mind but my body as well. Somehow the memories are muscular, sensory.

At the summer camp I attended as a boy for kids with Native heritage, they told us how all things have a spirit, and that spirit connects us to everything else with a spirit–to everything in the world. I knew immediately what that meant. I had felt that connection many times, nameless but fierce and patient.

Some of those places sacred to me are now defunct, altered irrevocably: subdivided and subdued. The Old Testament words of Isaiah come to mind, “Woe unto them that join house to house, that lay field to field, till there be no place, that they may be placed alone in the midst of the earth!”

I have felt that woe, in many places, and I felt it in Rocinha as well. For as wonderful as I find the built environment of places like Rocinha: the winding becos and panoramic laje vistas–there’s a tension to the blanket of concrete as it rolls out over things that live. The unintended consequences of urbanization are not unique to favelas. Urban expansion is bearing negative effects for people and myriad other species all over the globe. I believe it affects us all, sometimes we notice the effects, but often being cut off from the natural world affects us in profound ways even when we aren’t able to recognize it.

Aerial view showing the sparseness of greenery in Rocinha.

The green areas in aerial view are experienced like this at ground level.

I once listened to Dr David Strayer, a neuroscientist, report on his research to a gathering of teachers at an Environmental Education Conference. He began his presentation by saying that he wanted to prove what nature writers had been saying since Thoreau: that nature is good for people. His research, reported here in the New York Times, here in National Geographic, and here in the local Deseret News, did not come up short in reinforcing that claim. Strayer administered  a test of cognitive abilities (the ability to think quickly, clearly, and creatively) to groups of test subjects. He would then take the group on a  four day wilderness experience, stipulating no electronic devices. And then, after the four days, administer the same cognitive exam.

The first test group showed a staggering 30% average increase in cognitive ability. He told the conference that the results became more robust the more the test was administered until, up to the date of his address, the average increase in cognitive ability after a four day wilderness experience was 50%! We augment our brains capacity by half again, simply by maintaining a healthy interaction with the natural world. When we are unable to maintain that interaction, our brain is debilitated and we suffer–whether or not we notice the difference.

Dr Strayer explained that our brains are simply not evolved to manage the stressors of modern life–what he called hard fascinations, or inputs into our brains that put us into alert mode, for example an alarm, a phone alert, an angry voice, a car horn, and the multisensory experiences that accompany those sounds. Most of our urban environment is comprised of these hard fascinations–throw in armed conflict, as occurs in Rio’s favelas, and one can imagine the compounding effects. Our brains, according to Dr Strayer, are evolved to manage primarily soft fascinations: birds singing, a warming flame, wind through trees, or surf at the beach.

Managing our sensory inputs to include a larger balance of soft fascinations through natural surroundings allows our brains to heal and return to the state that they are evolutionarily prepared for. By placing ourselves in natural environments we allow that cognitive healing. In short, nature is good for us.

Some time back, I was able to visit Rocinha’s Ecological Park while it was still unopened to the public. At the time, I reflected on my previous observations that even as urban locations go, places like Rocinha inflict what Richard Louv famously called, “nature deficit disorder.” People become isolated from their place in the Earth (“Woe unto them” is right). The built world can be so mediating as to block out any influence of the pre-existing world. What at Natives Camp they identified as the spiritual character of everything, in architecture we call the genius loci–the spirit of the place. Often we judge architecture on how well it communicates with and fosters the genius loci. Architecture should connect us to our place. It should connect our spirit to the spirit of the place. But so often it overlays and displaces the world in such a way as to leave us bereft of connection.

In 1873, John Muir wrote, “The life of a mountaineer is favorable to the development of soul-life as well as limb-life, each receiving abundance of exercise and abundance of food.”

Climbing Dois Irmãos with C.E.U. Click through for C.E.U.’s webpage.

He may as well have been speaking directly about Rocinha’s Centro de Escalada Urbana–feeding the limb-life and the soul-life of Rocinha’s young people is exactly the founding idea behind C.E.U. Their promotional video states that C.E.U. “aims to use rock climbing to promote self-confidence, personal responsibility, environmental awareness, and healthy living, to the youth involved in its programs.” They could not have picked a more appropriate activity than climbing to work toward those objectives.

Many times climbing I’ve felt the sensation of tapping into the soul of that place. There is something about bare rock that provides the feeling of permanence and rootedness. And the meditative athletic zone facilitates one’s ability focus on the relationship between my own physical self and the eons-old geology–and through the that specific geology, I connect to the Earth as a whole. It becomes easy to imagine, somehow at once, that we’re made of the same stuff me and the Earth, but that my time is but a moment compared to the immensity of geologic time.

Experiences like that invoke what philosophers have called “the sublime” the simultaneous terror and wonderment that intensifies the moment and enriches our life. The Earth and our connection to it are the crucial ingredients in those sublime moments. I’ve heard practically countless climbers give voice to similar feelings of nearly indescribable combination of fear and elation, of the transcendence of climbing’s exertion and meditation.

Mateus, a C.E.U. participant offered one such voice. When asked, he described climbing’s benefits as, “something different than what most people in the community do. People really stay in their routine, always doing the same things. Climbing never lets you stay in your comfort zone. It challenges you to take the next step, to take it to the next level, try something new.”

Climbing is inspiring. It can prompt the climber to connect in deep and meaningful ways. In fact, the quote above from John Muir, the one from all the social media posts is an incomplete thought. The way it appears in pop culture leaves it conveying a simple, free-wheeling wanderlust. However, the full sentence from his letter bears much broader significance: “The mountains are calling and I must go, and I will work on while I can, studying incessantly.” John Muir expressed a feeling held by many a mountaineer: being inspired to know about the places he climbed, to connect to them, and ultimately to work toward protecting and preserving them.

Still from the video “Black Diamond Presents: The Brazil Project.” Click through for video.

Certainly, climbing will do what C.E.U. hopes it will: to remove kids from the routine of their lives, to expose them to adventure and risk, to excitement and challenge and offer them the confidence that comes from confronting challenges. Inevitably, in answering the mountains’ call their lives will be richer, and their relationship to Rio ecology more profound.

I read recently that doctors are beginning to offer prescriptions for the medicine of nature. Having worked with many kids deprived of risk, adventure, and of natural connections by their built surroundings, and seeing first hand the effects that this deprivation causes–I know exactly what I would prescribe if I were a doctor. And C.E.U. medicine is it.

In the coming months I hope to hear from C.E.U.’s officers, staff, volunteers, and participants. I’d love to hear more of their perspective and pass along their first hand accounts. What they’re providing for Rocinha’s kids is a model for urban and suburban communities all over this kind and lovely planet of ours.

Error: Twitter did not respond. Please wait a few minutes and refresh this page.