A narrative short film about a young teenage girl from northern Argentina adapting to life in a large informal settlement in Buenos Aires.

A note from the director, Reed Purvis:  The film focuses on the informal settlements and class struggles but also subtly deals with the forces pushing people to migrate from rural areas to the city. As most people are aware, deforestation caused by large scale industrial farming is a critical issue threatening the worlds ecosystems. However, it also edges out medium and small scale farmers, many of whom must migrate to the cities for jobs and find themselves living in informal settlements.

The film focuses on the abrupt change of adjusting to life in an informal urban settlement and is inspired by real characters and stories during my time living in the same informal settlement where the film will be shot. We will use non-professional actors from the neighborhood in a collaborative style with hand-held cinematography. 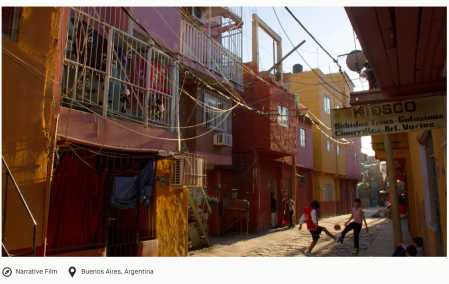 Story: From a rural area in Santiago del Estero, the province with the highest poverty index in the country and the highest rate of deforestation, fourteen-year old Marisel relocates to Villa 31, a large informal settlement in the center of Buenos Aires. The film focuses on her first days, as she must adapt quickly to living in a one room apartment with her cousin’s family in a very dense neighborhood with precarious services. However, life in the “villa” is actually almost luxurious for her, as her family’s home doesn’t even have electricity or good access to education or health care. Despite the hardships, she discovers a vibrant and cohesive community and the ability to improve her circumstances.

For more info check out the kickstarter page – http://kck.st/2IS9kFN

Check out a couple of other contributions by Reed Purvis HERE