I’m not particularly prone to sentimentality—in terms of emotional depth, I think it’s safe to say that I’m at the back end of the bell curve. But this is too much.

Some times because of a smell or a flavor or a sound, or a humid evening, and sometimes completely out of the blue, I get that kind of saudade que arrebenta, that kind of longing for which no word does proper justice, but that kinda crushes your lungs. It’s saudade do Brasil and it’s really always there, just sometimes worse than others.

Right now it’s worse than ever: Writing about Marielle –the Marielle that I never met, but that in some ways seems as though now, in her absence, she’ll always be here.

“Eu sou porque nos somos. Marielle’s slogan “I am because we are.” Click through for video.

Marielle was the third black woman of favela upbringing to be elected to Rio’s Camara Municipal. The first was Benedita da Silva in 1982, the second was Jurema Batista elected in 1992 after more than a decade of fighting the good fight to represent the underrepresented. Elected at gaping ten year intervals.

Among her final words, delivered at a panel discussion called Jovens Negras Movendo Estruturas (Young Black Women Changing [Power] Structures) she said, “Before I came to the Camara, it was ten years since a Jurema [Batista was elected]. And ten years before Jurema, it was Benedita [da Silva]. We can’t wait another ten years, or hope that I’m here for ten years.”

The only certain details of the early investigation was that the bullets that ended her life had been property of the Policia Militar. Of course, the explanation is that the bullets were misplaced from police custody.

But whether the killers were current or former police officers or someone else outside the police force seems beside the point. Is negligence and incompetence at that scale better than direct involvement? Besides since militias began as Esquadrão da Morte (“Death Squad”) in the days of the Dictatorship, there has been a perverse reciprocal relationship between the militias and the police. And for favela residents, the police and and militias are only separate from drug trafickers only in name. The practicality of death and violence so often is no different.

Of the two men so far arrested in connection with Marielle’s assassination, one is former Military Police, and one is a former firefighter both with confirmed ties to a militia, both under strong suspicion of acting on orders of those with official power–which fact has so many in Rio and around the world on high alert. How can the investigation be untainted if some involved may be involved in related criminal activities themselves?

Just days after her assassination, Caetano Veloso’s song “Estou Triste” appeared on the website antiwarsongs.org that catalogues protest music. I’m not sure it was intended originally as a protest song. It’s from his 2012 album, Abraçaço, but, recorded from home, and posted to instagram, it became a new song with new meaning. Often I’ve wondered why Caetano appears to age more slowly than the rest of us. But he looked so tired singing. Bent with down turned eyes and fallen expression. He feels what we feel.

His lyrics sang my song: “my chest feels so empty, yet so full.”

But those are maybe vain wishes coming from the heart that’s so empty. What I need, what we all need, is to live on, to honor her memory by spreading friendship, by using the time left to us to lift up the downtrodden, to hold accountable those who abuse power, to share love and to unite. She is photographed wearing a tee-shirt emblazoned with the slogan “DIVERSAS E NÃO DISPERSAS” (Diverse but not dispersed). To honor that sentiment honors her work and her life. 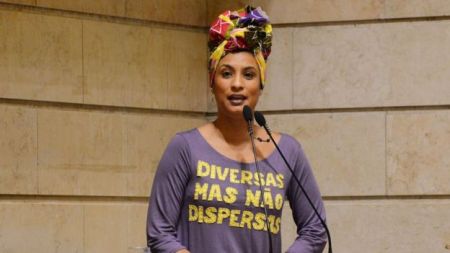 I am not certain if her killers will be brought to justice, given the history of Rio, or Brasil, of Latin America, it seems as unlikely as it is morally important. I am not certain who will take her place in political activism in Rio. What I am certain of, though is that we all must honor her life and memory in any and every way available to us. I am certain that the best way to honor her memory is to live up to her legacy of hopeful engagement, of fighting the good fight with kindness and tenacity.