In Washington DC, that second city is presented through its alleys. Interwoven into its Haussmannian grid lies a series of forgotten spaces… a ‘forgotten city’ reflecting history of migrants, poverty and survival; particularly black survival. Not privileged to the street life, it brings life to itself; it is a city of adaptation, of collective efforts and community.

These spaces, though many currently deteriorated and neglected, are spaces that are “in sight but out of mind.” They hold tremendous potentials for the city and its residents aiming for a more local and collective development, providing alternatives for more inclusion, equity and resilience in terms of housing, public spaces, infrastructure and collective amenities.

Now, before diving into some of the potentials alleys bring to the city, we must understand some of the dynamics prevailing in Washington DC.

Washington is a city where Federal and Municipal forces collide, territorializing and controlling in different ways. In fact, Washington at a municipal level controls an approximately 50% of the city’s territory, the rest of the land remaining out of reach to the city as it is federal land and natural reserves. To say the least, things can get quite convoluted in terms of development when territories overlap or juxtapose themselves…

I can venture to say that, beyond those who live and work in DC, not many know or understand these two governing forces in the city. As the Nation’s capital, Washington DC has continuously reaped the benefits of a strong tourism industry. Yet, the city portrayed to the tourists is primarily the Washington side; the city of grand government, monuments, and vast public spaces- the Federal City. The DC side, where much of the day-to-day life of citizens takes place, was (and remains) quite unfamiliar and even ignored to the general visitor. In fact, in many cases and for many decades (stemming from the civil protests in the 60s), this DC remained quite untouched, neglected, and even unfamiliar to some of the city’s residents who limited themselves to the downtown and a small number of neighborhoods in the North West quadrant of the city.

It is only in recent years, linked to the influx of new population, new demands, new developments, that the Municipal DC has undergone rapid transformations and a revitalization of the city, which was once quite stagnant and deteriorating. We are now witnessing a gentrifying city (for better or worse) transforming entire neighborhoods.

In search of inclusion and equity: It is not a secret that Washington remains a city with many disparities. With all the changes the city has undergone in this last decade, the discourse and policy are slowly catching up to current needs and much needed changes in urban development. We now have a city that is getting oversupplied with luxury housing, yet continues in a hungry search to keep neighborhoods affordable, especially for long-term residents.

It is also a city where the housing gap is not limited to low-income housing, but includes moderate income and working families as well. As city pricing continues to rise and the majority of the assistance for more financially accessible housing is allocated to traditional affordable housing strategies (affordable housing tax credits) or a housing trust fund that the city primarily aims at families earning less than 30% AMI (average median income). Families between 60-120% AMI are not getting support from a policy, and incentive perspective, thus leaving a big gap for working families in the city (even if the discourse and vision for the city is pushing for it). This situation has lead to the term “missing middle.”

Wanting mix use + walkability: Even with the strong transformations taking place, bringing in new families, demands, and values, Washington remains a pretty zonified city; it’s neighborhoods limited to a mono-use designation and development. What I mean with this is that a residential neighborhood remains almost completely residential, with very little mix-use opportunities in terms of markets, cafes, restaurants, office spaces, live/work options, etc. Though the infrastructure in the city has been evolving, including more public transportation, bike lanes, pedestrian access, needed services and urban amenities mainly remain limited to particular finger corridors. A quick look at the DC’s history shows us that, unlike its sister cities- such as New York Boston, Chicago- where ethnic neighborhoods took predominance in the development of the city, and needed to function as small cities themselves with all services and amenities at the neighborhoods level, Washington presented a separate case.

Today, with the increase in population, densification, and new values, as well as the urgency to create more sustainable and resilient development, there is a push for more walkability, for grocery stores and bodegas to be more accessible, and to have more mix-use and diversity in the city’s neighborhoods.

What makes city fabrics rich and the reason why many European cities are so agreeable and inspiring, is the richness and depth of their urban fabric, allowing a variety of building scales and enabling semi-public and semi-private spaces that ultimately lead to a stronger appropriation by the surrounding neighbors.

Washington DC is a monumental city and at the same time remains quite void of collective community spaces that work at a neighborhood level. Aside from a few exceptions, most public squares belong to the Federal government and consist of the Mall or large open green squares and plazas (i.e. Dupont Circle being a prime example). Even with some existing neighborhood parks, the city and its neighborhoods could benefit from more collective, semi-private and semi-public productive play spaces.

Many of the alleyways, though interwoven all over the city,  remain undervalued, underused and stigmatized. Their history and past reputation for drug dealing, gangs and prostitutes have eclipsed the tremendous potential they have to become desired spaces to live, work and play in the District.

As shown in a previous post, an exception in the city regarding its relationship to alleys is Georgetown. Since the beginning of the 20th century, alleys and alley dwellings were absorbed into the city life, quickly gentrifying, converting the alleys into streets, and given them more connectivity to the adjacent surroundings. 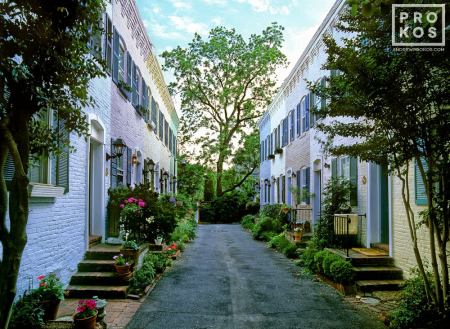 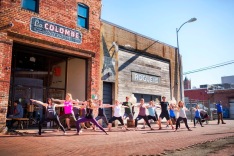 Another example is Cady’s alley in Georgetown, now a center for design stores and upscale restaurants and cafes.

Alleys are used by some artists as finding other accessible spaces in the city was difficult, and in a wonderful exception are the home of a wonderful community park. 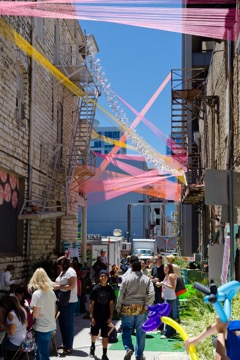 On Capitol Hill, alley have been a bit more incorporated in the residents lives, a few having even community gardens.

Alley buildings can be transformed into commercial, office, mix-use or residential spaces bringing life, mixicity and more equity and inclusion into existing neighborhoods.

Other cities such as London, Seattle, Vancouver and San Francisco have created wonderful opportunities from allay structures and spaces. Stay tuned for Part II// Looking ahead: alleys as the new alternative.