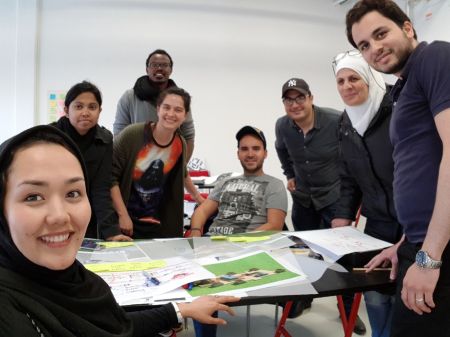 In the blog entry – You look at what is happening in Malmö, Sweden yes who would have believed this! (1) – I promised you an update on our projects and activities and would like to take this opportunity to write about the successes of PLANAS (pictured above) who are just about to complete their first project for The Opportunity Space Festival.

What is excited it that we managed to turn things on its head. Steadily PLANAS grew from being considered `the target group` of the Festival (i.e. in need of being integrated into Swedish society, which in Sweden means having a “real” job)  to an official program partner of the Festival i.e. contributing to the goals of the Festival by organising their own program. So instead of being the participants in the programmes organised by the established organisations who work daily with design, sustainability, integration, etc. PLANAS organised a programme by the job seeker for the job seeker.

Let me tell the story; 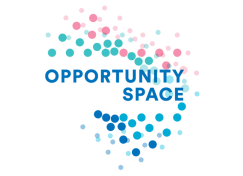 “The New York Institute Van Alen Institute is known around the world for its work on urban development issues and when Malmö was a global focal during the major refugee stream in the autumn of 2015, Van Alen contacted Malmö Stad (the municipality) with an idea of how design and architecture can facilitate economic and social integration.”  ( translated from the local newspaper Sydsvenskan, 4 maj 2017)

The Opportunity Space Festival is twelve days of free performances, hands-on workshops, and discussions that bring people together from different backgrounds to meet each other, learn new skills, exchange ideas, or prepare to enter the job market. (Official website of the Festival)

What? “Fika (Swedish style coffee break) without Borders” with newly arrived job-seeking build environment professionals – mostly architects – (AKA PLANAS) on furniture designed and built by them

PLANAS – Platform for Network Acceleration – is a self-organised group. Its current eight members are all trained built environment professionals (mostly architects) looking for work, they all (relatively) recently arrived in Sweden from Syria, Afghanistan/Iran, Uganda, Egypt, Bangladesh and Brazil. You can find their profiles below.

They believe that by engaging in real projects they support their own individualized and empowering path towards employment. It is therefore that they have organized and activated themselves.

How PLANAS came about you can be read HERE, they also have a facebook page you can follow. 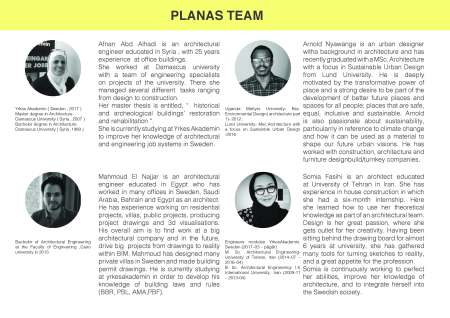 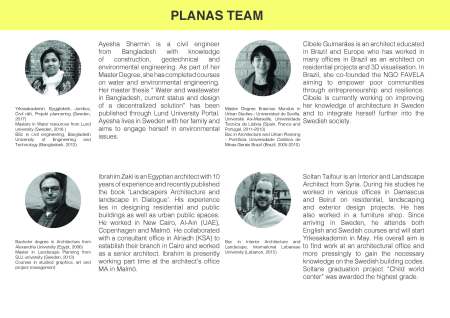 At this moment the PLANAS members are in the construction phase of their first project called Design Transformations.

As mentioned, the Opportunity Space Festival commissioned PLANAS to support the overall goals of the festival, primarily: making it easier for people from many different backgrounds to meet, build skills, and prepare to enter the job market. (adapted from their brief)

PLANAS took up the challenge and decided to design and built a temporary intervention in the park where the Festival is to be held.

Three established architects and one construction engineer from the largest Swedish architecture firm WHITE offer the PLANAS mentorship to support their professional development. 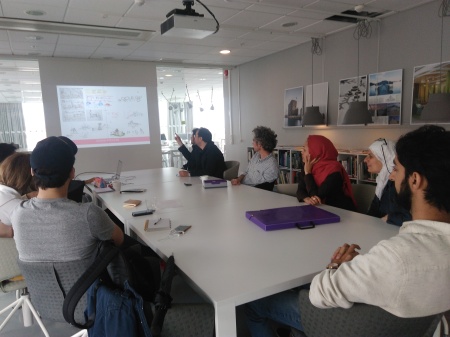 One of the regular design feedback sessions at the WHITE office.

To decide what would be built in the park, PLANAS took a participatory process involving many different stakeholders such as the users of the park, local residents, the festival organisers, local organisations and companies as well as the municipality. 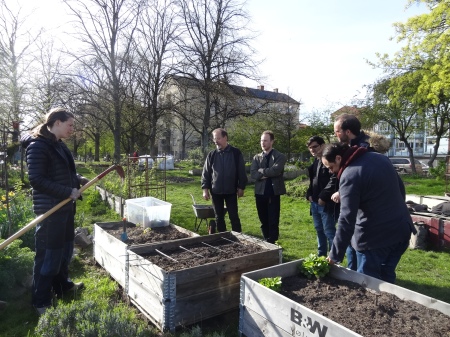 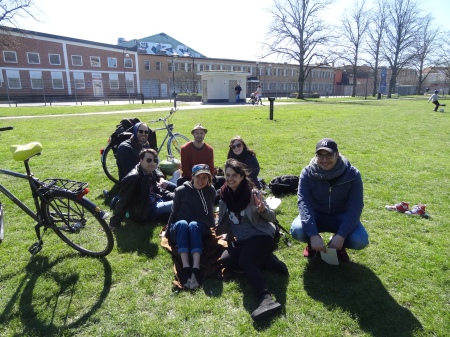 PLANAS conducted site analysis through interviewing key stakeholders about how they use the park, and small-scale improvements they would like to see. They also made observations about park use and characteristics 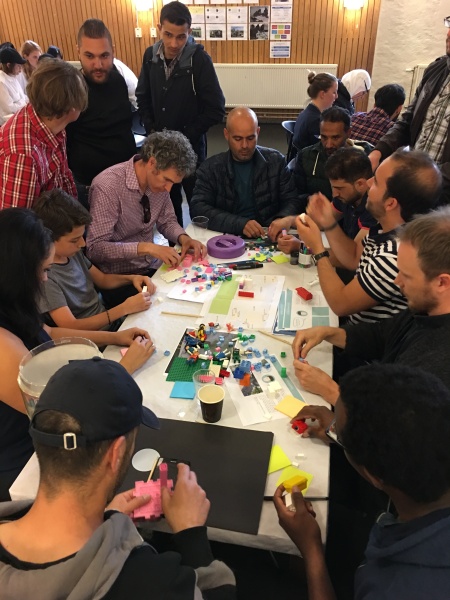 PLANAS conducted their first event: a participatory design workshop.Many people turned up! As Cibele, one of the founding PLANAS members concluded, that it was great that people took the time to participate in a workshop that was hosted by a little-known actor (i.e. PLANAS) in a very small project on a weekday! 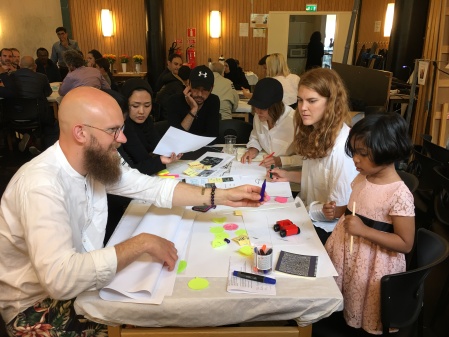 Participants included Studiefrämjandet, Malmö Stad (the municipality), Odlingsnätverket Seved as well as individuals – including children – from the neighbourhood! When a whole class of Swedish For Immigrants (SFI) spontaneously decided to participate, PLANAS had to take on the role of translator too! Here they really demonstrated their abilities. It is not an easy to host a participatory design workshop with so many different kinds of people with different languages and backgrounds taking part.

After the workshop, the civil servants from Stadsbyggnadskontoret / Malmö Stad (the municipal planning office) enquired about the availability of PLANAS. We couldn’t believe it, two PLANAS members were offered a small, but real, assignment!

The municipal planning office was looking for professionals who can give a different perspective.  What Malmö Stad was attracted to was not only PLANAS’ professional background but also their ability to bridge between people from different backgrounds, their enthusiasm, their language skills and their network among immigrant communities! 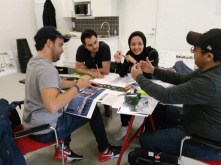 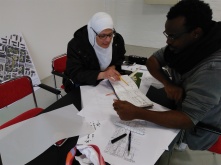 The eight professionals worked together for many hours to come up with the design – not easy with eight professionals from very different backgrounds and just one small project! Malmö Stad Stadsbyggnadskontor (the municipal planning office) was generous enough to lend them a space to work. 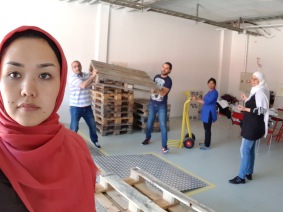 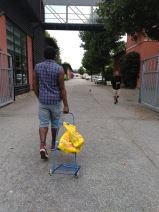 ALL WELCOME TO FIKA WITHOUT BORDERS!

The café will be ready in just over a week! PLANAS will run the café during Opportunity Space Festival with coffee donated by Aldokkan.se .

It is a chance for people to meet informally over fika (a Swedish coffee break) sitting on the furniture that PLANAS designed and built. PLANAS would love to meet you there and particularly interested in talking about your experiences of being in public spaces!

Hope to see you there!

* MESHWORK is a little company Akbarnazim Modan and I set up upon arriving in Sweden. We are both trained architects and enjoy participatory and people driven processes and dynamic as well as complex built environments; think post-disaster contexts or cities that are rapidly changing due to migration or large projects. One thing we do at MESHWORK is to support PLANAS. Through this blog, we would like to support PLANAS with publicity, please spread widely!

AND NOW SOME REAL RESULTS:

PLANAS are part of the opening ceremony with a speech! 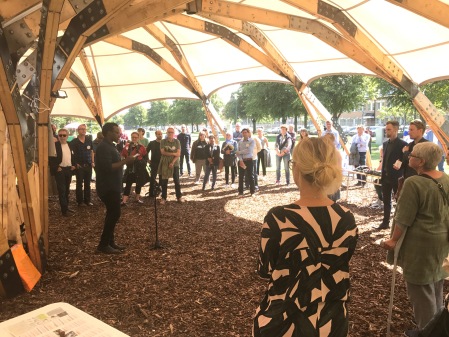 PLANAS were live on Swedish Radio!

as well as written about here in Sydsvenskan – the local newspaper: 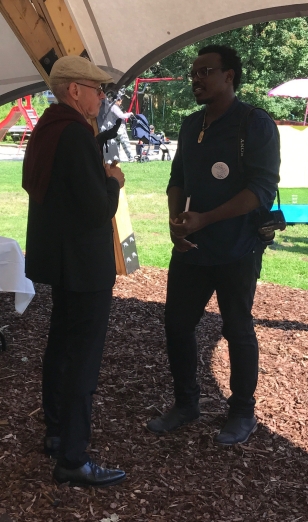 PLANAS get an invitation from the

Director of the Municipal Planning Office

to get in touch!

PLANAS makes many new connections over offering ‘Fika’ in the café that they designed, built and run! 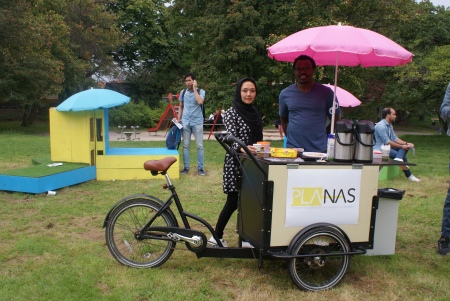 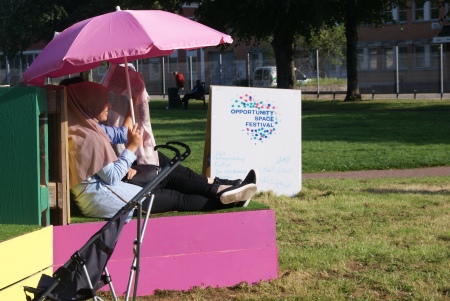 AND ALSO MUCH RELIEF AND HAPPINESS AMONG THE PLANAS MEMBERS! 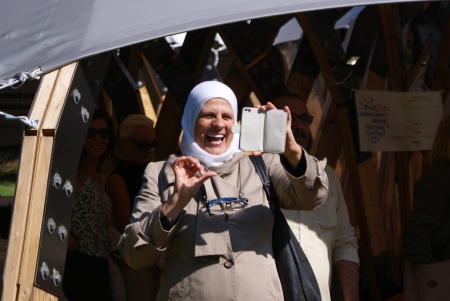 One thought on “PLANAS _ from target group to official program partners!”