It has become frequent to hear talk about limits or borders as barriers that divide, ban or protect against threats.

Many are in favor of barriers or fences as ways to cutting off those who are different, the “otherness”, presuming they address the need to keep out change, which is a speeding reality. Change will happen despite walls or fences. What we should stress on, is the focus on results.

Increasing numbers are either denying environment realities or betting on sudden magical solutions, believing instant and oversimplified relief offers. Not realizing these barriers have proven long term social failures because they will only keep increasing, tension issues: fear, envy, misunderstandings and frustrations from both sides.
When part of society begins to think of “Shutting Off/excluding “ other part of social spectrum, we are just giving up on a real solution; we are no longer trying to relate to, or considering alternatives , or even trying to understand the ‘Otherness’. Being collectively fed-up is very dangerous, it can bring about short cuts that will snap back at us.

The Eastern Bloc claimed that the Wall (1961-1989)was erected to protect its population from fascist elements conspiring to prevent the “will of the people” in building a socialist state in East Germany. In practice, the Wall served to prevent the massive emigration and defection that had marked East Germany and the communist Eastern Bloc during the post-World War II period. (Wikipedia)

Most planners have a clear view that each building must properly connect to its global site. Coordinating key metropolitan elements within a city or group or cities, is of utmost importance for next era of megalopolis. Most of the borders that join or enliven urban sectors should attract multiple identities and nationalities to exchange and interact. Connecting systems within the city can create positive conditions: historical sites, cultural & arts, sports or gourmet trails. Or terrible ones: border check points, drug lords control fights, neighbor wars, proliferation of walls isolating the individual properties, etc.
We have historical examples of dividing WALLS and their profound social damage leads sooner or later to costly processes of disintegration.
Trump’s public promise of a Mexico border Wall +2000 miles long has not yet a project or a budget but a Dutch Architect has volunteered a design with solar panels to finance its construction.

Stitching strategies that join or attract to common space different neighboring communities, will teach us how to win stakeholders over to the goal of cities working as melting pot of races and creeds. Study of public spaces as systems will bring us nearer to solving social exclusion, than imposition of sets of bylaws for city infrastructure from urban authorities. The aspects of proper, design and legal forms, representation, funding, maintaining, activating, volunteer support have to be promoted by urban organizations expanding the positive city experience to urbanites. This does not mean a uniform city tissue but satisfying particular situations for different public by listening to neighbors and fostering real participation. (the one that can let individuals make a difference within their communities.

The Big Dig in Boston was a 2 stage mega-intervention in which the city was divided by I-93 ,highway in the 50’s and later, between 1991- 2006, it was rerouted along a 3.5 mile tunnel trying to stitch the downtown area which had been severed from the waterfront the city. The operation was financed by recovering value of the affected land. 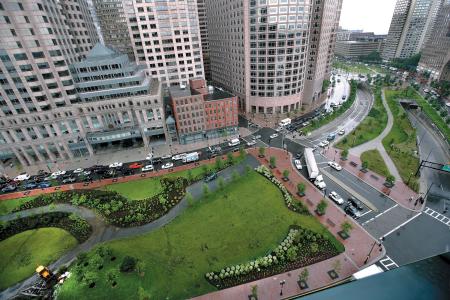 Dismantling the Central Artery and replacing it with the Rose Fitzgerald Kennedy Greenway has opened up views, connected neighborhoods, and created a vast public space.

Another ‘border experience’ is Houston’s Buffalo Bayou. It did not get rid of elevated highways as Boston, but reinforced a water line border crisscrossed by speedways in different levels. Almost 35 years of community work transformed the Buffalo Bayou, from a dividing element, to a central space of Houston which happens to join iconic landmarks and provides a common place for all ages, classes, and groups. The activities developing along the 160 acre extension include all ages and interests range from volunteers to gardening clubs; show case experiences in water purification, running and bicycle trails, kayacs, boot camps, beach volleyball and skate park. Wild life and pet playgrounds, bats, ducks, lizards along with art and history features, are represented strengthening the city’s identity along this 6 mile border: outdoor activities that bring people together, and new perspective views of the city.

A Partnership of citizens and Flood protection Agency produced a Master plan with the best available professional knowledge , It has been 30 years to achieve present Buffalo Bayou and it is still expanding.

True. Borders can be exciting or terrifying! N’est ce pas?