The public spaces play a prominent role in the long-term resilience of slums as they allow for continued interaction among the residents. There are two distinct public spaces in the PJ slum, the beach and the streets, both of which are crucial to the social fabric of the community.

Here is an interview excerpt to illustrate the role of public space in the daily life of the residents.

AP: We wake up around 4:00 am and after completing our morning routine we go sit on the beach and observe the daily activity.

AP: All my peers (jattu vallu) sit on the beach and gossip about our sons catch and what they bought home etc.

As seen in the above conversation between a 70-year-old retired fishermen and the author, the senior fishermen prefer to spend time in the public beach with their peers, since the majority of the housing in the PJ slum is compact and can some times be over-crowded. Compared to the houses, the streets and beach are pleasant due to the sea breeze; the residents of the slum therefore tend to spend more time outdoors. In the next two sections, the streets and the beach of the PJ slum will be explored for their role in the transformative resilience of the PJ slum.

Streets as an Extension of Home

The first two images in Figure 1 show the preparations for large festival; the PJ slum is a very close-knit community where the large life events in the family such as marriage and death are celebrated or mourned with a family feast. None of the houses in the community have the space to cook or seat large groups of people. On those occasions, the streets become the living/dining room for that evening and night. Traffic is diverted to use other streets and the residents cook right on the streets. After cooking, the streets are thoroughly cleaned and the guests sit on the streets together to enjoy the feast. Such communal activities strengthen the bonding within the community.

The two images in the second row of Figure 1, show the women prepping for their dinners on the street; meal preparation which is typically considered a household chore has become a social activity. The last two images in the above figure show other activities such as informal market place and kids playing on the street. These images illustrate that streets in the PJ slum serve multiple purposes. A walk on these streets feels as if transportation is an ancillary activity and a secondary purpose of the streets. It seems that the purpose of the PJ slum streets is to serve as a living room for the PJ slum residents.

The PJ slum’s beach is a working fishing beach. It is something of a truism to say that the lives of the PJ slum residents are oriented around the sea. The fishermen spend their days casting craft into the rough waters of the sub-continent’s coastal belt. Once the fishermen return to the shore with the catch, the fisherwoman take over, they collect the catch, take it to the fishing harbor a few miles out of the community and auction the catch to fish vendors. The PJ slum shoreline is crowded with fishermen boats, boat engines, open sheds to rest and other fishing activities.

Even though the PJ slum residents have branched out into other occupations carpentry, engineering, construction, driving, social work etc most of the slum dwellers continue in the trade of their ancestors. The lives of the fishermen therefore are oriented around the sea both socially and economically. The beach like the streets in the PJ slum is multi-dimensional, the beach provides livelihood to nearly 70% of the PJ slum residents (Immanuell & Rao, 2012). The beach is a social gathering place for the fishermen; the beach has several large sheds where the fishermen rest or where the public meetings are held; the beach provides the open place for the fishermen to store and repair their gear (boats, nets). 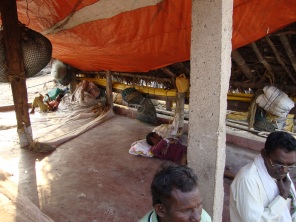 Strong public spaces are critical for vibrant and resilient neighborhoods as they build  robust civic social networks within the community. Public spaces in PJ slum offer a variety of functions, they are multi-layered and multi-dimensional entities as opposed to clearly defined zones or land uses more common in western countries.

Resilience, especially multi-generational resilience in slums is a manifestation of the slum’s desirability among the residents; and the spatial characteristics such as the vibrant public spaces make the PJ slum more desirable to the multiple generations in the community.