With this post, we are introducing one of our new writers to FAVELissues- welcome Deepika! Without further ado…

When I got the opportunity to talk about my Doctoral research on a TED platform, I was overjoyed and ecstatic. But I soon realized the enormity of task at hand. Convert years of academic research into an engaging and entertaining talk for live audience –easier said than done.

My research is titled, Resilient Slums, it is a story of Pedda Jalaripeta (PJ), a slum in the City of Visakhapatnam, which retained its socio-cultural identity over the past four decades despite facing multiple threats. I had to untangle the multi-faceted story of the community from all the academic jargon and narrate it in less than 10 minutes.

Interest in slums within the urban planning community has increased recently (Porter, 2011; Dovey, 2012). It is a welcome move considering, over a billion people live in these settlements worldwide (UN-Habitat 2010). However, most of the existing urban policy frameworks often consider them a sign of planning failure due to their physical imperfections. The objective of my research is to contradict such perception by exploring and celebrating slums as resilient urban systems. The case of Pedda Jalaripeta shows that slums can be resilient, Temporally, Spatially and Socially.

The story of Pedda Jalaripeta is close to my heart as it comes from my hometown, the City of Visakhapatnam. Over the years I saw how Visakhapatnam changed from a small town to a large city with over 1.7 million residents. Visakhapatnam’s beachfront attracted the majority of this development and is filled with five star hotels, restaurants, parks, and tourist destinations.

In the midst of this booming real estate, lies the Pedda Jalaripeta Slum, where over 7000 people earning less than $1.25 a day, live in roughly 32 acres (140,000 people/Sq Mile). Despite the booming real estate market around, the PJ slum retained its character as a low income fishing village for over four decades.

The PJ slum survived multiple disasters over the past three decades. On a cold December night in 1983 an accidental fire destroyed 600 of the 800 huts in the PJ slum. The Greater Visakhapatnam Municipal Corporation (GVMC) redeveloped the PJ slum in 1984 under the on-going Slum Improvement Program (SIP), funded by UK’s Department for International Development (DFID) (Abelson, 1996).  Slum redevelopments are often controversial since they can be poorly built (Perlman, 1976; Patel, 2013), or in case they regenerate, they run the risk of being gentrified by middle-or high-income residents (Peattie, 1982).

The PJ is a slum redevelopment success story since it continues to provide quality affordable housing three decades after its inception. A local fisherman, who was the elected representative (MLA) of the PJ community, was the reason for PJ’s successful redevelopment. According to interviews with slum residents and government officials, the fisherman MLA used his political clout and appointed the slum’s Grama-Sabha as the neighbourhood committee in charge of monitoring the redevelopment and allocating the lots.

After the redevelopment, the PJ slum faced other challenges like cyclones and the 2004 Indian Ocean tsunami. The community faced its most formidable challenge in early 2000. In early 2000 the Andhra Pradesh state government launched several programs to convert Visakhapatnam’s seacoast into a tourist destination. As part of the process, Visakhapatnam Urban Development Authority (VUDA) acquired tracks of land in the City of Visakhapatnam and created Special Economic Zones to build tourism infrastructure.

In early 2000, VUDA signed a Memorandum of Understanding (MoU) with the chairman of Vizag Beach Resorts Ltd., a private company. The MOU supports development on the Visakhapatnam beach for tourist destinations such as beach resorts, discotheques (pubs), star hotels, multiplex complexes, nature care parks etc worth up to 20 billion rupees (**2). This MOU further solidified the threat against the PJ slum and its identity as a fishing village. The tourism plan if implemented would displace 45,000 fisher folk families including the families in the PJ slum. The first phase of the MoU project was widening the road from Visakhapatnam to Bhimli (Equations, 2008; Philipose, 2013). In 2003, the Fishermen Youth Welfare Association (FYWA) along with the District Fishermen Youth Welfare Association filed a writ petition, against the Visakhapatnam Urban Development Authority (VUDA), in the Andhra Pradesh High Court, arguing that the road widening violated the Coastal Regulation Zone notification. The court case halted the project for three years.  VUDA was forced to make some modifications to its original plan (Philipose, 2013). Eventually, the MoU with the Vizag Beach Resorts Ltd. was canceled (Equations, 2008).

It was a CRZ violation. Firstly, the road would fall under CRZ 1, where construction is not allowed. Second a lot of fishermen used that area for drying fish and it is a source of income for us. Third there is no need for a four-lane road way from Visakhapatnam to Bhimli, there isn’t enough traffic to warrant the demolition of a hill. (Personal Interview with BG, 5/10/14)

BG is the treasurer of FYWA and as seen in the excerpt, the fishermen had strong case to oppose the road widening. Therefore, through filing a legal petition against the road expansion, FYWA demonstrated that the community was willing and able to fight developments that encroached on their community. Between 2000 and 2014, the FYWA filed 13 court cases against the government and private agencies for violating the CRZ guidelines. 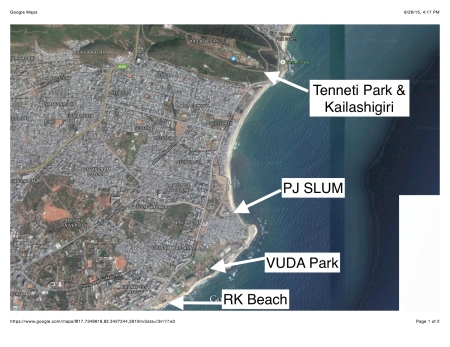 Temporal Resilience– The PJ community is therefore resilient temporally since it survived both natural (fire) and man-made (gentrification) disasters.

Spatial Resilience: Why did the community fight?

An important feature of Pedda Jalaripeta is its beach. The section of Visakhapatnam beach along the PJ slum is a fishing beach. The fishing is a cultural, ecological and economic activity for the slum residents (Immanuell & Rao, 2012). As seen in Figure 2, three of the top tourist attractions in the city of Visakhapatnam are in close proximity to the PJ slum: a 55 acre historical VUDA park (Figure 3) (**1); Tenneti Park and Kailashgiri, a 380 acre hill top park (figure 4), and the Rama Krishna beach (RK Beach) a public beach. Contrary to those tourist destinations, the PJ beach provides space for the fishermen to store their boats, prepare to go fishing and repair their nets but also provides them a place to rest and relax (Figure 6 & 7).

**1- VUDA, which was created in 1978, is responsible for preparing and implementing a Master plan for the Greater Visakhapatnam region along with the surrounding suburbs. 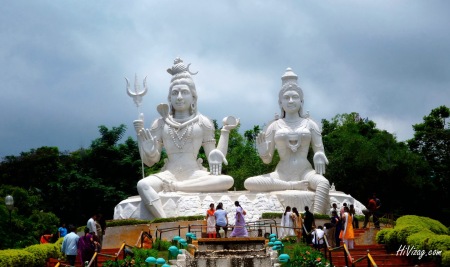 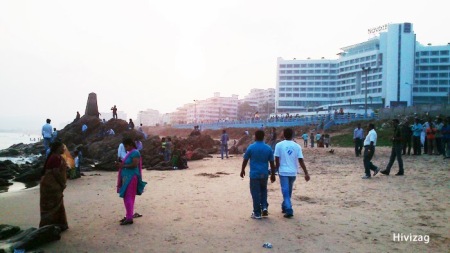 Grama-Sabhas are ancient forms of village assemblies in India. These organizations strengthen the communities’ bonding and bridging capital through dispute resolution and managing religious events (Aldrich, 2011). Pedda Jalaripeta’s Grama-Sabha has existed even before the community was registered and considered a slum in 1969, and continues to be active to date. The Grama Sabha organizes 10-12 religious festivals (Polaramma-Jatara, Nookalamma-Jatara, Sri Rama Navami), each of these festivals aimed at appeasing a Goddess (Polaramma or Nookalamma) or God (Ram) year round. In addition, the Grama Sabha also constructs temples in their community.

The funds for ceremonies and construction activities are collected from the community residents and the fishermen. The residents 90% of whom earn less than $1.25 a day donate 1% of their income for the religious ceremonies. The residents are typically willing to bear the economic burden since it helps them build their internal and external social networks. The resulting bonding capital is critical for Pedda Jalaripeta, since during the off-shore fishing ventures, fishermen rely on friends and family in the nearby boats for first-aid and emergency evacuation. These networks built on the ground save lives on the sea (Focus group, March 30, 2014).

One of the senior fishermen in the PJ slum summarized their social bonding very aptly:

If we are not united our lives will be very difficult. If we are united here, then when we go in to the sea we help each other out and save each other. So that is the reason for our unity. If someone falls in to the sea, the other person who is fishing far away needs to feel the need to go and save this person. Unity is our strength otherwise we cannot survive. That’s why we build temples and conduct festivals. Our safety on the sea is dependent on our unity on the ground.

The Pedda Jalaripeta survived the fire due to the link between slum residents and the government. This vertical link has lead to the improvement in the community’s physical infrastructure. And, the physical transformations in turn, has provided the space and scope for human enrichment, preserving the residents’ access to the fishing beach, and retaining the social capital within the community.

When the community was threatened for a second time by Gentrification processes, the youth leaders in the community sought another vertical linkage; this time with Action Aid an international NGO. Action Aid provided knowledge and resources to educate and empower youth in the community to fight for their human rights, cultural rights and community rights (Philipose, 2013; Equations, 2008).

The story of Pedda Jalaripeta illustrates that poor urban communities can be resilient and survive challenges and disasters all they need is knowledge and support, all they need are linkages to powerful allies.

Here is a link to my TEDX talk.

Patel, S. 2013). Upgrade, rehouse or resettle? An assessment of the Indian government’s Basic Services for the Urban Poor (BSUP) programme. Environment and Urbanization, 25(1), 177–188.

Deepika Andavarapu, AICP, PhD is an Adjunct Instructor at University of Cincinnati. Her doctoral dissertation is based on an ethnographic research on a slum in Visakhapatnam, India. Prior to starting her academic career, Deepika worked as an urban planner in public and private sectors for over six years. She is currently exploring gender issues in the use of public spaces in the context of an urban slum in India.

4 thoughts on “Resilience of a Slum: What, Why and How?”