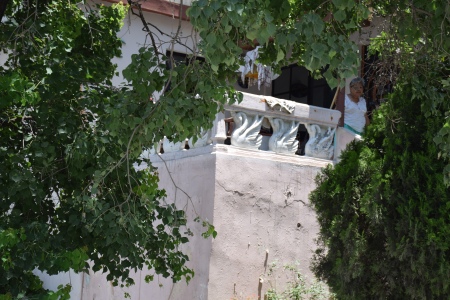 [1] My proposal for this ‘post’ is to introduce the theoretical term Off-Planning as the resilient strategy of Latin American urban agglomerations, the idea came up, after Svetlana Boym’s term Off-Modern, and the use of the prefix OFF in order to confuse the sense of direction, and  to reveal the edges of modern logic. That is a great proposal; however, in Spanish (that is my mother tongue) we don´t have translation for OFF as a prefix, hence, we can not just OFF anything we want. To off something we can use the verbs (turn-off) or (delete); OFF-Planning is proposed in the sense of delete, but as Slavoj Zizek said about these post-ideological times ‘one should note not only what is said, but the complex interplay between what is said and what is not said´. For each OFF there is another ON, it constitutes a different returning place located elsewhere.

Nowadays most of the people around the world live in ‘cities’, we are experiencing a global urbanization phenomenon; the former City was blurred by the Industrial city characterized by the inclusion/ exclusion of people, activities, goods, instruments and thoughts; and the dominance of market and capital; the limitless urban fabric works as the prelude of the ‘uncertain area’, where the urban is not a characteristic, but a promise. Thus, the contemporary metropolises face a historical urban crisis. The consideration of planning as urban theory is at the core of the urban problematic. In 1852 Louis Bonaparte, announced an ambitious program of infrastructure investment prioritizing the urban reconfiguration of Paris. The project was in charge of Haussmann his mission was to help solve the surplus capital and unemployment problem by way of urbanization. Thus, Haussmann set up a system of debt-financed infrastructural urban improvements establishing a whole new urban way of life.

Talking about ‘modern’ urbanisms in America, we can mention Chicago and Los Angeles as knowing Schools. From the perspective of Chicago School, the most important element of the city is their inhabitants, whom they are organized by social classes, culture, and ethnicity. The urban form is developed as a group of evolving concentric zones. Los Angeles represents “The Otherness”, that is why the LA School challenges the characteristic elements that underlie most urban theory and policy (local/global, black/white notions, industrial/postindustrial, city/suburb); it was a success because their practioners considered the population in flux. At the end of the 20th century, Los Angeles was a plural city, there were only minorities. The LA School proposed the substitution of the concentric zones scheme by the keno grid. The urban problematic is constituted by a theoretical and practical crisis; in theory, the idea of city is built and re-built of facts, and simulations borrowed from other ideas of cities. On the other hand, the practical crisis uses this material to make up planning strategies in order to face the urbanization phenomena. Planning as theoretical and practical instrument has been blurred the City. Thus, the key piece at the center of urban crisis is to insist in the city as the unit of analysis.

In this regard, Neil Brenner explains that this ideology has influenced two types of urban approaches: 1) the documentation of city typologies and 2) the use of a flexible term to define the form of the metropolis. The result of these urban researches is to set a sharp difference among urban /non-urban, inside/outside, city/non-city. From a contextualization of Henri Lefebvre’s hypothesis (implosions/explosions), Brenner pointed out the fundamental bases on which to build a new urban theory without an outside.  But how is it possible to delete the outside, if all the urbanization processes have left nothing but outsideness?

In the dictionary “resilient” is defined as “Rebounding; recoiling; returning to the original position”. Thus, the spatial professionals have been faced the urban dominance of borders, following the top-down urbanism path, and place themselves in the ground line, from there, planner’s vision makes possible the uprising of some selected parts from the bottom urbanization:the dialectic perspective is completed: top-down/bottom-up. However, the original position of return was moved from a located place to elsewhere. The urban dynamic of border settlements is multilectic: bottom down-up-bottom. In order to challenge the urbanization phenomenon, Brenner bets to include everything: an urban theory “without an outside”; in doing so, he makes positive what is trying to delete, meaning, that he restores the formal planned city as the only place to come back.

“The City is OFF; lONng live favelas”.