For this post, I want to bring your attention to image and representation, and its influence- importance and potential consequences- when it relates to unrepresented, marginalized, and/or stigmatized communities.

Previously, I posted of a series of posts called “skins +signs” which show-cased and discussed examples of beautification projects, most of them amply relying on paint. You can find other relate posts through this link, which follows the tag “aesthetization ” (https://favelissues.com/tag/aesthetization/)

Following up on those discussions, I want to bring to light a couple of new examples, the first of which is a recent intervention that got quite a bit of press…

Manshiyat Nasser is a ward in Cairo. It is know as Garbage City as the ward’s economy revolves around the collection and recycling of the city’s garbage.

[ As a quick parentheses, I wrote a bit on Manshiyat Nasser and Cairo’s informal settlements – known as ashw’iayatts]  here;  and can recommend a documentary on the ward and its residents, titled Garbage Dreams].

Although Manshiyat Naser has streets, active commerce, and quite a bit of residential development, it lacks basic services and infrastructure. It is also important to point out that the ward’s residents-approximately 300 000  (a city in itself)-are coptic Christians, living in a  city predominantly muslim. With their hands deep in garbage and a minority religion and culture in the city, one can imagine some of the issues linked to exclusion and un-representation.

Earlier this year, Manshiyat Naser was the venue of a large scale graffiti intervention produced by the Tunisian-French artist eL Seed. The graffiti stretched over 50 buildings, and, when seen from afar, stated in white and blue Arabic calligraphy  “If one wants to see the light of the sun, he must wipe his eyes.”

Blue, black, yellow and white now stand out amongst the monotonous brick facades of the neighborhood. Manshiyat Nasser is now very much in the eye of the city, the country and the international community. The fact the graffiti artist and his crew – though with help from a local priest and residents- were able to complete the piece without getting arrested or harassed by authorities, in a city and country with currently very little tolerance for public statements and art displays, speaks quite a bit about the absence of state and representation/acknowledgement in the area. 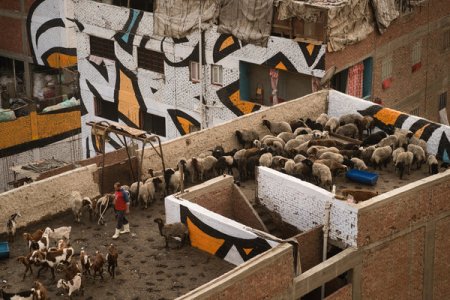 Now potentially on the map, proud and beautified (not yet represented), should leave us standing wondering: What about the structural issues in the neighborhood? The residents? The current stigma? The lacking services and infrastructure? The access to public amenities? The lack of access to capacity building and other opportunities? The list goes on.

Yes, this graffiti could in fact be a great step IF it is a first step … one piece of much larger equation.

Palmitas is a neighborhood located in Pachuca, the capital and largest city of the state of Hidalgo, in the South- Central part of Mexico.  It is nicknamed  “La bella airosa” (Beautiful Airy City) for the strong winds that blow into the valley through the canyons to the north of the city. Though strong in mining, today it is only one fraction of the municipality’s economy. However strong cultural ties still go back to the influence that Cornish miners who immigrated to Pachuca in the 19th century have had.

Las Palmitas, primarily an informal neighborhood in the city, full of cement and cinder-block structures, now showcases over 200 facades of bright lavenders, greens, oranges and more. From afar, one can recognize the swirl, symbolizing the city’s nickname, “La bella airosa”.

The massive mural was a city-government sponsored project lead by Germen crew , a local [Mexican] organization conformed of graffiti artists, seeking to use graffiti graffiti as tool for public art and  a vehicle for social inclusion.

On this mural, Urdesign magazine states: ” On top of beautifying the neighborhood, the project has been a tool of social transformation as during the process, the violence amongst younger people has been entirely eradicated and several jobs have been created.”

With so much visibility and obvious success – not only beautifying-  ‘but also reducing violence and creating jobs’- the government is seeking to replicate this action in other neighborhoods. And why shouldn’t they? To quote a resident who lives in Las Palmitas in a quote taken from the Guardian: “In the morning you wake up and look around and see the colors that surround you. It’s very pretty. You go out and say: ‘Ah, everything is so nicely painted and fixed up.’”