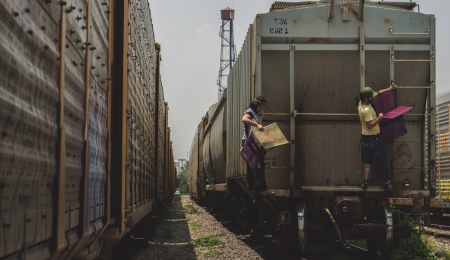 Urban studies are going through a big controversy that threatens the deepest pre-assumed concepts of the discipline. According to the new article signed by Neil Brenner and Chistian Schmid and published by Routledge editors [2], an effort to re-conceptualize what we call ‘city’ must be made, as our earlier definitions seem to become obsolete with all the changes and dynamics that affect urban agglomerations. The so-called ‘new epistemology for the urban’ offers a critical sight of some aspects that have been traditionally accepted as a-priori statements for urban studies. It is not the goal of this article to analyze all of them, but to incorporate some critical views that derive from the ones that directly relate to urban peripheries (physical and conceptual ones) and migrant communities living inside the bounds of cities, in order to anticipate a trans-local look to marginal environments and the architectures involved. By doing so, it is announced a way of understanding the power of small-scale architectural interventions, in the way they can politicize daily activities, connecting local actions with larger processes in which cities are developed.

Breaking the bounds of cities

First of all, as Brenner and Schmid argue, we need to overcome the conception of the city as a unit, circumscribed in a bounded territory, as the urban is more about a process than a universal form: “conceptualizations of the city as a bounded spatial unit must be superseded by approaches that investigates how urban configurations are churned and remade across the uneven landscapes of worldwide capitalist development”. Cities can happen in many different ways, as the fabric of urbanization is multidimensional. In this sense, it is exposed a need to look at urban context of contexts, adding a trans-local sight on what happens in local spaces. These ideas seem to be similar to the ones exposed by architects under the influence of socio-technological studies. To open the black-boxes we should understand first what processes are behind the irruption of architectures in urban landscapes, and how they connect with events happening in geographically-disconnected places [3]. Architecture is then a piece in a grater chain of associations [4] that operates in the space, affecting its potentialities and prioritizing some situations over others.

In this sense, Brenner and Schmid announce three different ‘moments’ that articulate the process of urbanization: concentrated urbanization (CU), extended urbanization (EU) and differential urbanization (DU). CU refers to the urban agglomeration as central place of urban transformation, but EU concept adds the operationalization of territories and profit oriented operations on the land that urbanization requires. DU is “the result of various forms of urban struggle and expresses the powerful potentials for radical social and political transformation that are unleashed, but often suppressed through capitalist industrial development”. So then, implied in this last category, cities are seen by these authors as something that needs an effort to keep making work in a specific way, “creatively destroying” in relation to broader dynamics of modern capitalism. Again, we can see a link between this idea and the one exposed by socio-technological theorists, specifically in Actor Network Theory and the concept of closing and maintenance of controversies [5]. It is important to underline that the potential of this differential urbanism is seen in this authors both to conserve the way system works and to disturb it in any way.

Summing up, we argue that if cities can no longer be seen as a delimited space, peripheral starts to rise as a critical concept. It is important to explain that what we call peripheries has nothing to do with physical situation of territories far from city centers, but with those social collectives, and their modes of urbanization, that don´t seem to fit the official discourse of city rulers and often get relegated to marginal situations. But again, if cities have no limits, how is marginal possible? We try in this article to expone some arguments and examples in which we can recenter the urban discourse to their peripheries, closing the zoom to the micropolitics [6] that are revealed in urban periheria, assuming peripheral as the core of cities. Marginal struggles, and the way they contest and appropriate urban landscapes, serve this article to connect local to trans-local, neighborhoods with global processes and daily acts with bigger possibilities of change. Explorations from other disciplines have been made [7], and also from relegated collectives in relation with urban spaciality [8] but there is a wide field of unknown capacities of architecture in forming dissident ways of living in the city [9].

(Images) La Bestia train works as one of the means of transport for Mexican and Central American migrants who daily travel along Mexico to the US border. People risk their lives while trying to reach the train and it is sadly common to find kids travelling without any kind of security. By designing a portable and pluggable-to-the-train chair [10], a contestation to this conflict was made. The interesting point of this experiment was that the intention was not to close a problematic situation by solving it with design, but the opposite.  By designing a ‘parasite’ chair, the goal was to first recognize a conflict, and then generate a new micropolitical environment, materializing a negotiation channel between confronted actors: railway infrastructure and migrant community. The appearance of a chair generates a potential link in which dominances and marginalities can be questioned. Again, adding a trans-local sight to la Bestia, we can understand the way train’s materiality undoubtedly affect situations that happen far away from the railways it goes over.

[1] A sub-product from the Doctoral Seminar Post-Arquitectura. FARQ. UANL. Mexico.

[5] Yaneva, A., & Heaphy, L. (2012). Urban controversies and the making of the social. arq: Architectural Research Quarterly.

[8] We find a clear example in the way drag-queen collective gain their spaces of representation in the interior of both a space in the city and a closed-minded society, enlightened by Jennie Livingstone in París is Burning documentary.

One thought on “Peripheral Dis ruptions: A Trans-local Look to Marginal Architecture”