The debate between theory and practice in architecture is an old one. Vitruvius presented this endless dispute in the first two paragraphs of chapter one in his book The Ten Books On Architecture:

“The architect should be equipped with knowledge of many branches of study and varied kinds of learning, for it is by his judgment that all work done by the other arts is put to test. This knowledge is the child of practice and theory. Practice is the continuous and regular exercise of employment where manual work is done with any necessary material according to the design of a drawing. Theory, on the other hand, is the ability to demonstrate and explain the productions of dexterity on the principles of proportion.

It follows, therefore, that architects who have aimed at acquiring manual skill without scholarship have never been able to reach a position of authority to correspond to their pains, while those who relied only upon theories and scholarship were obviously hunting the shadow, not the substance. But those who have a thorough knowledge of both, like men armed at all points, have the sooner attained their object and carried authority with them.”

But as inescapable as this dilemma seems to be, today the gap between both practice and theory is closing. And the work of ENTRE NOS Atelier is a good example of a new mode of operation – one that reflects a larger transformation of the profession.

Founded by architects Michael Smith and Alejandro Vallejo, the studio has two main branches yet one main objective: thinking, teaching and doing architecture all in parallel. For Smith and Vallejo, ENTRE NOS Atelier and ENTRE NOS Comunidad comprise a continuum between practice and theory – between doing and thinking. The first one is the team’s professional practice; the second, its academic extension at Universidad VERITAS. The team of two young professionals spend their time questioning architecture’s and architectural education’s raison d’être while designing and constructing with their students. While Smith directs the foundation studios at the School, they both teach an upper level studio that focuses on ‘making’. The result of this continuous enquiry of the profession and how should it be taught, finds its light in the team’s projects – all which share a clear social agenda that breaches traditional practice. Designed through critical participatory processes, validated by communities and financed through strong entrepreneurial efforts, ENTRE NOS (which translates as “among us”) actually creates an atmosphere and a methodology through which all actors become a critical voice, a manufacturing community and an educational project that includes professional and non-professional groups

As quoted on an article – an exemplified by their work for the Käpäcläjui Indigenous Training Center, the team’s focus constantly overlaps their political and ideological agenda with particular and very conscious reflection on the subject of architecture while construction: “During these management processes, the service function of ENTRE NOS Atelier was to coordinate among the different interests, and to serve as partners of architectural ideas interpreted from the users. The technical coordination with the construction company was also relevant, and their extensive experience with the selected material (wood) to optimize and explore beneficial technical-constructive criteria for the project. The experience both in the design phase and during construction, is internalized as the constant opportunity of awareness of the surroundings; promoted by the consent and availability of the project team, and to positively impact the community and consequent architectural identity of the project.”[1]

Overall, ENTRE NOS efforts to keep the ongoing exchange between thoughtful education, continuous critical debate and the act of building, is evident in their work. Often physically found in the territorial periphery, its conception takes place in both academic and very dynamic communal and practical environments – blurring the line between practice and theory while educating new spatial agents about their abstract, yet very real craft. 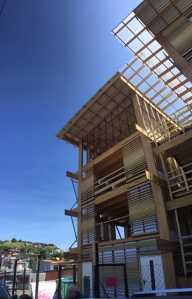 Images: The “Cueva de Luz” (Cave of Light) project in the informal settlement of La Carpio in San Jose, Costa Rica is one of the examples where critical thought, entrepreneurial spirit and collaboration between citizens, students and designers became gave way to a constant questioning of the role of academia and practice in architectural education.