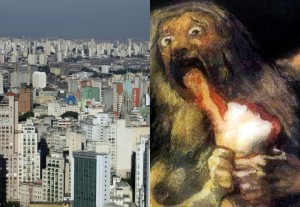 All countries that constitute Latin America are developing countries; approximately 124 million of Latin American urban inhabitants live in poverty. The south-continent has always been characterized by the concentration of population in a few cities. However, nowadays the megacities of the subcontinent (Sao Paulo, Mexico City, Buenos Aires, among others) concentrate only 14 per cent of the urban population; while more than a half of urban inhabitants live in “secondary metropolis”. In Latin America there are approximately 55 cities with a population that ranges from 1 to 5 million of inhabitants. Hence, one may ask: Is this urban structure “modern”?

According to Marshall Berman, the modern life is a combination of different processes like scientific and technological advances; the industrialized production; urban growth; mass communication systems; the state and its bureaucracy; social movements; and the capitalist market. These processes are called “modernization”; the group of values and ideas that result of modernization are called “modernism”. In the twentieth century, the open-modern visions were substituted for their opposite; the fundamental polarizations have place in this period, and remained until the present time (center vs periphery; formal vs informal). Simultaneously, another kind of modernism was developed (postmodernism?), it was based in the idea of break boundaries between all human activities; although, the lack of criticism was its weakness. As Marx said, in the modern life “everything is pregnant of its contrary” and “all that is solid melts into air”; thus, modernity is an ongoing process [1].

Cities are the figure of modernity; they represent an allegory of the crisis; although, one can build from them “new urban horizons”, since the idea of modernity is based on changing and evolving. The urban modern movements were developed in a multiplicity of regional forms, which were exported through colonization process, strengthening the modernizing world system. The first crisis of European modernity shaped the principal cities of the time; from this spatial organization it was established the symbiotic relation between urban fabric and industry. In 1960 a new urban crisis, in almost every city in the world, has occurred, pointing the end of the economic “boom” of the industrial countries. The national and regional centers for control of international economy and responsible for the urban order, collapsed. The crisis of capitalism resulted in a crisis of modernity which provoke to the generation of new forms of modernization as a tool to redirect the perspective and create practical and theoretical tools that would give meaning to the new world revealed [2].

The urban crisis has exposed weaknesses and deficiencies of the theories and urban practices used till this time (Chicago School). From the neo-Marxist School of Urban Political Economy it was created a new urban paradigm (the modern Fordist- Keynesian metropolis) as an analysis tool for the comprehension of the post-modern cities. The efforts became re-rooted in the proposals of Engels and the main concern about the reproduction of poverty and inequality. Urban planning remained as the key piece of spatial re-structuration, despite the fact that it was seen as a tool at the service of the capital and the state. The urban organization described by the Chicago School did not disappear, however, its centralized structure was blurred, and the city-space was fragmented; after that, a process of recentralization (market and state) occurred, the peripheral fabric increased (favelas) [3].

Since the latest twentieth century, studies on the subject of urban, point out some global transformations that force us to rethink both the nature of human settlements and the proposals from urban planning professionals. The first transformation is the conversion of territory in urban area; the second transformation is the rapid growth of informal urban development (economy, employment, housing, lifestyle); and the third one is the emergence of cities with more than 10 million dwellers.

The “informal sector” as a concept was born in early 1970; at that time two groups were identified: a public sector and the service providers, which is integrated by small shopkeepers, street vendors, porters, craftsmen, messengers, barbers, and staff service, who take over the streets, sidewalks and alleys of developing countries. At the end of the 1970s, the informal sector was described as “urban poor”, people living in slums or squatter settlements. The first distinction between formal and informal sectors is based on the different types of employment; unprotected urban labor markets are called “informal”, in opposition to the formal sector protected market [4].

The megacity is considered the urban form of the modern era; it has traits of hypermodernity, but also a sharp inequality. The contemporary city is characterized by the existence of the space of places and the space of flows, the timeless time and the hope of the glacial time, the electronic home, and the virtual reality as an everyday matter. The informal fabric is devouring the planned “modern” city: modernity acquires new geographies.

2 thoughts on “Favelas: The “Real” Modernity in Latin America?”