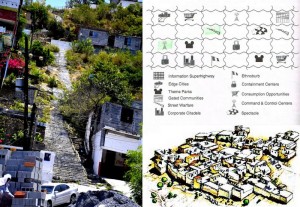 “The city may be dead”, Lefebvre seems to say, but “long live the city!”…

Since the latest twentieth century, spatial studies point out some global transformations that force us to rethink both the nature of human settlements and the proposals from urban planning professionals. The first transformation is the conversion of territory in urban area; the second transformation is the rapid growth of informal urban development (economy, employment, housing, lifestyle); and the third one is the emergence of cities with more than 10 million dwellers, also called megacities. On these basis, we can continue the human societal development process: urban-urban/rural-urban again-, then the peripheral fabric of Latin American cities  (favelas) could be considered the new proto-cities of the twenty- first century. But let’s start from the beginning.

For thousands of years, cities have been considered the places where civilizations are being developed. Edward Soja [2], via Jane Jacobs [3], places the proto-cities in the first step of the social organization. Jacobs’s hypothesis is based that it was the fact of interdependence and creativity economies of the first cities, which made possible new job opportunities, including agriculture. The separation that was made between urban commerce and industry from rural agriculture is being imaginary; they both come from the same source. Building on these ideas, we can say that rural settlements are the result of an urban cultural practice transplanted.

Human societies live in groups; the social organization was manifested into city-space; the shelters (tents or huts) were placed following a circle shape, as a settlement. Approximately 40,000 years ago, hunters and collectors around the world began the process to become sedentary. Recent research has shown that the camps of hunters and gatherers were developing a complex structure: base camp, smaller mobile camps, hunting stations, caves used as a temporary shelters, and workshops to make tools. The sedentary processes were vital to the consolidation of the agrarian society, the villages grew to significantly size; the social order was based on groups that shared family or ethnic ties. At this point we can talk of proto- urbanization.

To the list of influences related to the origin of the cities, some researchers add the stimulus of the urban agglomeration (synekism), which occurs in all human settlements; most conservative scholars believe that the result of this agglomeration was the virtual creation of the city and the state, while the critical sector of researches defines synekism as a fundamental force that was present throughout the sequence of human societal development, outlined in the proto-cities and continuing in the present time. Considering the force generated from the stimulation of the urban agglomeration as a key piece for the comprehension of the urban phenomenon, we can change the conventional sequence of the social organization and place the city before the Agricultural Revolution, causing not only the development agriculture itself, but also the emergence of farming villages, rural life, shepherds and farmers, the writing, class formation, and the state.

During the last thirty years of the twentieth century, Latin America experienced a rapid increase in urban population; the needs of new inhabitants exceeded the capacity of governments, and the formation of favelas becoming common. The intervention/inclusion proposals for the squatter settlements have been thought from the outside: “superblocks”; serial housing; habitat production by participation processes; public space; and architectural artifact as public space. Nonetheless the efforts of the spatial professionals, the other urbanization are built parallel from the “formal planned city”; according to the statistics, the South-continent has 623 millions of inhabitants, and approximately 187 millions of them live in poor conditions (favelas’ dwellers). Hence, concepts like sustainability, the right to the city, urban rights [4], have become complex ideas that challenge any urban future. The nature of human settlements and the proposals from professionals need to be rethinking:

<<The city of Ur, the point of departure…

The Favela city, the point of departure… The City was not formed in progressive stages; it appears fully armed, a master stroke executed all at once; the primordial Favelastadt, the eternal model of everything…the basic formation… Every from that is more “evolved” is like a palimpsest: it covers a despotic inscription…>> [5].