This is the case in Plaza del Sol, in the town of Baruta, South-East of Caracas. The land, a municipal property, is destined to a public market and a bus terminal. Despite of many projects and plans, it has been empty for almost 30 years. Now, a private developer is building a commercial facility in a small plot where is not possible to accommodate all the parking spaces needed, so he is force to build the parking quota elsewhere. It is the perfect opportunity for a win-win association, private proving funds and obtaining parking, public providing the land in exchange of public space

Although the project has only started, and we are just working in the conceptual drawings, we are so excited that we want to share the process.

Baruta, a traditional town with narrow streets, has been absorbed by Caracas, and has become a transfer and supply station for the new urban areas of the south east. Minibuses crowd all streets during day and vacant lots during nights, delivery trucks occupy the sidewalks. After the old market was demolished, many informal vendors have taken up the streets, adding to the chaos. 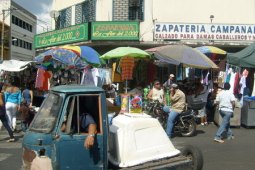 Empty land is so scarce that every actor has more than a few demands:

Following the existing master plan, the municipal authorities have asked for the construction of a new street and a public square both of such size and quality as to pay for the land value. As half the plot is invaded and there are no funds for compensate the tenants, the project should be conceived as the first stage of a bigger public facility. The street vendors, after many years of empty promises, feel entitled to use all the space, and wish for a market building or at least for a market square. The private developer, of course, wants as many as possible parking spots, keeping the costs to the minimum, but more importantly, avoiding delays and long negotiations.

And, on top of that, we, as architects, have our own agenda.

We believe the value of this partnership should be based more on the intangible value of activating the pedestrian system that will revalue the perimeter of the traditional block distribution around the Bolivar square, by linking tree public spaces, now isolated, into a landmark, to become a portal of identity within the city. An element to state Baruta’s identity within the metropolitan area.

Aiming to achieve more than a square, the project must be a strong link to the town’s institutional center, both physically and conceptually; stressing in urban words that people and institutions respect the town history.

So far, we have proposed a square in levels, allowing for plenty of parking space, with bridges connecting the neighbor public buildings and spaces. We hope to be able of posting advances very soon.