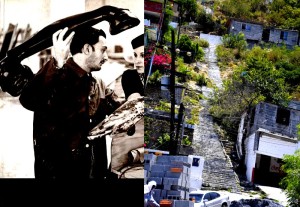 [1] There is an association between future and the perception of time. Castells explains that the network society lives a sustained present, it means the dominance of a timeless time [2]. Under these circumstances, it would seem that everyday life in border settlements (Favelas) does not have time for anything, but the repetition of old traditions; to think in future looks worthless.
The selection of the cultural elements that shaped identities, it is not an autonomous process; traditions are defined by asymmetrical power relationships [3]. However, the “sense of choose” is the first step to form the identity-subjectivity of the border inhabitants, and this rough effort represents the continuing spatial resistance. Favela identities are shaped by the recurrence of “traditional” traditions; peripheral inhabitants embrace them uncritically. Frequently, old traditions do not contribute in the subject development, but the opposite. There are old traditions (conventional), border traditions (invented-evolving) and new traditions (futural); the last category represents the spatial hope [4].
Spatial hope is a utopic expression. The concept of the spatial justice appeared in the last decade of the twentieth century, when it is reconsidered the urban proposal of Henri Lefebvre. Agreeing with Edward Soja, the complete justice is unachievable; the author points out that justice and injustice are infused into the urban geographies of all scales.
Henry Lefebvre explains that the “right to the city” is related with the right to information, to be different or to choose difference. In the phrase “to have the right” are implied civil and human rights. The citizen has the right to live and to build his city in a different way, challenging the vision imposed by the state, the market, the bureaucracy, and the spatial professionals (including scholars) [5].
In Revolución urbana y derechos ciudadanos, Jordi Borja established an initial list of “citizen rights” (urban rights), like: the right to housing and place; the right to public space; the right to the beauty; the right to healthy natural environment; the right to difference (preferences, urban behavior, and personal relationships), among others [6]. The urban rights are a contribution to the geopolitical culture; thus, as public politics, they can modify costumes related with old traditions, this process is the basis for the creation of border traditions.
Futural traditions are going to build spaces of hope; before that, many invented traditions will take place. The proposals of urban professionals need to be thought as utopias, but believing that at least part of “the dream” could be possible. Hence, the mapping of Favela traditions seems a hopeful project.
The best way to document the spatiality of Favelas is capturing fragments of everyday life, and then later join them knowing that not only represent real / real facts, but also virtual and imagined realities. Maps, as well as their changing virtual counterpart, are tools that enable the transformation of reality, through the mapping it is constructed the hyper/real geography.
The conventional maps (drawings) will represent the maps of location; from there it will be possible to build an infinite number of cognitive-spatial maps or approach maps (windows to territory), when these “new” maps are drawn they are transformed into maps of re-location, thus at this point there are two options: to add more approach maps or to trace a critical pattern, to create maps of intervention. The mapping process follows an uninterrupted spiral. First approach of fragments of cognitive-spatial maps:
a) Data and graphical maps. Monterrey is located in the northeast of Mexico; the metropolitan area of the city, is constituted by twelve municipalities; it has 5,000,000 inhabitants; within the metropolitan area of Monterrey there are registered 60 “polygons” of poverty. The barrio Independencia is considered the first periphery of the city; in a map of Monterrey dated in 1894, the barrio appears as part of the regular trace of the metropolis, the peripheral neighborhood was planned to shelter stoneworkers from San Luis Potosí. Around 1950, “La Indepe” was expanded southward, the orthogonal trace was lost, and the “border” geography gained presence. In recent years it has been used as a strategic point of transactions between different groups of the organized crime. As the city was growing up it became in a central area.
b) The “other” Cleopatra. Estela is the Queen of the barrio Neo-Independencia (Tanques de Guadalupe), she has been living in the settlement for more than 30 years. She organized the people and distributed the land between families who took the south area of the mountain; during many years they have been tried to be part of the formal city, offering the purchase of the property, even they paid for the drawing of site maps; although, everything has been useless.
Nowadays, Estela represents 300 families; because of their informal condition, the procurement of basic services and urban infrastructure, has been a constantly struggling. The achievements are obtained from the local organization, strategic alliances with political parties and leaders, and the negotiation with internal power forces (neighbors, army, and “drug cartels”). The barrio has its own transport and security networks; the security of the settlement is based on communication by cell phones, if a stranger enters the neighborhood, he or she is intercepted, also if there is a presence of a drug cartel, the routes are immediately modify. 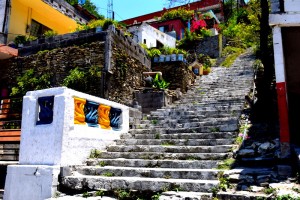 c) Ángel [7]. September 25th, 2011. Monterrey, Mexico. The Governor of the State and his team are in the neighborhood (Tanques de Guadalupe) for the opening of a “Community Center”; and Ángel is looking at them through the sight of his 50bmg gun. Ángel lives up to the hill, from there he can be aware of all the movements in the area: the activities of his neighbors, the presence of the visitors, the “flacons” of the different drug cartels doing their job in every corner, an “army” of communication antennas Dish an VETV decorating the roof of each housing, and finally, the largest “inside” city. For his vigils, Ángel always has a six-pack of beer, a marihuana cigar, three different cell phones, and an ipod with his favorite music (corridos). The opening is finished, Ángel receives a message announcing the presence of a governmental security convoy, after read it, he drop the gun on the table, while he is singing…
d) Tigres del Norte (songs: Jefe de jefes and Mi buena suerte)
Tigres del Norte is a group of popular Mexican music, its style is known as regional mexicana or norteña; it was founded in 1968 and its members are born in Sinaloa, but they have a lot of years living in San José California, they are known for including in their repertoire narco-corridos, songs about the life of Latin American drug cartels, but also romantic songs are included.
Jefe de Jefes:/ Soy el jefe de jefes señores me respetan a todos niveles… han querido arañar mi corona los que intentan se han ido muriendo/. ( Boss of the Bosses: /Gentelman, I am the boss of the bosses, I am respected in all levels…many people have wanted scratch my crown, those who have intented it, now they are died/).
Mi Buena Suerte:/…Eres la consentida, la dueña de mi vida, porque me has hecho feliz…mi medallita, mi escapulario, dame por siempre tu protección/. (You Are my Good Luck: /… You are my darling, you own my life because you have made me happy… you are my religous medal, my escapulario, please give me your protecction for ever/).

e) Cidade de Deus (2002). A film by Fernando Mireles
This film tells the story of a group of people living in the social housing development “Cidade de Deus”; the movie also shows the process by which the settlement was “favelized”.
_ A picture could change my life, but [in Cidade de Deus] if you run away, they get you, and if you stay, they get you too. It’s been that way ever since I was a kid…Sorry. I forgot to introduce myself. My name is Rocket [and] that’s Shaggy. To tell the story of the City of God, I have to start with him…
(initial dialogues of the film)

Traditions could be represented by words and images, also it is possible to represent an image with words; each of these elements could be de-constructed in urban manifestations. From here, multiple connections could be made (Patriarchal tradition – Cleopatra-Estela- Tanques de Guadalupe- you are my darling- my religious medal-I am the Boss of the bosses- City of God- negotiation with internal power forces- Informal condition- [in Cidade de Deus] if you run away, they get you, and if you stay, they get you too-the routes are immediately modify- Ángel lives up to the hill, from there he can be aware of all the movements in the area-); each of the connections would be a map, it means, a network in the mapping process.
Perhaps from the superposition of post-maps of border traditions, could be possible the creation of “shifting” protocols of communication [8]; it might be a step in the way to restore and re-humanize the idea of urban. Tracking Favela traditions will discover that all that once was thought as the end of tradition; now it represents its future.

[8] On the network society culture, Castells recognizes that since the contemporary society is global, there is multiplicity of cultures, living together and struggling with historical and geographical aspects from different areas of the world. The challenge is to find ways of communication, which solve the distance between each other.