I just finished reading Justin McGuirk’s book Radical Cities. In it, the author describes some of the drastic urban conditions that have developed in many Latin American cities – many of which we often comment in this blog. Through a series of case studies McGuirk presents the ‘radical’ attempts being made in the region to empower citizens living in undesired conditions so they can become a stronger political force and generate much needed changes.

From the Tupac Amaru social movement turned into housing project in Argentina and other places in South America, to examples such as PREVI’s and ELEMENTAL’s incremental housing projects, the book describes – sometimes in depth and sometimes just on the surface, the complex cases of Rio de Janeiro, Caracas – and it’s Torre de David; Bogota, Medellin and Tijuana. For each case, the author reaches out to well-known political or professional figures – mostly architects, urban planners and academics, to further explain the ideas re-shaping these cities where “the rationalist vision of the twentieth century is giving way to the ineluctable logic of the informal city.”[i] In the author’s mind “no other region in the world has demonstrated the kind of collective effort and imagination that Latin America has in addressing the chronic symptoms of rapid, unplanned urbanization”.[ii] As such, McGuirk parallels the events in the region with what he calls the production of “activists” – those with a new and radical approach to making architecture: emerging agents that re-politicizes space.

Since there are other posts in this blog that analyze many of the same issues that McGuirk does, it is not my intention to write a descriptive book review, but rather to point what others have already done to then be able to add a few comments. And so, I quote Rowan Moore‘s book review from The Guardian:

“The complexity and scale of the subject gives rise to the book’s weaknesses – the cities of an entire continent make a big subject for a medium-sized book, and any one of the projects McGuirk describes could justify a volume of its own. So depth can be lacking. Unable to delve fully into the contradictions of a given situation, he often can only reach tentative and impressionistic conclusions, and he’s at his best with places he knows best…” [iii]

And I tend to agree with Moore. The historic, economic and social contexts of each of the cities the book describes and the actions being taken by ‘activists’ to change them are too complex and impossible to analyze and understand in depth in one chapter. Furthermore, the book seems to forget that in the duality of the formal-informal city, the architect’s or the academic’s work is the least. And so, I agree with Sara McTarnaghan when she points out that:

“Despite McGuirk’s celebration of the informal, his analysis favors the creativity and charisma of architects, politicians and organizers, who are celebrated for accomplishing big innovations on small(er) budgets, over the discrete actions by individuals responsible for building the informal city. In doing so, the author risks undermining the adaptive capacity of residents and communities to design and build locally. In actuality, the “radical” nature of Latin American cities highlighted in the book reflects a reconceptualization of architecture to directly engage with informality using scarce resources, instead of a new/radical understanding of who occupies or has a say in our urban future.” [iv]

Reading Radical Cities brought to the forefront of my interests what I think is a critical issue: the need for radical changes. Although change is a constant in the work of activist citizens, I worry that sometimes the idea that small changes or small-scale urban interventions (often in alienation from broader institutionalized systems) are enough, is conveyed too often.

The success of many of the stories in Radical Cities is often the product of a strong organization, institutionalization and collaboration of the political, economical, social and governmental groups. The pivotal role that architecture plays is undeniable, however it is only the expression and afterwards manifestation and materialization of the larger system. It is our responsibility to understand, analyze, critique and get involved with the mechanisms that shape such systems. The activist-architect is not just proactive, is someone who sees the broader picture and that is political beyond space manipulation. The activist-architect gets out of his comfort zone – as citizen, practitioner and academic. He questions and participates on the larger institutions and the political and economic processes that produce the current types of urban inequality and inhabitation. He digs and understands the political, economical and social forces that restrict the goal of a more equal society – and acts on them.

I hope this short post serves as a way of self-criticism for architects and architecture students. As Andrew Carman said in his last post – maybe we are being hypocritical sometimes. It is up to us to commit to that level of change. But for now, let’s be critical and deeply analytical of the work that we, as design professionals or spatial agents, are doing. Because as Felipe Hernandez argues when discussing many of the same projects that McGuirk writes about in his book:“visibility and mobility may well lead to inclusion, as is being widely argued, but the poor are still poor and ghettoized” [v] 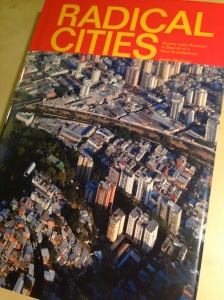