Forty years ago, a group of citizens in Bogotá invaded the streets with bicycles. This citizen initiative was the beginning of the known ciclovía that brings the streets back to the people. From the initial 5.000 citizens in 1974, the ciclovía has grown to actively move more than 1 million people every Sunday in Bogotá. Today, more than 50 cities in the world have replicated the ciclovía as a mechanism to integrate society and foster healthy cities.

Beginning of the Ciclovía in Bogotá

In the same decade (70s) in the old continent, the car-city model invaded Netherlands. They started to destroy houses to built highways for cars and as I mentioned in my previous post children and citizens mobilized to make cycling a priority in the city. (Why is cycling so popular in the Netherlands?). Due to this citizen engagement the government started to change the car-city into a sustainable city through cycling. Today, Amsterdam has more than 400 kilometers of cycle lanes and 38% of the mobility is done in bicycle.

These stories of bicycle activists have been present in our mind as the glorious urban revolution of the past. However, these stories are not to be discontinued in the history books but to be present in our cities today. Recently in Hong Kong, I experienced this continuous wave of activism. A group of citizens organized a critical mass ride to honor the death and injured cyclists. In 2013, there were 2.526 traffic incidents and 8 cyclists died in Hong Kong. With music and colors this critical mass peacefully demanded more security for cyclists.

Citizens are mobilizing not in Hong Kong but in cities all around the world. Every day, new cycling groups emerge in America, Europe, Asia and Africa to make cycling a priority.

This active pressure on governments is starting to transform policies. Governments are starting to change their priorities towards more sustainable modes of transport. A good example is the growth of the bike-share systems in the world that went from hundreds of bicycles to nearly a million in the last decade. 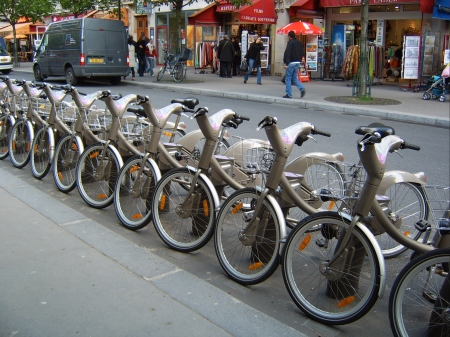 Bike-Share Systems in the World

Cities are changing and the bicycle is becoming the center of a new urban evolution. To continue this uprising we must join efforts and use creativity as a tool to transform our cities. We need more cycle lanes, safer streets and more resources for cycling. Next year Medellin will host the World Bike Forum, a citizen event, that unites cyclists, experts and policy makers to make the bicycle a priority in our cities. This event is going to be a great opportunity to built a collective action towards inclusive, healthy and sustainable cities for all.

4 thoughts on “The bicycle uprising in cities ”