My current job allows me to spend long hours looking at the plan of Mumbai, and even as I am fixed on completing tasks that I am assigned, I cannot stop myself from thinking tangential questions about how this form has come to be. Especially when I see severe aberration in the order, like finding irregular shaped plots abutting orthogonal plots right across the street. Sometimes I am lucky enough to bump into people and texts that help me complete the story. For e.g. they tell me that the irregular shaped plots were previously agricultural lands that were organized through the logic of soil fertility and somehow remained unplanned by the real estate logic of orthogonal organization. Its these Ah-Ha moments linking urban form to urban history that make my job interesting. 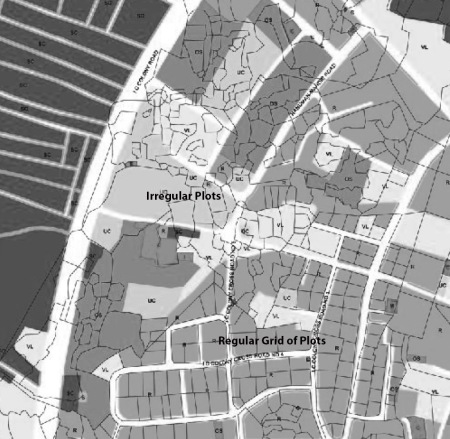 This blog post traces the some of these discoveries. Especially those related to the urban form transformations done by the Bombay Improvement Trust (BIT) formed in 1898. I revisit their work not only because much of the Island City owes its form to the operations of the trust but also because many of the problems and solutions deployed in 1900s have a ring of familiarity to the present. (Its also because I am currently reading Nikhil Rao’s book “House but no garden” and his text that has helped me put together the analysis given below:)

The Bombay Improvement Trust was formed in response to the terrible plague of 1896. The British Government could no longer ignore the governance of the native town and set up the BIT with the lose agenda of urban “development” – mainly solving the housing problem that had led to overcrowding in the city and providing hygienic spaces to make sure the plague does not return.

The BIT worked on:

Although interesting, the blog post does not focus on the housing or land reclamations made by BIT. I am interested in the ways in which the trust understood and used the “Street”. BITs understanding of the street was very different from that of the native town. While for the native town the street was a social space for mobility, gathering and commerce, for the BIT the street was a system that clearly demarcates the public and private property, creates hygienic neighborhoods, and provides new linkages that could decongest the city center. I further elaborate these contentions 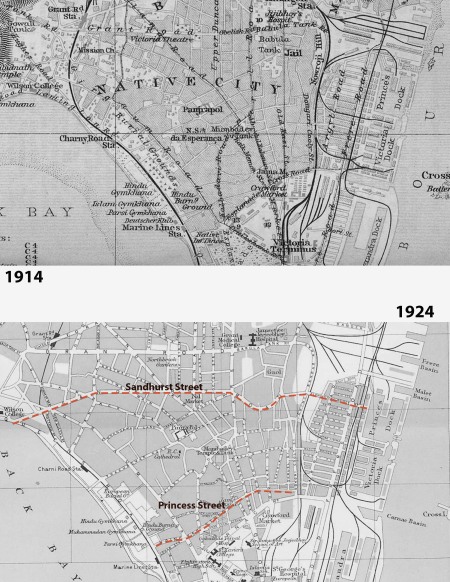 Ranjit Kandalgonkar’s ongoing work on the community institutions in the inner city in the early 1900s shows that before the BIT was formed hygiene and health was being addressed by self/organizing philanthropic trusts belonging to different communities that were living in the inner city. Religious trusts built drinking water fountains, hospitals and provided housing for the communities that came to Mumbai. But the scale of this work was small. After the plague of 1896 the British government was forced to take on the responsibility for the health and hygiene of the native town. The government blamed the plague on the miasmas in the air caused by overcrowding bad light and ventilation. The street was seen as a solution to this problem. The BIT began to widen streets in dense neighborhoods of the inner city and built east west streets, namely Princess street and Sandhurst street to bring in fresh air from the sea into the overcrowded neighborhoods of the native town.

As Nikhil Rao states in his book

“the Trust used the street as a sort of battering ram for its vision of orderly and regulated building. If the wadis and mohullas of the older parts of the city were marred by insanitary and ill-ventilated housing, it was because such areas were not penetrated by municipal street patterns that bore modern sewers, drains, and ventilation”[2]

However street building in the native town was a violent activity that brought down many homes and was very unpopular. So the trust began building suburbs with a view to launch an indirect attack on the “sulms” of the inner city. 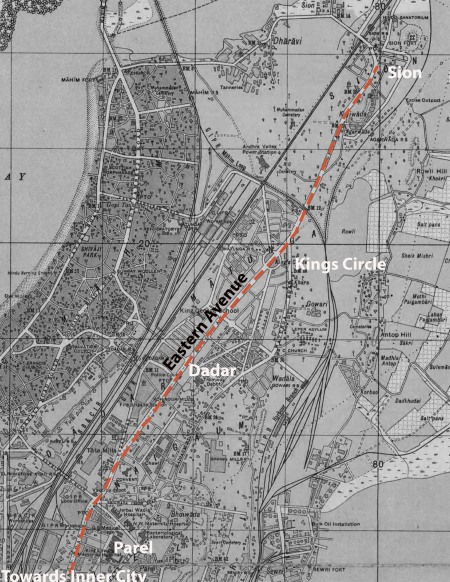 The Eastern Avenue on the Map of 1933. Connecting the Inner City to the Suburbs,

Eastern Avenue, the street connecting the new garden city suburbs of Dadar Matunga Sion to the inner city, was unusually wide as per 1900 Indian standards and created a stir amongst the planners and landlords. Nikhil Rao’s book once again gives us an account of the debate on the plan to build the Eastern avenue . Dinshaw Vacha, one of the members on the BIT was perplexed by the amount of money that was being spent on the Eastern Avenue to the suburbs when the crowded inner city required much more attention. To this Chairman Orr explained that “the Eastern Avenue provided essential access to the new suburbs in the north of the island and hence constituted a far more cost-effective “indirect attack” on the problem of overcrowding and insanitary housing”[3]

The only way in which the suburbs were going to decongest the inner city and attract the middle classes was if people could quickly get to the city center for work. For this the street had to function as a wide space for fast mobility, unencumbered by commerce and social gatherings. Although a century later this seems like a rather obvious idea. Wide streets behaving like expressways for quick mobility were a novelty in 1900 Bombay.

The new suburbs of Dadar Matunga and Sion were organized along a well laid out street gird. Bylaws regarding height were linked to the street edge. According to the trust although the wadis had courtyards for light and ventilation they were not public spaces. Hence when the property prices went up nothing stopped the landlord from building and renting more homes in those open spaces. This is what was leading to congestion in the inner city. On the other hand the street was a public space maintained by the state and would not face such a tragedy of commons as courtyards in the wadis. Thus the street would ensure a regulated index of open vs built space[4]. Uniform access of infrastructure and ventilated open spaces ensured stable property prices in a neighborhood.

For the BIT streets were tools to draw lines between what was public and what was private. It was a system with which the state could assure light and ventilation of neighborhoods and ensure health and hygiene of all those who lived there. What happened on the street was meant to control what happened in the neighborhoods. It is under the BIT the town began to perform like a planned city controlled by the state.

One thought on “Streets of the Bombay Improvement Trust”