The protests in Brazil began over an issue of a fare increase on public transportation, and grew to encompass demands for better public services and protests over the amount of public money being spent on the World Cup and the Olympics. Economist André Lara Resende writes that after the economic and political changes in Brazil over the last decades, the protests cannot be “blamed” on pure economic hardship, inflation, unemployment, lack of democratic representation, authoritarianism, or lack of freedom of expression, as they might have been in the past or in other countries. He suggests that the reduction of absolute poverty in the population has increased the demand for quality services, and that social media allows people to see how many others feel as they do, and to assemble before government leaders get the memo. 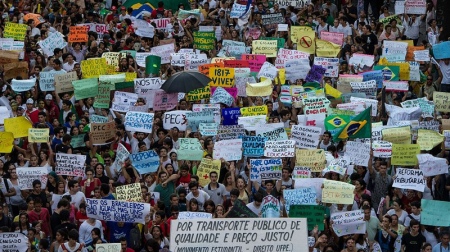 According to Resende, the issue of mobility in large cities is paradigmatic of the exhaustion of the production-consumption model, where the automobile industry is the pinnacle of industrial development and the car is the supreme symbol of consumer aspiration. The transit hell of the large cities, which only gets worse the more successful development projects are in Brazil, is the ultimate expression of the complete impossibility to proceed without a thorough review of objectives.

So what are the institutions that will review, define, and enforce these objectives? Apparently, they are still in their infancy, and Brazilian architects and urbanists are trying to make them grow up.

The Brazilian Institute of Architects  (IAB) issued an agenda for public discussion on June 29, 2013, in solidarity with the protestors. It responds to three of the issues raised “in the street”. The IAB insists that transportation, land use, and housing are inseparable urban functions that require permanent public policies, and argues that improvisation and discretion are not compatible with the level of development achieved by the country.

What’s striking about these statements is what they reveal about the lack of coordinated planning and the frustration of the professionals working within that context.

The first issue on the agenda is “Mobility and Planning.” Here, the IAB’s highest priority issues are public transportation for home-work trips, multimodal networks, and improving pedestrian public space and bike paths.

The IAB’s proposals are 1) to implement permanent systems of urban and metropolitan planning, to be treated as a function of the state, 2) to create a fund for the support of transportation studies, and 3) to make public investment in transportation conform to the Urban and Metropolitan Transportation Plans and the National Policy on Urban Mobility (PNMU).

The second issue the IAB addresses is “Mobility and Housing.” The IAB is concerned about the physical extent of urban agglomerations and its effect on transportation and quality of life, and believes that housing development needs to focus on urban infill, densification and upgrading of favelas and peripheral settlements. (Unfortunately, the federal government’s current massive housing finance plan, Minha Casa, Minha Vida (MCMV) seems to encourage cookie cutter, urban-sprawl type development.) The IAB supports offering housing construction loans directly to families, thereby cutting out the construction companies that are producing housing under MCMV.

The third issue is “Transparency in Public Projects.” The IAB is convinced that one reason for high cost overruns on public projects is the fact that the designer only designs a “basic project,” while full construction documents are produced by the contractor who has won the project. The contractor details, prices, and builds the project, which encourages adjustments, overpricing, and corruption.

Architects and urbanists in Brazil are taking hold of the energy and momentum released by the protests and using it to make a stand for sound urban planning policies and the strong institutions required to enforce them. Hopefully, they will achieve critical mass and Brazil will benefit from the kind of long-term urban planning policies it hasn’t had in the past.

Many thanks to Julia Michaels and her blog RioReal.com for links to interesting articles and news of events during the protests.

6 thoughts on “Brazilian Architects and Urbanists Seize the Moment”