When news of the Brazilian protests of began trickling northward, my first thought was of the bajillion times I had heard Brazilians say “Por isso que o Brasil não vai pra frente” (“This is why Brazil isn’t moving forward”). It’s a phenomenon with the makings of a stereotype: Brazilians will complain to each other, but the notoriously corrupt politicians remained smug and comfortable, counting on the fuse to fizzle right as it’s lit. I don’t know that I ever put extra emphasis on a Brazilian for civic complacency, after all I’m a child of American suburbs, I know public ennui from up close and personal. But I was elated and proud to see the fuse finally burn down as Brazilians took to the street by the hundreds and thousands and eventually millions to express anger and frustration with bus fares hikes, inordinate mega-event spending, police violence, ruling-class corruption, and generally feeling left out of their own system.

There is an exuberance, a compassion, even an elegance to the the images that surfaced and the slogans that made the news that are all uniquely Brazilian. I believe the images of protester’s shadows cast on the underside of the Congressional Building’s dish, will be revered by lovers of democracy for decades to come, much like the Tiananmen Square grocery-getting tank-blocker. I couldn’t help but think (only knowing what I know about his politics) that Oscar Neimeyer was smiling down from his drawing board in the sky, finally able to approve the use of his building.

But what has struck me most is that the protests seem to reflect a sentiment I heard Eduardo Paes offer in his 2012 TED Talk. He said, “A city of the future has to be socially integrated.” The mayor of Favela Pacification and Morar Carioca, Paes has truly undertaken some immense changes, and has seen his share of false starts and valid criticisms. (The video is worth watching. And the comments column speaks volumes in short phrases).

But that particular sentiment, of social integration, rings true regardless. Furthermore protesting a fare hike of a seemingly meager R$.20 strikes me as a pleasingly progressive move. I have read that the very poor (favela residents) have been less involved in the protests for lack of leisure time and fear of unemployment, and certainly the oft-cited Datafolha poll supports such a claim: 71% of protestors in the first wave of  São Paulo protests having completed higher education. It would be an unlikely a favela cross-section.

However, the ethos of the protest has been of pure solidarity and often specifically with the many Brazilians living in poverty. CNN quoted one protestor saying, “The World Cup isn’t good for Brazil. It will bring tourists and money but this is not good for poor people.” Another young man’s sentiment was similar but perhaps more direct and copping to a lower personal rung on the economic ladder, “They are looking out for people outside the country, they aren’t looking for us, for the poor people.”

And it is no coincidence that the grievances being aired in the protests coincide directly with the petering out of the Morar Carioca and PAC programs that seemed to offer such hope and propelled Paes to a second term. 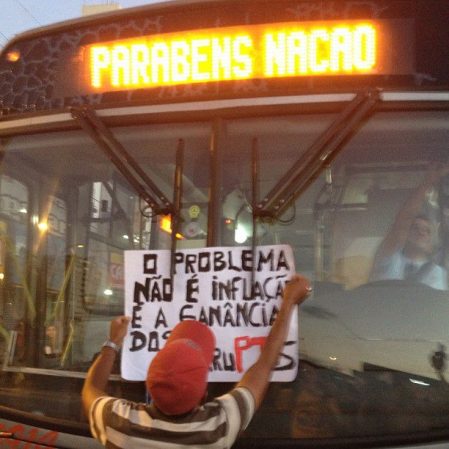 Poster: “The problem isn’t inflation, it’s the profit of the corrupt.” Bus LED: “Good for you, Nation” (Click through for more protest images)

And in all of the uproar, it appears at least Maré and Rocinha held their own localized protests, but predictably received much less air time. The limited press they did get resulted primarily from the tragic police retaliation resulting in deaths of 9 resident’s whom police referred to as “suspected drug traffickers” (Of course they were, right? You can tell by the way they got shot). As hard as the reports make it to establish a clear picture of events, two things appear certain: favela residents were emboldened by the solidarity shown in previous protests, and that the purpose of the protests themselves become more clear and more urgent as a result.

Another good use of Neimeyer architecture: Protestors demonstrate at Rocinha’s Passarela on Tuesday. (Click through for complete slideshow).

The official government reaction to the protests started tepid, and forgettable, as if the power structure was waiting for the pot to simmer down. President Dilma’s first reaction included, “Peaceful demonstrations are legitimate and part of democracy. It is natural for young people to demonstrate.” But then she cancelled her trip to Japan and we wondered if she was finally taking it seriously (She really ought to: a full 75% of Brazilians support the protests). And then Ms. Rousseff called for a national referendum to establish scope of political reforms including campaign finance and corruption, a move that, of course, this has been met with significant pushback from legislators who cite legal concerns (“leave the law making to the professionals,” meanwhile up to $43 billion in public funds vanish every year). As well, she has committed $22 billion (R$ 50 billion) to address concerns over public transit and announced that oil royalties (R$ 280 billion, $127 billion) would go to augment health care (75%) and education (25%). So far, the Brazilian congress has defeated the constitutional ammendment that known as PEC-37 a serious sticking point for corruption-savvy protestors, and is considering President Rousseff’s proposals. 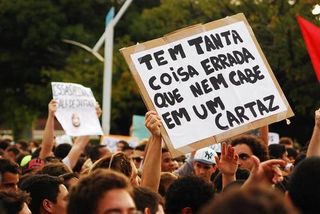 “There’s too much wrong to fit it all on one poster.” Click through for RioGringa Blog.

How serious the President and the Congress are about listening the voice of Brazil’s frustrated people remains to be seen. A few things are certain: The first is that life for Brazil’s favela residents and working class is not getting easier, and the causes of their struggles are coming to the fore; And, while for the time being the protests have abated somewhat, this is not over. Meanwhile, we’ll be watching to find out just how hard the políticos will work on behalf of the Brazil that moradores of favelas dream of and that all Brazilians can be proud to participate in. Until then: Vem pra rua!

2 thoughts on “Socio-Urban Integration and The Brazilian Uprising”