As I listened to a Youtube video of a Passinho battle, with it’s rough and heavy funke soundtrack, something perfectly appropriate happened. A middle-aged acquaintance remarked sarcastically from the other room, “Well that sounds educaaational.”  (It turns out, I had been learning a ton in the short sequence of these 3 minute youtube videos. But I’ll get to that). 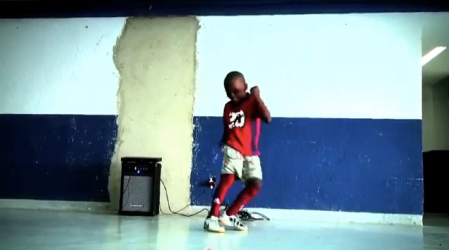 Scene from the new documentary “Batalha do Passinho” featuring the 9-year-old champion, Christian. Click through for video.

So, I ignored the sarcasm and took a moment to explain what it was and where it came from and how it seemed to me to be following the same favela-to-mainstream cultural narrative arch that samba once had (she’s somewhat familiar with samba from watching Dancing with the Stars, well, and from being alive), only so much more quickly because of youtube. “But at least samba doesn’t sound like you’re in the ghetto!” she responded. I thought it was really interesting that she immediately associated the sound with “ghetto.” I’m not sure if she was referring to the sound engineering or production quality, or the heavily syncopated rhythms, or the rapping vocal track, or what. Maybe all of that. But it was a pretty profound thing to say I guess, even if she meant it in derogatory sense. That the sound could be an auditory expression of it’s urban circumstances, so accutely and accurately, even to someone who knows so little about any of it, is pretty amazing by itself. 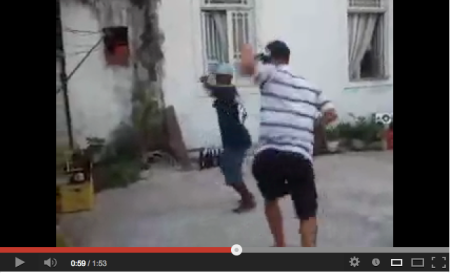 It is of course essential to remember that samba was once ghetto music too. It didn’t really catch on culturally until white, non-favela singers started playing it as well. For a long time it was associated with Afro-syncretic traditions, and blackness and favelas, and therefore was less acceptable to the mainstream public.

But what else is amazing is the the sheer exuberance expressed in the Passinho culture. I can’t help but think that much of this is related to the increased peace (growing pains and all) created by the favela invasions and the subsequent routing of the drug trade with it’s influence, even tyranny over so much of favela life in Rio.  As Julio Ludemir, organizer of the Vidigal Batalha do Passinho puts it, “These boys are destroying the logic of the drug trade, of all organized crime. The organized crime made people feel like prisoners in the favela, and not look beyond it. Now the favelas are getting globalized. …Through social media these boys are taking their dance to the world and bringing the world to their dance.” 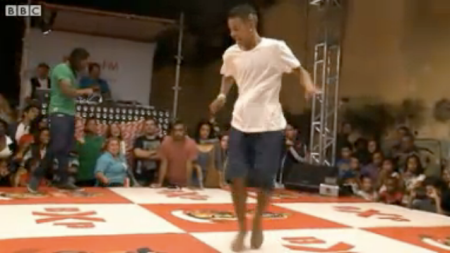 Pablinho, of Rocinha, Rio de Janeiro, competes in a Batalha do Passinho in neighboring Vidigal. Click through for video.

And it is becoming a massive cultural phenomenon, not just in Rio, but around the world. The dance with it’s fusion of steps from hip-hop, break, frevo, samba, and forró makes perfect sense of the informal world it arises from. These are dances typical to various areas of Brazil and parts of Brazilian pop culture, and they become swirled together almost like the sound of walking through someplace like Rocinha on any given Saturday night: forró dance in one area, funke somewhere else, hiphop everywhere you go, samba in the bars and clubs. It’s wonderful, and it’s bringing something to funke culture that was seriously lacking in my opinion: that native brazilian joy. That happiness, that sense of neighborliness, of alegria.

So much of funke takes itself so seriously and so much of it was so negative. But I have yet to see that aspect of Passinho. And that may go to explain it’s popularity as well. I mean, when Passinho translates pretty directly to the Xuxa show, you know it’s captured the positive aspects of the world that forms it, but more importantly you know it’s made it into the mainstream. And with any luck that positive side will keep growing, and Passistas will continue as cultural ambassadors for Brazil and Brazil’s favelas. 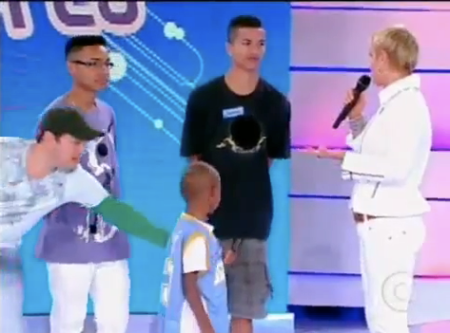 Rising stars of Passinho perform o the Xuxa show. Click through for video.