In 1995 and 1996 I lived in Sao Paulo, Brazil while doing fieldwork and research for my Masters of Architecture thesis. One of my research sites was a small favela called Sao Remo which borders one edge of the University of Sao Paulo (USP).

While out one day measuring and photographing public spaces in this favela, I met two young girls who became my close friends during my time in Sao Paulo. (My arms are around them in this photo.)

The girls became my friends and helpmates. They were funny and bright and I thought often about what their futures might hold. At the time, the main streets of Sao Remo looked like the photo below. 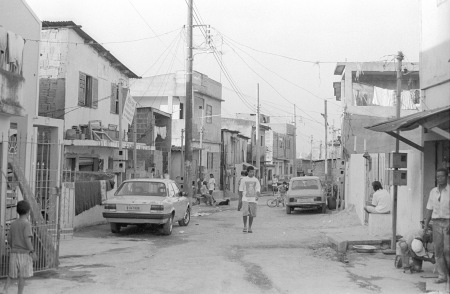 Houses were either CMU or wooden shacks, streets were dirt, cars were few, and there was a general feeling of “not much going on”. From what I understood, some of the residents worked at the university, but most were unemployed or underemployed.

Last month, I had an opportunity I had long been hoping for. I returned to Sao Remo in the hopes of locating my old friends, who I had not been in contact with for 17 years. I entered the favela through the old familiar gate in the university wall, and started asking people if they recognized the two young girls in the photograph I was carrying. The wonderful woman pictured below, Dona Cida, took on the project of reuniting me with my friends and didn’t give up until she had delivered me to older sister of one of the girls. 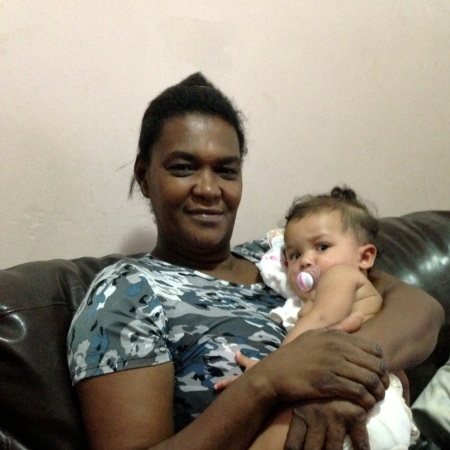 Dona Cida had lived in Sao Remo for 40 years. When I told her I had been there in 1996, she immediately began to list all the ways the favela had physically changed since then: the paved streets, multi-car garages to accommodate residents’ new cars, one- and two-story structures growing to three- and four-stories. As she described all this, she led me past street facades that were now entirely commercial, with multiple bar/restaurants, beauty salons, boutiques, and grocery stores. The place had so much more energy and life than when I had last visited.

I asked Dona Cida’s daughter what she thought of the changes. She expressed an unequivocally positive view of the benefits accrued through the incremental economic development of the neighborhood. Although my visit with her was brief, I came away with the impression that the physical and economic improvements I was seeing, combined with the extremely tight social network, made for a happy neighborhood.

I spent the next few hours while waiting for my friends at the home of my friend Marlene’s older sister. Rather than exchanging phone numbers and email addresses, she helped me “friend” the whole gang on Facebook. Finally I was taken to Marlene’s mother’s house to wait for her. She and my other dear friend, Rosilene, arrived one after the other. 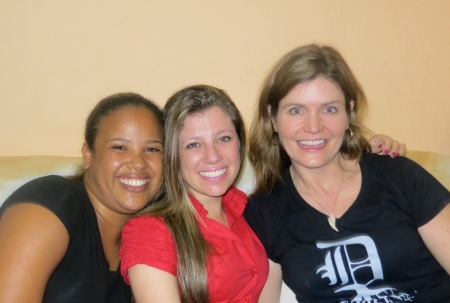 Both women are happy and healthy. Rosilene, on the left, has a beautiful 6 year old son. Marlene, in the middle, has gone to university, has a professional position, and is on her way to the US to study English. There is a lot written in the Brazilian press these days about the “new middle class” which has grown by about 42 million people in the last decade, according to the IDP. Sao Remo has become a more positive place to live and raise a family over the last 17 years, and so have many other favelas in Brazil. Though I’ve often feared it was, perhaps optimism about informal development isn’t a misuse of energy. Families in favelas doing better over time – it’s what we all hope to help happen through our work.

3 thoughts on “The Old Gang in the “New” Neighborhood”