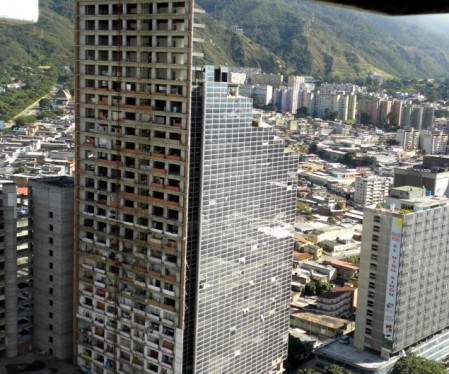 On January 28, The New Yorker published an article about Caracas under Hugo Chavez with the provocative title “Slumlord.” The author, journalist Jon Lee Anderson, has spent time with Chavez over the years. He describes the development of mutual respect and interdependence between Fidel Castro and Chavez at the very end of the 1990s, and Chavez’ decision, in 2005, that “socialism was the best way forward for the region.” Anderson goes on to state that “after decades of neglect, poverty, corruption, and social upheaval, Caracas has deteriorated beyond all measure.”

Anderson turns the focus of the article to Torre de David, the unfinished concrete highrise shell occupied by invasores in 2007.  According to Anderson, the initial occupiers were mostly homeless, but later allowed in other people from poor barrios who wanted to “leave the muddy hillsides for the city proper.” Currently, the “boss” of the tower is Alexander “El Nino” Daza. Some see the Torre as the source of much crime, while others insist there is very little crime in the building.

Silvia Soonets posted about Torre David when an exhibit about the tower by Urban Think-Tank (U-TT) won the Golden Lion prize for the best project of the Common Ground Exhibition at the 2012 Venice Architecture Biennale. (Alfredo Brillembourg of Urban-Think Tank is a relative of David Brillembourg, the developer of Torre de David.) The project’s website says, “Even before its opening, this installation has become highly controversial in the Venezuelan architectural community. Many are dismayed that the nation’s architectural accomplishments are “represented” by a never-completed and “ruined” work; others argue that the exhibit condones the Venezuelan government’s tacit and explicit support of illegal seizure and occupation of property. In fact, none of these positions reflects the true nature and purpose of the exhibit. It, and its creators, avoid taking political sides, arguing that Torre David represents not Venezuelan architecture but rather an experiment in informal/formal hybridity and a critical moment in the global phenomenon of informal living.” 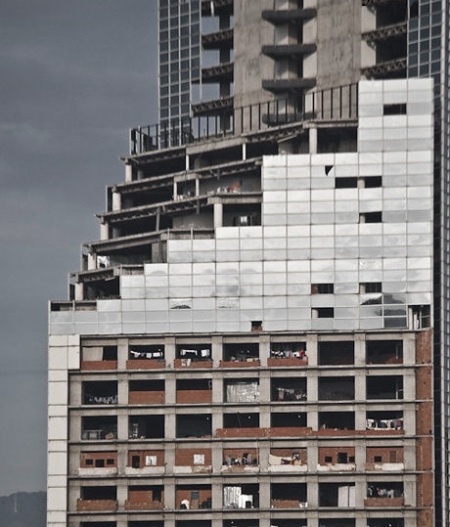 Leaving aside the issue of tenure, it seems that those who appreciate Torre David applaud the creation of social networks that aren’t typically established in residential high-rise buildings, the provision of self-managed services, and the mix of commercial and residential uses within the vertical organization. Opponents are justifiably concerned about the lack of sanitation, impediments to emergency services, the risk of falls, especially to children, and the inability of the elderly to get in and out.

How far can this “experiment in informal/formal hybridity” be taken? If Torre David were to be replicated as a new proposal, it would likely take the form of a vertical sites and services project, with residents permitted to infill as desired. Looking at it from a civil engineering perspective, is a high-rise the most efficient way to provide necessary structure and infrastructure to a maximum number of people? And does that efficiency justify the high development costs and the possibly detrimental effects on social support systems (as there’s no guarantee that Torre David’s social networks could be replicated)?

Although vertical development is typically touted as a way preserve urban green space, I wonder if the social networks that are so critical to the survival of those living in informal territories may still be better supported in a horizontal development, where foot traffic can get you where you need to go, where children and the elderly are less at risk, and where access to work requires neither a working elevator nor an 18-story stair climb.  Which is more important, our social support networks or health and life safety? When will we no longer have to choose?

One thought on “Vertical Sites and Services”