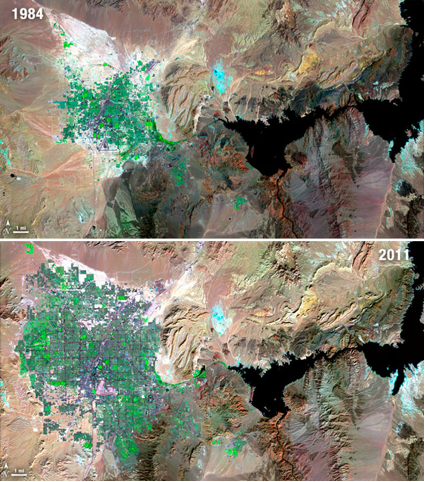 Over the years of the Landsat program, the desert city of Las Vegas has gone through a massive growth spurt. The outward expansion of the city over the last quarter of a century is shown here with two false-color Landsat 5 images (Aug. 3, 1984 and Nov. 2, 2011). The dark purple grid of city streets and the green of irrigated vegetation grow out in every direction into the surrounding desert. These images were created using reflected light from the shortwave infrared, near-infrared, and green portions of the electromagnetic spectrum.

Shlomo Angel, a visiting fellow at Lincoln Institute of Land Policy, has produced a guide to how cities have expanded over time, with his recent work on the Atlas of Urban Expansion. For example, he says, it is vital that cities acquire the rights-of-way for arterial roads that can carry public transport and trunk infrastructure and protect selected open spaces from encroachment in advance of the coming expansion. He urges local and national governments, civic institutions, international organizations and concerned citizens to make adequate preparations.

He is raising some concerns.  “Massive urbanization, accompanied by the rapid expansion of cities and metropolitan regions and the sprawling growth of megacities the world over, is one of the most important transformations of our planet. Much of this explosive growth has been unplanned. Cities in developing countries have been unprepared for absorbing the many millions of the rural poor that are still crowding into informal settlements. These cities are now scheduled to double their urban population in the next thirty years, and possibly triple the land area. And while in industrialized countries the great transformation into an urban society is largely completed, there are growing concerns about continuing low-density sprawl and its deleterious environmental consequences – the effects on carbon emissions, energy use, and the loss of prime agricultural lands.

Santiago, Chile ranks among the world’s fastest going cities. Chile is South America’s fifth largest economy with strong tourism and export markets. More than a third of Chile’s population lived in Santiago as of 2009.
Taken on Jan. 9, 1985 and Jan. 30, 2010, this pair of images from the Landsat 5 satellite illustrates the city’s steady growth. the images were made with infrared and visible light so that plant-covered land is red. bare or sparsely vegetated land is tan, and the city is dark silver. in the 25 years that elapsed between 1985 and 2010, the city expanded away from the Andes Mountains along spike-like lines, which are major roads.
Images and caption: NASA/USGS

According to his research, the world’s urban population is expected to increase from 3.5 billion in 2010 to 6.2 billion in 2050, and almost all of this growth is expected to take place in less-developed countries. Cities in developed countries will add only 160 million people to their populations during this period, while Cities in developing countries will need to absorb 15 times that number, or close to 2.6 billion people, thereby doubling their total urban population of 2.6 billion in 2010. Given the expected decline in urban densities, these cities are likely to more than triple their developed land areas by 2050.

Angel takes that history and applies it to what he believes will be the realistic needs for urban expansion in the future. Within his main recommendations in “Making Room for a Planet of Cities” published last year, we can list the following:

“Most people who desire to live in urban areas will already be in them by 2100, but by that time it will be too late to act,” Angel says. “If the land required for public works or public open spaces is not protected from encroachment before it is developed, it will be next to impossible to ensure the orderly development of cities to make them more efficient, more equitable, and more sustainable.”

At the prospect of Latin-American cities becoming mostly informal places, some countries are planning and implementing urban experiments, but there are many that are not taking planning as a valid discipline supporting good governance.

While most experts agree that cities and their regions should pro-actively acquire ROW’s and engage in other planning for the future, the assumption that spreading out is the answer to housing affordabilitycould be a ticket to savage urban sprawl. Cheaper peripheral housing (due primarily to land cost, which rises with development) is largely a function of the ability to externalize transportation (commute) costs. 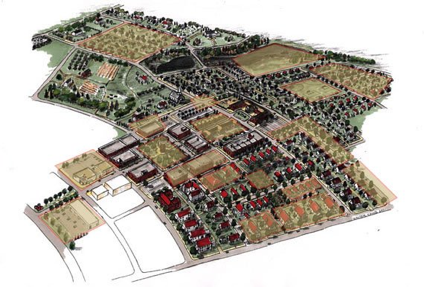 Some urban theories tie the form and land prices of cities to transportation, infrastructure provision, and mode choice. Thus planning future roads (or water works) in the periphery, and certainly to build them, is to invite development to those areas or maybe encroachment if construction  is delayed.

: less urban space per person moved (more land for ‘use’); greater reach for same commute time (reducing the reinforcing loop of formation of peripheral sub centers), and cheaper (increase ability to acquire housing). These techniques have proven efficient but required political consensus can be elusive in Latin-America and other developing countries. 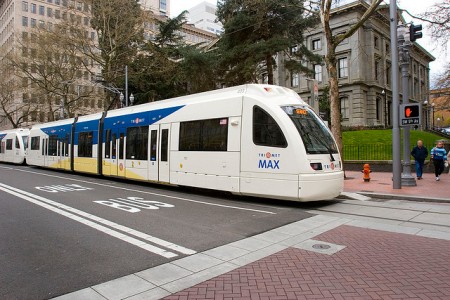 If we see contradiction in opposite attitudes towards expected growth; maybe it is because both reactions to spreading cities are to be involved in an adequate response. The cities will inevitably grow, but only smart mechanisms of governance (taxes, transport mixture of activities, technological development) will assure its sustainability.

To implement these SMART growth policies, and even to make corrections, governments must rely on the urban knowledge, which has often been crushed by economic and political power. Will the urgency get them to work together? Success stories have in common not only smart planners, but leaders that listen to them and employ them on wide fields of urban activities. Besides planning itself, wide urban-study fields have to be kept updated: baseline measures, implementation, follow up, adjusting and connecting to all levels of citizenship. This connection is last but not least, because the city is a product that must satisfy everyone.

Informality could become an exclusion mechanism blocking access of majorities to socio-economic opportunities or else, by channeling its immense resources, work towards the dream of sustainable cities.

One thought on “GROWTH OF INFORMALITY, ARE WE PREPARED?”