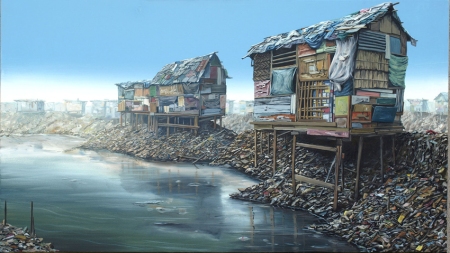 The title of this post is taken from a series of paintings by Jeff Gillette, a Southern-California-based mixed-media artist and painter. Gillette, in his artist’s statement, writes of his visits to several slums in Kolkata, Mumbai, and Delhi: “Aside from the seething humanity, the suffering, the unfairness and cruelty of the slum was a strange beauty. The cacophony of filthy debris rising from oceans of garbage comprises an architecture of poverty and necessity. What emerges is a living environment of aesthetic wonder, of spectacular variations of color, form, and texture.”

Gillette’s paintings display a high level of artistic control. Building materials, topography, and structural forms are clearly specified and arrayed in rhythmic compositions. The kaleidoscopic colors and textures are just bright enough to signal that the viewer is in a hyperrealistic environment, and to call attention to the consumer-waste origin of the building materials. Human inhabitants are absent (though human and Disney characters are sometimes included in order to make a visual pun on “squatting.”)

I wanted to focus on Gillette’s work here because it is a good reference point for discussing representations of urban informality and aestheticization of poverty, topics we frequently address here in Favelissues. As Gillette expressed to me, the visual and aesthetic are the primary content of his work, and his approach is basically objective. In that sense his images are the ultimate aestheticization of slums, as he is occupied with problems central to art and philosophy, not policy.

But Gillette’s paintings can stand in for a tendency in our own minds to let an image or the “skin” of an informal settlement push aside a fuller understanding of the complexity of urban informality. It’s so much easier to hold an image in our minds than a complex set of political, social, and economic relationships. In looking at these images it is clear how far an image can take us from not only the daily life of a slum but from an understanding of the political economy of urban informality.

Two aspects of the work are, for me, particularly striking. The title Slumscapes brings up issues related to naming and labeling informal settlements. The style and content of the work impairs one’s ability to name the subject matter anything other than “slum.” We can’t call it an informal settlement, as that carries connotations of economic interdependency, for which there are no markers. We can’t call it a squatter settlement, with its connotations of poor people’s political agency, for there are no people. The word “slum,” which occupies a deep place in the historical memory for English speakers, is unique in its ability to call up negative connotations about inhabitants (slum dwellers), not just their living conditions.

Gillette chooses not to include people in his paintings as a way of focusing our attention on that which he admires, the physical objects and settings. But for some viewers, the absence of inhabitants along with their laundry, furniture, and stored building materials will signify an abandoned city, reinforcing the idea that slums and informal settlements are only about constructed form. Yet in another sense, the exclusive attention to the materiality of post-consumer constructions and garbage-filled canals calls our full attention to environmental degradation which otherwise might not receive it.

In Ananya Roy’s essay addressing the “politics of representation“, she argues that there are different “genealogies of representation”, one which arises from an aesthetic  relationship with urban informality and another from a political one. Roy argues for a genealogy of representation that “views the city not as a unique ecology but as a mundane articulation of production and social reproduction; not as a magical precartographic realm of vernacular authenticity but as a mapping and unmapping of interests and power; not as a separation of First and Third Worlds but as the constant interpenetration of these geopolitical axes.” The challenge is to imagine what such a representation would actually contain, and how to create it. 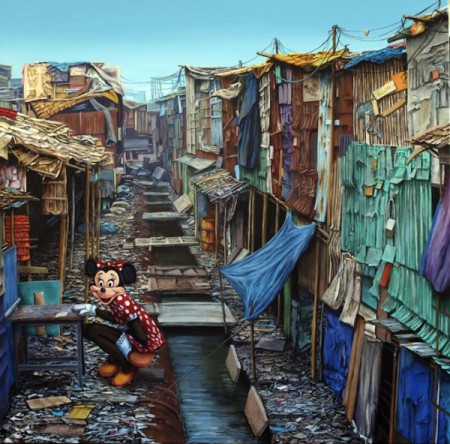