“Sport Mega-Events and the Crisis of Youth Exclusion” source: http://youthandsport.idebate.org/

Lines are being drawn over Rio de Janeiro’s controversial Pacifying Police Units; but are opinions more ideologically informed than they are based on empirical evidence?

Last week I attended a conference about youth and social exclusion in the context of sporting mega-events. Sport and play are strongly associated with children and youth; and as the organizer’s note, the Olympic Games and FIFA World Cup “were founded on the theory that by providing healthful, demilitarized spaces where the youth of the world could realize their potential, they would come to embody a new kind of non-nationalistic, peaceful breed of humanity.” The present-day reality of mega-events, particularly the Olympics and the FIFA World cup, ironically rely on exclusionary policies and police practices that disproportionately affect young people. The organizers and participants of the conference; a healthy mix of academics, activists, and youth advocates; explored this contradiction and asked “How can public policy makers, youth organizations and event organizers ensure that the arrival of these sports mega-events, which are almost universally heralded as economic and social opportunities for their host communities, do not isolate, exclude and target local underprivileged youth?”

One of the sessions addressed ‘security’ and young people in Rio de Janeiro as the city prepares for the 2014 FIFA Men’s World Cup followed by the Summer Olympic Games two years later. The speakers included a sociology professor from the State University of Rio de Janeiro (UERJ) and two community activists who worked with NGOs in different favelas in the city. The three presenters were congenial—they got along; they sat in a row together in the audience before presenting. They all seemed committed to social and economic justice, human rights, democratic participation and citizenship. They all denounced police corruption and abuse in Rio de Janeiro’s favelas and agreed that reducing inequality in the city ultimately rested with the state’s ability to guarantee the rights of all citizens. Despite the common ground, the three presenters had a major point of contention dividing them: The Pacifying Police Unit (Unidade de Policía Pacificadora, or UPP).

The UPP is a “community policing” division that “occupies” favelas after a period of military “invasion” and “pacification”. Its tactics signals a paradigm shift in Rio where the modus operandi for police in favelas was shoot ‘em up and get the hell out (over 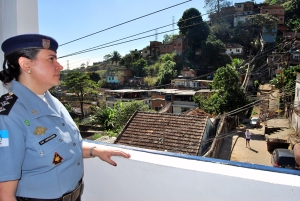 simplification and bias acknowledged). The UPP is meant to stay put in the favelas and form part of the communities they are policing as part of the new idealized integrated Rio de Janeiro (which I’ve alluded to in past posts).

The UERJ professor is currently conducting a study evaluating the results of the UPP in the so-called pacified favelas. Although he recognized the marginal effects of the UPP in the grand scheme of things (the UPP is currently occupying only a fraction of the city’s favela neighborhoods), the continued repression of individuals’ rights, and persistent widespread police corruption; he expressed general optimism about the direction of the UPP and stressed the positive effects that it has on the lives of the residents under the unit’s jurisdiction. In contrast, the two community activists seemed incredulous of reports touting the success of the new police paradigm and insisted on drawing focus to the continued disregard for favela residents’ human rights. When the sociologist cited data showing that residents of favelas under UPP jurisdiction had positive opinions about the new police force and that residents of “unpacified” favelas actually want UPP occupation, the community activists countered, saying that everyone they talk to either mistrusts or hates the police. When the academic claimed that the UPP brought security to the favelas and allowed residents to walk to and from work and children to play in the streets without fear of a shoot-out (either between rival gangs or the police and gang members), the community activists contested with anecdotes of continued police brutality and insisted that the police ‘rule’ the favelas with the same tactics as the drug lords: intimidation and violence.

And so went the debate, tit for tat. The audience, as well as the event organizers, voiced opinions closer aligned with the activists, and called for ‘alternative methods’ of achieving security in the city. The academic in turn seemed exasperated that nobody was willing to acknowledge any achievement of the state because it meant an implicit endorsement of police tactics.

I spoke with the sociologist above after the debate, and he told me that his name “used to be mud” to Rio’s police commanders because of his publically scathing reports on human rights abuses and extrajudicial killings. Since he started working with the government and the UPP, he bemoaned, he feels attacked from both the left and the right.

I found this debate interesting, albeit frustrating, because the academic left in Brazil is often so radical and critical of the status quo that it’s a rarity to find a university professor actually defending the state, much less the police. In my experience following Brazilian research, progressive academics often speak in-step with leftist political movements and community organizations. However, I am repeatedly seeing leftist academics (sociologists, geographers and anthropologists) cautiously (or in some cases eagerly) embracing the UPP and the current favela-integration paradigm while the majority of well-known favela-based political organizations (and oddly enough many foreign researchers) adopt a highly critical platform or reject it all together.

In my next post, I will explore the problem of framework when researching Rio’s favelas, the UPP, the integration paradigm and urban violence. I’ll address positionality and perspective, academic objectivity and moral compass. Because most researchers, architects/planners and ‘development specialists’ that I know who work in Rio’s favelas (and poor urban settlements everywhere for that matter) want to affect change, my goal is to map out the very real political choices we make that inform our work and our research.

2 thoughts on “Questions of perspective”