Since most of our contributions in our delicious favelissues blog deal with slum or informal settlements I wanted to share with you today a brief analysis of the history and diversity of how we define “slums”. A couple of months ago, I had the opportunity to have Alain Gilbert as one of the jury’s of my PhD dissertation and had to defend my use of the word “slum” throughout my manuscript – bear in mind that my PhD was on slum policies so the word “slum” was very common. Alain has been one of the academics leading the “slum” definition debate and argues that academics and practitioners should avoid defining “slums” as slums because of the negative connotation this term is related to (Tucker Landesman mentions Alain’s position on his previous post)[2]. I have my own opinion about this, and will share it at the end of this post, but will first start with a brief history of the idea and definition of “slums”.

A brief history of slum definition

Slums, favelas, bidonvilles, shantytowns, villas miseria, aashwa’i are all different names that describe one of the most common human settlements in developing cities: informal settlements. But what exactly are slums or informal settlements? The first known definition in the English language of the word slum appeared in the Vocabulary of Flash Language in 1812, where it is given as a synonym with “racket” or “criminal trade” (Mike Davis, 2006). At this time slum settlements were associated with urban areas in which the poor lived under precarious sanitary conditions, an idea that is still very accurate to describe today’s slums, but also referred to areas that concentrated a number of criminal activities. The stigmatization of slums as areas housing criminal populations persisted; in 1894, the US Department of Labor, in its survey entitled The Slums of Great Cities, defined slums as “areas of dirty back streets especially when inhabited by a squalid and criminal population” Davis (2006). Today the Merriam-Webster Dictionary defines slums as “a densely populated usually urban area marked by crowding, dirty run-down housing, poverty, and social disorganization” (Webster, 2011). As you can see, this last definition evidences how–despite having moved away from the criminal perception of slums–there are still a number of behavioral characteristics associated with them (social disorganization).

While slums have been decorating urban areas for quite some time, it was only in 2003, with the publication of the UN-Habitat Global Report on Human Settlements, entitled The Challenge of Slums, that a more precise definition of the word slum was given. The lack of an agreed–upon definition, as explained in UN-Habitat (2003), resulted in a lack of monitoring and reporting of slums conditions at the local and national level. Hoping to have a more universal and objective definition, an operational definition of slums, that accounted for the heterogeneity of informal settlements, was recommended by UN-Habitat in 2002. A slum was defined as an area that combines the following characteristics: inadequate access to water, inadequate access to sanitation and other infrastructure, poor structural quality in housing, overcrowding and insecure residential status. A slum household, as defined by the United Nations, is a group of individuals living under the same roof and lacking one or more of the following conditions: access to improved water, access to improved sanitation, sufficient living area, structural quality and durability of housing and security of tenure (UN-Habitat, 2009). The first four criteria correspond to physical expressions of slums conditions (i.e. access to basic services, overcrowding and housing structure) however, the fifth, is related to the law or to the application of the law, which is more difficult to measure. A more detailed description of these indicators and their thresholds can be found in the following table.

Although the UN-Habitat definition identifies the most significant aspects of living conditions, it is, as in the case of most generalizations, incompatible with many of the local or national definitions of informal settlements. For instance, a household that complies with the UN definition of access to improved water could still be considered a slum by local authorities because it does not have a piped–water connection inside the dwelling. In Egypt, slums are known as aashwa’i, which literally means “random” and correspond to deteriorated zones with little or no access to basic services (UN-habitat, 2003). In India three slum definitions were retained for the 2001 census: all specific areas in a town or city notified as ‘slum’ by state or local government, all areas recognized as ‘slum’ by the state or local government, housing and slum boars, which may not have been formally notified as slum under any act; and a compact area of at least 300 population or about 60-70 households that live in precarious constructions and overpopulated dwellings, in unhealthy environments and have bad access to infrastructures (Government of India, 2001).

While the UN definition of “slums” was certainly important, in reality, slums are delimited along with national, regional or local definitions of minimum living standards, national laws and urban planning. For instance, zoning, construction and land regulations–which are generally defined locally–delimit what belongs to the planned city and what does not. In some occasions housing solutions located in zones, which are considered industrial according to Master Plans, could still be considered illegal or informal even when complying with construction standards. In the same way, at the national level, private property laws define the rights and duties accorded to private property and in some cases the available forms to enforce them. The following table presents some examples of the issues covered in the definition of slum in different cities, which reveal very different visions of slums. We can see how cities like Abidjan and Beirut do not have any definition of slums, while cities like Bangkok delimit their definition of slum using health, crowding, environmental and crime indicators. 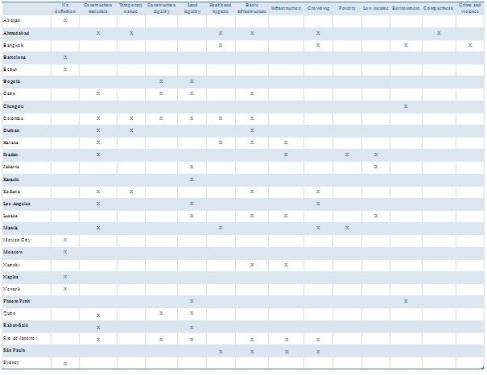 My opinion on calling a “slum” a slum

I have studied “slums” and “slum” policies for the past four years and have – so far- not reached a – personal- consensus on how I think about slums or about the importance of calling a “slum” a slum. On the one side, I believe, being a Colombian, that we can call thing’s by their name. In my country, many people call their black or blonde friends “negris” or “mona” and it is generally seen, not as a racist or discriminative action, but as a friendly way of describing one another. This argument is based therefore on the idea that the rest of people think like myself and do not associate a criminal idea to the word slum. On the other side, I am aware that names can sometimes have different meanings for different people and can and have been used as a mean to signal discriminative behavior (i.e. remember the Jews holocaust). Therefore, it is important to be careful with how we name our “favelas” making sure that we are not naming at the same time other “issues”.

What do you think about calling “slums” slums? Does the national definition of slums of  your country remain corresponds to to society’s definition and its vision? Do you think that in the cities where you work or live there still is a “criminalization” of the word slum?

[1] Nonetheless, with due deference to Gilbert, leading critical researchers continue to study slums as slums, if only because the category is ubiquitous in policy, the media and every-day conversation. It may be that researchers are powerless to “control” the conceptualization of slum because its origins and reproduction lies well beyond the reach of academia. Whether or not researchers validate or challenge slum-as-category, it will be treated as such by just about everyone else.