“Observers of the contemporary city have described the late capitalist urban condition as characterized by a trend toward the aesthetization, where the primacy of the visual and the centrality of the image have reduced the city to a landscape of visual consumption, an object to be gazed upon, or a spectacle. Current urban design practices are said to nourish this appeal or the embellishment of the material world by giving precedence of the façade to the creation of urbane disguises, thereby reducing the effect of much architecture to two dimensions.”[1]

In the previous post, we discussed the role of image, looking at three particular examples of representations on urban informality. In this post, we will explore some of the implications when placing too much attention solely on representation. As Namrata well pointed out in her previous post: In Retrospect, solely focusing on physical transformations, and viewing informal settlements as purely built form can lead to an aesthetization of the area, turning informal settlements into simple representations drawn up by the “bourgeois gaze.”[2] (Roy, Ananya, “Transnational Trespassing,” pp.302)

By looking at a settlement primarily as built form implies that “upgrading” would entail a “package of environmental reforms,” and that these upgrading should be based on aesthetics that are interpretations of poverty and informality by professionals; failing to take into account the socioeconomic structure of the slums. Ananya Roy argues that one element of this aesthetic is the emphasis on architecture and on the physical expression of the settlements. The limitations are basically the focus of the built environment and physical amenities over people’s capacity or livelihoods, wages and political capacities.

“To present the stories as embodied in aesthetic structures is to imagine poverty or the informal sector as a pre-capitalist domain, free of material corruptions […] The material reality of squatting is, of course, that it is very much about territorial exclusions, about the lack of space, about the spatial ties of livelihood that bind squatters to the most competitive terrains of the city.” [3]

As such, aesthetization only addresses the visible and is based on the representation of the squatter settlements. It is enhancing the rendering of poverty as ugly in the bourgeois gaze – this implying that the solution one of beautification. In his Project Manufactured Sites, Teddy Cruz is challenging this as he is taking inspiration from the shantytown’s construction methods and materials. Nevertheless, by using the same recycled materials already present in the squatter settlement, garage doors, rubber tires, etc, he is reflecting is romanticizing on the temporal, “nomadic” and fragile aspect of these informal settlements. One might ask oneself is one can truly achieve equity and dignity with rubber tires. 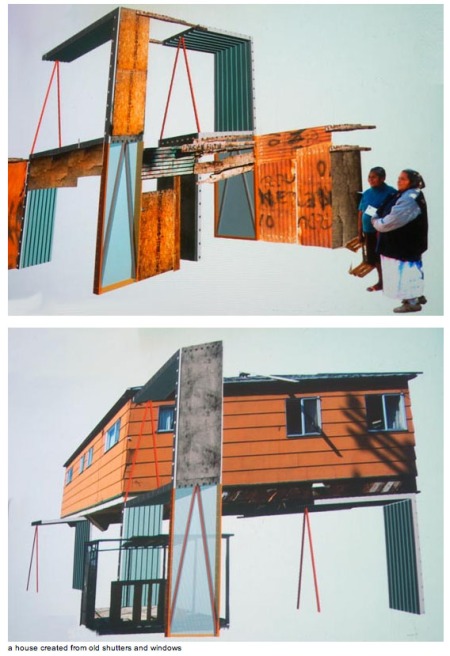 One cannot neglect the power of perception, identity, and transformation that come along with an emphasis on image and representation. The image could greatly contribute to increasing the self-esteem, identity, and empowerment of a community.

Nevertheless, not to fall under the danger of aestheticizing poverty, simply responding to beautification schemes catering to the tourist and ‘bourgeois gaze,’ we need to constantly ask ourselves how can architects address the favela without dismissing it as a “slum” and without aestheticizing poverty and transforming it to a theme park?

In 2003 Habitat for Humanity created the “Global Village and Discovery Center”, a theme park aiming to display the “poor and dilapidated housing” of Third World countries, giving Americans the chance to personally experience conditions of poverty in the developing world. Located on a site next to the organization’s headquarter in Americus Georgia, the “slum theme park” themes poverty, exploiting the image of poverty without addressing its root causes. As such, the park confuses squatting practices with “slums”, dismissing the socioeconomic and cultural factors by which the poor overcome poverty. The emphasis on the final product of a house, Habitat’s for Humanity neglects to acknowledge the housing processes and policies and the complexity of poverty and informality, which many times is the only means of survival, used by individuals and communities to achieve mobility and claim rights and recognition. 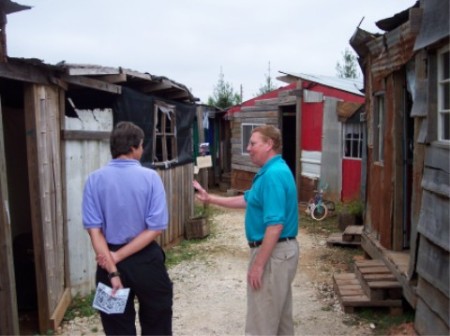 To read more on GLOBAL VILLAGE, check out this article

Finally, I cannot resist but to share a link to a Stephen Colbert segment of the Daily Show

[2] “The establishment of an aesthetic and aestheticized (rather than political) relationship between the viewer and the viewed, between professional and city, between first and third worlds- bourgeois gaze.” Roy, Ananya,“Transnational Trespassing: the geopolitics of urban informality,” in Ananya Roy and Nezar Al-Sayyad, ed., Urban Informality, Lexington Books, Lanham, 2004 pp.302