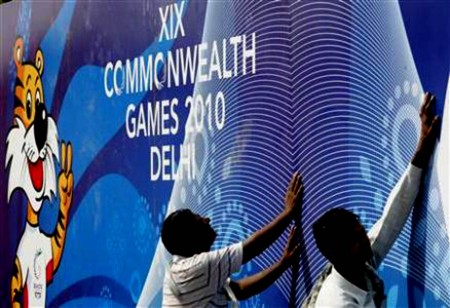 The winning bid for the XIX Commonwealth Games quoted in 2003 was Rs. 1,899 crore (420 mi USD) for the successful planning and execution of the games. Over the next seven years, during the actual planning and execution of the required projects, the overall expenses went up to an official budget of Rs. 10,000 crore (2.2 bi USD) and an unofficial amount of Rs. 30,000 crore as estimated by individual experts (“Whose wealth? Whose commons?”, 2010b)[i]. These expenses were very naturally borne by the people of Delhi and particularly its urban poor through price hikes in daily food supplies, shelter and other necessary services (Pandit, 2010a)[ii]. The “spectacular spending” of Rs. 30,000 crore (as conceded by Urban Development minister, Jaipal Reddy in an interview for the UK Guardian) is almost the same amount as the total budget of the Government’s National Rural Employment Guarantee Act (Bidwai, 2010)[iii], which is currently under the radar of budget cuts.

Mega-events are invited to host cities as important economic generators, but most often leave their nations with long-lasting negative externalities laying deeper foundations of poverty, inequality and social injustice for several years ahead. Even though the precedents of most such events tell us stories of dispossession and trauma, the comparative study of such events is usually premised on the final presentation, the festivities and the overarching global optimism – how this event will be the best the world has ever seen! Tainted by this naïve optimism the CWG 2010 launched its very own mascot, a friendly tiger, installed by the OC (Organization Committee) to announce the arrival of the games and invite people to “Come Out and Play”[iv]. The mascot, “Shera”[v] as he was called, was characterized as a sportive, “modern Indian citizen” who is crafted to embody “the values the nation is proud of: majesty, power, charisma, intelligence and grace”. At the same time, He (the tiger) is also, a “reminder of the fragile environment” he lives in, and that it is “our responsibility to protect his ecosystem” (XIX CWG, 2011)[vi].

In this narrative, there is a stark callousness by which the intentions of the State are framed, forwarding an optimism for the games that overlooks the needs and desperation of those rendered unseen. Here the poor are treated as ‘disposable assets’ whose only “responsibility” is to maintain and protect the “ecosystem” for its “modern Indians”. The narrative of the mascot maybe an insignificant detail amidst a larger story of dispossession and injustice, but it provides a useful tool to study and analyze the various beautification projects carried out by the state to design the fragile environment for its invited guests and exclusive citizens. The construction of such informally planned and executed “ecosystems” is again a reminder of the India Poised campaign (2007), which contrasted two Indias, one: of the modern, rising, and developing, middle and upper classes in India, and the other: the poor, backward and obstinate India.

At the vortex of evictions, controversies, corruption and scams, the gates to the “spellbinding” mega-event were opened. The skies above New Delhi looked bright, engulfed by an aurora of fireworks, magnificent display of laser lights, music and entertainment as the city entered its first day of the games on October 3, 2010. The enthusiasm and sportive environment, with occasional ‘national heroes’ winning medals and recognition on the world stage continued until October 14, 2010. The closing ceremony was marked by a medley of culture, diversity and national pride. As seen from afar, over the horizon of stadium walls, the aurora revealed its glow – a display of fireworks, magnificent laser shows, the music and entertainment – to yet another audience of recently evicted homeless families huddled together around a small dying fire, watching the lights and colors fade into the cold winter night.

Commonwealth Games 2010, a display of spellbinding colours and technology at the Closing Ceremony, New Delhi, India.

Urban development as orchestrated within the neoliberal paradigm most often exhibits extreme social costs borne by its urban poor. Moreover, urban development as executed in New Delhi presented an unprecedented and almost ‘spectacular’ nature of coercion and hypocrisy laying grounds for permanent conditions of ‘transience’ for its urban poor. Here the idea of ‘beautification’ meant many things. Beautification projects as budgeted in the initial bid in 2003, showed an expense of Rs. 7.5 crore (75 million) but after completion not even a single project was less than Rs. 7.5 crore (Housing and Land Rights Network [HLRN], 2010a)[vii]. In August 2009, NDMC (New Delhi Municipal Corporation) announced plans to plant 10 lakh (1 million) saplings at a cost of Rs. 23.2 crore (0.23 billion) to add color to the Games venue and its neighboring areas (Pandit 2010a)[viii]. Within the same climate, on December 22, 2009, the Municipal Corporation of Delhi demolished a night shelter in Delhi at the Pusa roundabout near Rachna Golchakar rendering up to 250 persons shelterless on the streets during the long, cold winter nights. The shelter was constructed by the Department of Revenue, Government of National Capital Territory of Delhi (one of the Key Stakeholders of the CWG 2010), with the help of the NGO (Non-Governmental Organization) Prerna. However, MCD officials claimed it as illegal and executed violent evictions, flattening the land for a future grass cover for the Commonwealth Games (HLNR, 2010a).

The Games village built close to the banks of the River Yamuna, developed by Emaar MGF (one of India’s leading real estate agencies) was another site of controversies. The village was designed as an enclave of high-end condominiums, plush green landscapes, walking promenades, pools, fountains and other fantastic luxuries, to cater to the needs of New Delhi’s expanding leisure class. The initial cost for the development of the games village was an exorbitant Rs. 1038 crore (10.3 billion) that was later supplemented with an additional Rs. 700 crore (7 billion) by the DDA to bailout Emaar in May 2009 ensuring the steady completion of the project (Pandit, 2010a). In 2003, following a set of Public Interest Litigations (PILs) the Delhi High Court sanctioned the eviction and clearance of the Yamuna Pushta JJ[ix] (Jhuggi Jhompri) Clusters that housed approximately 300,000 residents (40,000 households) along the banks of the Yamuna River (Bharucha, 2006)[x]. Pledging allegiance to environmental concerns under the “Clean Delhi-Green Delhi” slogan the city was a silent witness to these atrocities (Dupont, 2008, p. 81)[xi]. The Hazard Center conducted studies in the river and reported that “the total discharge from the 3,00,000 residents of Yamuna Pushta JJ cluster accounted only for 0.33 percent of the total sewage released into the river” (ibid, p.).

Construction workers at the beautification sites around the Jawaharlal Nehru Stadium in New Delhi, before the games. Source: http://www.thehindu.com/news/national/article587866.ece

Concurrently, Chief Minister Sheila Dikshit (in June 2007) announced the proposal for an eight lane express highway planned to relieve traffic and congestion in and around the Yamuna Pushta area to better connect East Delhi to other parts of the city. As part of this infrastructure project, the river was both cleaned and purified; its banks were extended as promenades and walkways for the bourgeois urban dwellers of East Delhi, presenting “the new face of the river” at the opening of the commonwealth games (“Yamuna Pushta gets a new express highway”, 2007). Baviskar[xii] (2002) points out that “bourgeois environmentalism” as an ideology is increasingly shaping the urban landscapes in contemporary India, and Yamuna Pushta amongst other CWG related evictions are just a few such cases where the urban vision for the future city is driven by a minority of elite classes and the majority of its poor are overlooked as “collateral damage”.

"View Cutters" installed along the road side to shroud all undone areas around the Games venues and maintain a sense of continuity of the spectacle.

Even with the spectacular nature of urbanism seen in New Delhi where the speed of planning and construction of the city as a stage moved faster as the event came closer, there were several projects left incomplete. To shroud these areas of “unplanned” environments the DDA developed a new urban apparatus called “view cutters” (as seen above) that would help hide the incomplete realities of the CWG stage. These view cutters were designed as exhibition boards of varied sizes displaying an enthusiasm for the games with sportive slogans and inspiring quotes enacted by the CWG mascot. The boards also displayed a collage of ‘trophies’ owned by the State – ancient heritage monuments, contemporary architecture and priced destinations of tradition and scenic beauty – to its keen international tourists. However, these boards were not billboards projecting images, and advertizing the events over long distances, they were boards often 10-20 feet high placed at ground level hiding heaps of rubble, open drains and most importantly the non-evicted poor! (see below). The view cutters were a new apparatus used to shroud and conceal the dirty and gritty parts of metropolitan Delhi from its foreign visitors (Ghosh, 2010)[xiii] as well as maintain the continuity of the mirage for a ‘fragile yet fantastic environment’. At places where the screens stopped short or the rubble seeped through, the shoddy realities of the city exposed itself to the spectacle. In some neighborhoods, jhuggi dwellers uprooted these temporary screens using them as attractive roofing material to weatherproof their fragile homes (ibid, 2010); adding yet another dimension to the spectacular urbanism of Delhi in 2010.

[i] Housing and Land Rights Network. (2010b, May 13). Whose wealth? Whose commons? New Delhi, India: South Asia office. Retrieved from http://www.hic-sarp.org/documents/Whose%20Wealth_Whose%20Commons.pdf

[ii] Pandit, A. (2010a, May 14). Commonwealth Games: Spectacular spending. Times of India. Retrieved from http://timesofindia.indiatimes.com/articleshow/5928487.cms

[iv] “Come Out and Play” was the XIX Commonwealth Games slogan widely advertised.

[v] Shera translated as tiger in Hindi is the XIX CWG Mascot.

[viii] Pandit, A. (2010a, May 14). Commonwealth Games: Spectacular spending. Times of India. Retrieved from http://timesofindia.indiatimes.com/articleshow/5928487.cms

[ix] Jhuggi Jhompri Clussters: are clusters of informal dwellings (jhuggis) that are used for residential purposes and are not in conformity with the landuse of Delhi Master Plan.

One thought on “The Games and Beyond—Visions and Compromises: PART 2”