Urban and rural developments in India have heavily impacted the lives of the poor by facilitating economic growth and global competition, and in the bargain producing large populations of displaced families and persons. The lack of services, infrastructure and concern presented to the displaced people, by private and public institutions have ousted these communities to live the lives of refugees within the purview of the ‘nation state’. Impacted by conditions of social and physical degradation they are forced to take up migratory lifestyles, subject to the availability of economic opportunities as “footloose labor”[i] in seasonal and temporary industries. New Delhi—during the development phase of the 2010 Commonwealth Games held in India—is one such example of a stark reality of urban evictions, displacements and state led informal policies of criminalizing urban poverty within the boundaries of the city. These ‘stories’ will illustrate not only the temporary nature of housing in the city but also probe the overarching narrative of “spectacular urbanism” that frames urban development agendas in the city and at a national level.

In my first post, I introduced my earlier work and future interests documenting and understanding the vast landscape of internally displaced people and families in India. While tracing some of the stories of interstate and intrastate migrants, caught up within a cyclical web of intergenerational poverty, I began conceptualizing a life of indefinite temporality as “transient space”. This is an idea I will keep coming back to in most of my future posts related to the broader theme of developmental displacements and migrations. ‘Transient space’ is a conceptual framework that is deployed to understand the cyclical and persistent nature of poverty ‘produced’ at a national scale. Informality is a product of neoliberal ‘urban reforms’ (Roy[ii], 2003, p. 94; AlSayyad[iii], 2004, p. 26) producing populations of people entering into the informal labor and housing markets. The simultaneous production of informalization (i.e. displacements in this context) and a subsequent series of evictions and violence exercised on the urban poor illustrate this nature of poverty as ‘transient’.

The site of the Commonwealth Games in Delhi is a terrain where these processes of dispossession and displacement can be explored through the most spectacular performances of urban development. Here, beautification projects were seen as mechanism to homogenize the spectacle with the city, initiating large-scale evictions, razing homeless shelters and policing streets, infrastructure and ‘private’ property weeks before the opening of the games. Evictions and displacements, in Delhi, were more an incremental and policy specific condition where different sites of “informality” were treated with different policies not always under the pretext of the games. Stories from Delhi thus cover this nature of informal planning propagated through mechanisms of ‘Privatization’. It is within such temporary and informal planning practices that “transient spaces” originate and thrive, as new ways of living.

The Spectacle City of New Delhi

The commonwealth games were first declared to be held in New Delhi, India, in November 2003 at the CWG federation general assembly in Montengo Bay, Jamaica. Besides several other commitments made by India in the winning bid the most coveted one was – gifting USD 100,000 to each participating country along with flight tickets for all participating players and athletes in the event. In a climate of competing global cities the successes and spectacular nature of events to be staged at the XIX Commonwealth Games became an important urban vision for the country and the city, to showcase a “world class” presence to its global audience. The announcement of the Games was thereafter marked with tremendous jubilation; work towards developing a new image for the nation thus began.

Since and even before the brutal period of the Indian Emergency, Delhi has been following a long lineage of evictions and demolitions reshaping the urban landscape on the premise of “relocation and redevelopment” culminating at the games of 2010 and after. “Between 1990 and 2003, the DDA demolished 51,461 houses under the pretext of “slum clearance” schemes. From 2004 to 2007 alone the city saw the evictions of 45,000 houses” (Bhan[iv], 2009, Dupont[v], 2008, p. 79) and since 2007 until a few weeks before the Games, people were still being handed eviction notices. 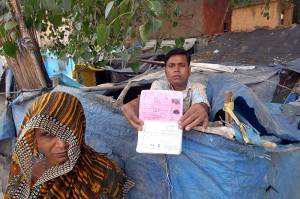 Family evicted just before the Games. "Manoj Kumar has a ration card, like many others at the Arjan Das Camp slum. Nevertheless, this family was evicted." source: Outlook India http://www.outlookindia.com/article.aspx?267762

The Commonwealth Games were announced at the tail end of the Bharatiya Janta Party’s  (BJP, one of the two major political parties in India, the other being the Indian National Congress, INC) five-year term (1998-2004) under the leadership of Prime Minister Vajpayee. The BJP Government embraced this opportunity to further their Machiavellian  campaign “India Shinning” widely publicizing the “new image” for the nation. “Hailing the successes of the Indian economy and featuring happy faces of contented and well-fed middle-class Indians” (Zora & Woreck[vi], 2004) they continued the process of achieving a “slum-free” city. In the 2004 elections, the baton was passed to the INC (Indian National Congress Party) under the leadership of Prime Minister Manmohan Singh, who continued these legacies of urban renewal. In 2007, the Times of India – India’s leading newspaper – launched its very own national campaign titled “India Poised” advancing the enthusiasm established by the BJP in 2004.

India Shining posters and hoardings displayed all over the city, with the ironic realities of the city as a backdrop. Source: http://www.frontlineonnet.com/fl2506/stories/

The production of a new-fashioned imagination of an everyday life catalyzed by excessive economic growth in the metropolitan regions of India lead to the settling in of a new affluent middle class, as part of a different India  that was carefully crafted for global consumption. The fantastic bubble of global India ruptured every time it encountered the poor, hungry and deprived reality of its millions being evicted and displaced as we speak. It is at the blurring of these realities where the condition of transience resides.

[i] “Footloose” labor a term defined Jan Breman (1996), in an extensive anthropological study grounded in India. “Beginning his local-level research in two villages in south Gujarat, the author discusses the mobilization of casual labour, which is hired and fired according to the need of the moment, and transferred for the duration of the job to destinations far away from the home area.”