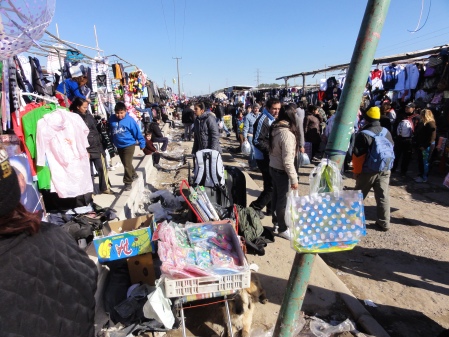 La Salada at 9 on a Sunday morning (J. Renteria)

La Salada, whose 20 hectares are lined along the south of the Rio Matanza in Buenos Aires, claims to be the largest informal market in Latin America. Given the thoroughness of pieces like this one, I thought I would instead share my personal experience with La Salada in hopes of providing both a more textured understanding of its context and insight on how it is perceived by some.

At the recommendation of a Buenos Aires-based architect, I decided to visit La Salada, located south of the Rio Matanza, just outside of the city of Buenos Aires’ boundaries and a part of the generally impoverished region of the South, which is largely characterized by poor infrastructure and few social service amenities.

Those less interested in La Salada as subject, knowing it only as an unsafe, chaotic place, repeatedly told me I should not go. I justified my insistence in going by assuming that it could not be terribly bad. Hundreds of thousands, from all of over the country and outside of it, bus in regularly to shop at this place, I thought. Tens of millions of dollars are generated from sales on a monthly basis! What is there to fear?

By the day of the trip, I had recruited a hostel companion to accompany me, thus somewhat assuaging the apprehension I was feeling about the trip at that point. When we jumped onto the bus to get to our destination, I let the bus driver know where we were headed and asked if he could give us a heads up as our stop neared. “Sure, it’s the last stop,” he said and, like many others before, asked if I knew where I was going. “Yes, I do know.” He shrugged and on we went.

About an hour and a half later, and after the dense city became vacant lots, dilapidated factories, and high-rising, sparse apartment buildings, we began crossing the Rio Matanza, which to me was an indicator of our close proximity to La Salada. As we crossed the river, the bus driver pointed to his right, where a dense massing of what appeared to be mangled shacks stood in the distance. “That, there, is La Salada, you see it?” asked the bus driver. “Yes, I see it, it looks like a short walk from here,” I said. “Sure it does, but you won’t be walking it. Instead, you’ll be taking one of the buses that will take you in from the next stop, where I’ll be dropping you off. You don’t want to walk that.” My response? “Mmm, okay.”

Coming through the modest bus station, were several buses, seemingly retired from a life working public transit routes and which had worn, cracked tires and missing seats – “truchas” or bootleg is how one vendor described them. All went to La Salada. We jumped onto one for a pricey 2 pesos or 46 US cents. As the bus made its way over unpaved, muddy streets and through the villa (what Argentines call their “favelas”) that was between us and the market, modest homes and abandoned shopping carts and toilets came into view. The sight, needless to say, was bleak, and, yet, optimistic, with bright, blue skies in the background.

We eventually pulled into La Salada, our view from the bus looking much like this.  We had arrived on an early Sunday morning, but not early enough for La Salada, which, on the weekends has been running since the late hours of the night before and goes on until vendors choose to close shop the following day.

As we hopped off the bus, we could more clearly see the “mangled shacks” we had seen from a distance. It turned out they were vendors’ stands, pushed up against each other, no bigger than 4 feet wide and 4 feet deep, and teetering on the edge of the river. Once we walked through one of the “entryways,” my companion and I ended up in a serpentine-like walkway that narrowly weaved its way around the rickety stands. Much of the same was being sold – Gap sweatshirt and pant knock-offs, baseball caps embroidered with an array of logos, and the paisley-printed stockings that could be found on young ladies all over town, amongst other things.

We moved onto the main “boulevard” along which the bus had entered and from where the end of the market could not be seen. We continued along this stretch where much of the same sight repeated itself. Smoke from grills and the smell of sausages permeated the air at some points. Appealing as they were, our minds told us to think twice. Music blasted and we became increasingly exhausted by all the stimuli. We had little energy to be at all concerned for our safety, a worry that seemed less and less relevant as we marched along the rows of vendors alongside other shoppers. At this point, we decided to head out and into the city, with a pathetic battle story to share, given what turned out to be a harmless visit to La Salada despite the concerns expressed. Perhaps we were lucky. Nevertheless, the claim that we had been there seemed to arouse the interests of some, who “could not believe it.”

It was only afterward, when I spoke with Paola Salaberri, an architect and professor at the Universidad de Buenos Aires, who has done extensive research on La Salada and on what she and colleagues call “paraformal,”, that I realized that I had only seen and experienced a small bit of the place. More specifically, I had only seen one of its several ferias, the notorious La Ribera. (More on La Ribera and La Salada, generally: 1 and 2.) Too, much like those who warned me of the place, ultimately, it seems, my understanding of it remained unknowingly far narrower than I thought. And, as such,  it remains.

2 thoughts on “La Salada as Subject”