With the New Year picking up speed and the passed year quickly dissolving in our memory, I want to take this opportunity to recap on a couple of remnants from 2011. In the following 2 posts, focusing on Colombia, the home country of our widely discussed Medellin, I want to share a quick glimpse on 2 specific leftovers from 2011. 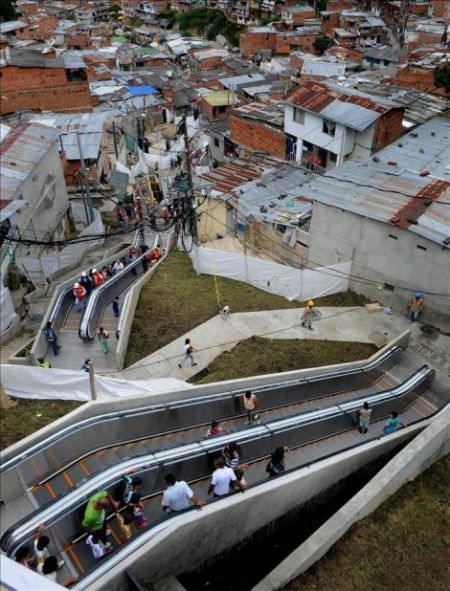 Yes, 2011 culminated with yet another mobility innovation in Medellin. Adding to the existing list of Metrocable (in Medellin; Caracas and now Rio), elevators, and monorails, we have now a new mechanical tool for pedestrian circulation: exterior electric staircases. Although not the first exterior electric staircases(see: Honk Kong), this is he first of its kind being located in one of Medellin’s most difficult informal settlements. 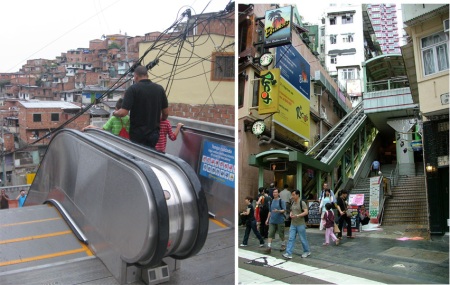 The stairs are being built in the informal settlement Las Independencies (12 000 residents), located in the Comuna 13 as part of the Comuna’s PUI (part of a group of interventions including a Library Park: Parque Biblioteca San Javier , and the city’s second Metrocable). 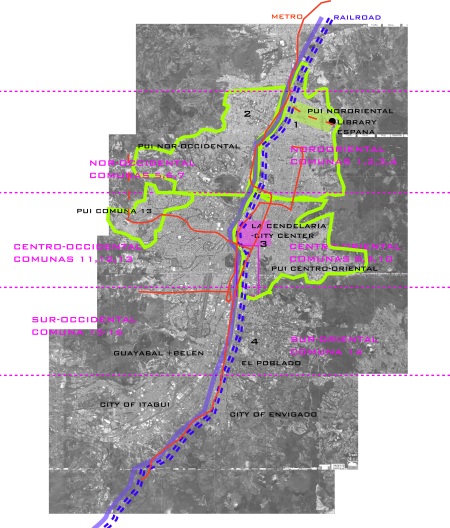 The electric staircases, imported from Japan, were inaugurated in December 2011, costing 13500 million Colombian Pesos (approximately 7.6 million USD). With 130 linear meters, covering an area of 2000 sqm and replacing over 200 steps, the mechanical staircases climb- through 6 separate segments- 38 m in height.

Although the staircases were inaugurated in December, only 2 segments are functioning during restricted hours: Monday through Saturday they operate from 2-5 PM, 12-3 PM on Sundays. In this regard, one resident interviewed stated that the staircases ‘worked beautifully for the inauguration day, so the ex-mayor could ride on them,’ yet that hasn’t been the case since -“the work is still in diapers.” (source: ISSUU, January 12)

Moreover, a friend who recently visited the area told me she went on a rainy day and since the stairs weren’t working, she stood in the middle of muddy road (as the access roads to the staircases have not (yet ?)-been paved) surrounded by a group of very disillusioned tourists.

The staircases are accompanied by other interventions comprising close to 3345 sqm of ‘green and public space, aiming to strengthen and better the life of surrounding residents.’ Contingent on this, a resident interviewed stated that this will be a very beneficial project for the neighborhood as it will bring a lot of tourism, and will end the violence.’ Indeed the staircases have been stipulated to help the security of the area, residents believing that as a new tourism spot, more police will be present in the area.

Issues regarding accessibility for people with disabilities,  poverty voyeurism (ROCINHA), as well as the long-term sustainability of the project including material and project maintenance, and operational costs are sure to come up.

Accompanying the staircases, 2 buildings will be constructed in order to house police stations, a social justice post and an INDER (institute for sport and recreation). This brings up more questions: Are local residents getting trained to help with the operation and maintenance of the staircases? What type of socio-economic programs will be implemented in the area (apart user training programs that will take place in order to teach residents how to ‘appropriately’ use the stairs) in order to train and provide new opportunities for residents?

I can’t help but draw a parallel with the Guayaquil renovation project of Las Peñas.  Boldly stated, Las Peñas is a staircase renovation and beautification project that, in the last years, has shown signs of gentrification. Its proximity to the city center, as well as a new CDB and adjacent glass-tower residential developments, has made it an attractive place for new restaurants, clubs and large amount of tourism. In addition, the lack of sustainable policies protecting local residents from getting displaced has resulted in a quick transformation of real estate prices in the area.  Nevertheless, Las Peñas, began with an interesting move. Initially, despite the renovation in the area, none of the residents were displaced, and instead, local residents were provided training and guidance in order to open or ‘formalize’ their businesses: local shops, cafes and stores sprung up along the renovated path. It is a shame that this was not sustained in the long-term… 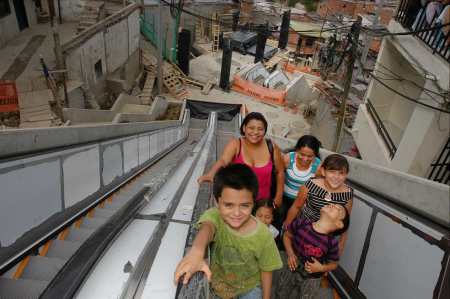 Although it is too soon to judge the real impact of these electric staircases, we can- and should- once again, stress the importance for post-construction and user evaluations, to evaluate the outcome and long-term impact of the intervention… I realize that I have said this in other posts,  but before cutting the ribbon for a new shiny and innovative project, we should consider whether or not we are simply imposing an image of social good or truly responding the politics of place and socio-economic realities of the area.