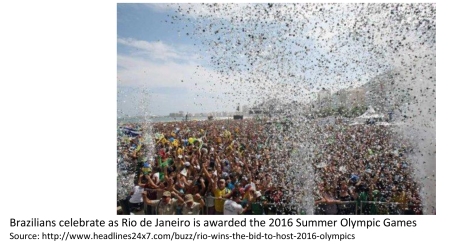 On October 1, 2009, the International Olympic Committee (IOC) announced that the Summer Olympic Games 2016 will be hosted by Rio de Janeiro. The Bid Document submitted by Rio de Janeiro was an extensively detailed and thorough proposal consisting of a three-volume document explaining all administrative, financial, social and technical aspects.

Accompanying traditional concerns of transportation, sport, health, education and environment, the bid reflected an elaborate narrative on an urgent need for the ‘new’ and for ‘transformation’.

“The Rio Games will also celebrate and showcase sport thanks to the city’s stunning setting and a desire to lift event presentation to new heights.
Rio 2016 will excel in meeting all the needs of the Games Family…. At the same time, Rio 2016 will be an opportunity to deliver the broader aspirations for the long-term future of the city, region and country – an opportunity to hasten the transformation of Rio de Janeiro into an even greater global city.”
“For the people of Rio, the Games will transform their city with new infrastructure, new environmental, physical and social initiatives and new benefits and opportunities for all….
They will bring a new level of global recognition for Brazil. Superb Games and stunning broadcast imagery will provide a long-term boost to tourism and Brazil’s growing reputation as an exciting and rewarding place to live, do business and visit….

History’s first Games in a new continent, in a city with unique global image, will open new horizons, building interest and enthusiasm over the full four years of the Olympiad. The media and sponsors will be excited by a new destination, bringing new value to the Olympic and Paralympic brands. A compelling new story is ready to be told.”

(Extracts from Vol.1 of Candidature File for Rio de Janeiro to host the 2016 Olympic and Paralympic Games)

Indeed, a very well written and compelling story. A story that –although at present fictional-has the potential to manifest itself into reality with the right political will and public sacrifice.. A work of fiction so intent on its manifestation, that it inspires political will and social sacrifice. After all, would questioning such narratives not constitute a regressive, even unpatriotic attitude? Who wants to become a stumbling block in the city’s and the country’s path towards a new future?

In order to ensure that all development with regard to the Summer Olympics and other mega-events, such as the FIFA World Cup 2014, are beneficial to the city in the long run, two Legacy Committees were established. These would focus on Transformation of the city, Social Inclusion, Youth and Education, and Sport development.

The Urban Legacy Committee claimed it has ensured that all existing facilities and resources have been integrated in the formation of this bid proposal, aligned “with long-term city objectives, optimizing the urban and social legacy opportunities.” Contingent on this, the Games were spread over four districts within the city-Maracana, Copacabana, Deodoro and Barra – each with specific goals.

While Maracana was slated to host the opening and closing ceremonies, Deodoro and Copacabana host a few events and provide accommodation for visitors within existing facilities. Barra, on the other hand,was identified for maximum new development, and as the nucleus of the event in order to ‘parallel’ what is believed to be the city’s expansion. ( Vol.1 of Candidature File for Rio de Janeiro to host the 2016 Olympic and Paralympic Games)

The Barra Cluster masterplan envisions the development of land around the Jacarepagua lagoon. It proposes enhanced BRT corridors and metro connectivity into the region, thereby connecting it to the city center. It consists of four major components:  the Athletes Village (also referred to as the Olympic Village), the Media Village, the Centro Convention Center and the Olympic Park. 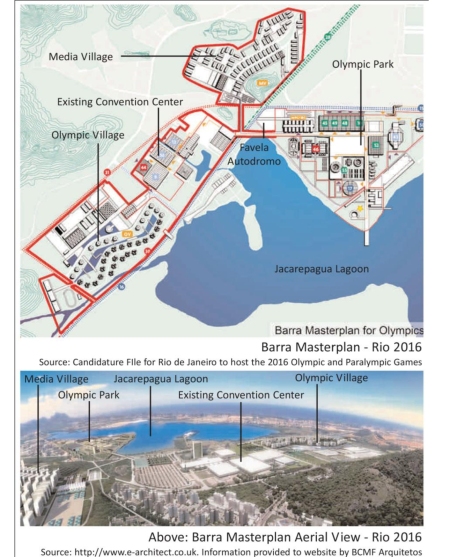 The Olympic Park is located on a roughly triangular site of about 100 hectares that protrudes into the Jacarepagua lagoon. It has been in the news lately as the results of an international design competition for the site were announced. The results for the winning proposal were recently announced; AECOM, a firm also associated with the urban legacy frameworks for the London 2012 games, was the big winner. AECOM proposed a three-phase strategy addressing the Games event and subsequent redevelopment that would involve the demolition of a majority of the temporary sports facilities and replaced with residential blocks.

While AECOM addressed the long-term legacy of the project through its phasing, it was not required to consider the overall masterplanning of the Barra nucleus. As a result, the Olympic Park is connected to the Athletes Village and Convention Center along the Nelson Piquet Avenue as well as through an overhead bridge across the Abelardo Bueno Avenue. A crucial oversight is the future of a small favela located in the heart of the larger masterplan – Vila Autodromo. Located right in the heart of the Barra masterplan for Olympics, this community provides the city authorities with the perfect opportunity to implement their promises on legacy and their vision for a better future. It is a situation that has often been dealt with heavy-handed authoritarian stands by governments across the world. It is a choice that does not recognize citizens or citizenship. So how is Rio de Janeiro tackling this issue?

Maulik Bansal is an urban designer and architect. He completed his undergraduate studies from the TVB School of Habitat Studies, New Delhi and worked in India as an architect for over nine years before choosing to pursue his Masters in Urban Design from the University of California, Berkeley. He has also been a visiting faculty in colleges around Delhi, and has conducted research trips and studios with undergraduates over four years. Maulik’s urban design thesis focused on the 2016 Summer Olympics in Rio de Janeiro, Brazil, demonstrating strategies that can be adopted in order to ensure that the growth and development related with a mega-event is continually integrated with the national, regional and local long-term objectives

2 thoughts on “The Olympic Juggernaut Hits Rio de Janeiro: Is there a compelling new story? [1]”