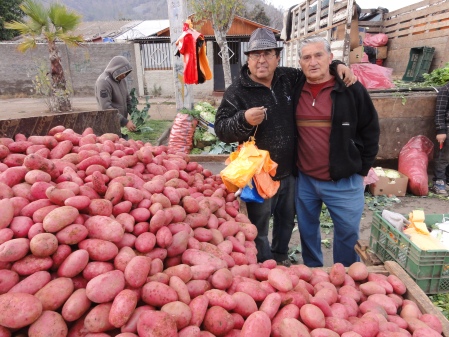 Potato vendors pose for a picture at a government-sanctioned feria libre in the Huachuraba neighborhood of Santiago, Chile. Credit: Jennifer Renteria

This last summer, I traveled throughout Latin America in search of public markets and street vendors with the help of the USC School of Architecture and William and Neoma Timme Fellowship. By observing and documenting public market and street vending typologies in Latin America, my research focused on furthering the understanding of relationships between formal design and the “ephemeral,” often informal, and contentious practice of street vending. Based on my research methodology, which includes textual, photographic, and drawn documentation, as well as interviews with professors, practitioners, city officials, vendors and local community members, I will provide profiles and analysis of each city over the course of the next several months. However, to begin, I am presenting an introduction to my overall experience and takeaways. 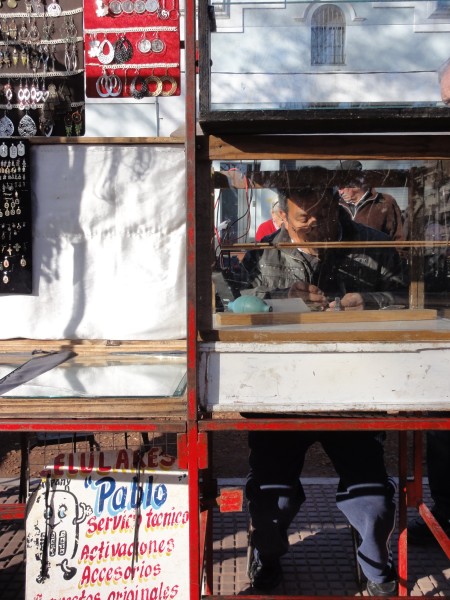 Pablo, a jeweler who has sold at the La Boca feria for more than 15 years, fixes a watch behind his self-designed stand and workstation in Buenos Aires, Argentina. Credit: Jennifer Renteria

Approximately two weeks were spent in each of the following cities: Santiago, Chile; Buenos Aires, Argentina; Sao Paulo, Brazil; Lima, Peru; and Mexico City, Mexico. Although I stayed for a short period of time in each city, the local contacts and visits — ranging from small neighborhood fairs to lesser-known late-night/pre-dawn multi-block markets — allowed me to get a solid and unique overview of how public markets and street vendors are perceived and dealt with in each city. These visitations included the occasional rush of adrenaline provoked by unanticipated dangers (like slippery, muddy puddles) and humorous and entertaining revelations of local identity (such as the ever-present, fully-dressed, seemingly homeless dog).

The Ferinha da Madrugada, held every morning from Monday to Saturday beginning at 3 a.m., begins to see its end as the sun rises and the clock nears 7 a.m. in Sao Paulo, Brazil. Credit: Jennifer Renteria

As might be expected, my efforts took me to others who had done similar studies on specific sites, also using multimedia tools and also raising the question– where does the designer fit in this picture? — a question for which I still struggle to find a concrete and direct answer. Let me expand. In certain scenarios, it seemed that the designer could easily contribute by providing guidelines to uniformly designed, government sponsored, neighborhood markets. In other cases, though, such as in large, illegal markets found within informal settlements, a designer’s efforts, however well intentioned and dedicated as they may be, appeared less impactful. This became especially evident at a small and intimate architects’ reunion in Buenos Aires, where professional architects tackling and engaging the issue of informality from different angles all shared the same feelings of inconclusiveness at the end of their projects, research and efforts. Together, we asked, “Where does one go from here now that these informal activities have been thoroughly documented, and design efforts have been overrun by more immediate needs?”

These unsettling questions followed me to Brazil and over to Peru, where even more seemingly unmanageable scenarios were witnessed and bits of optimism were sprinkled within a larger deflated sense of being able to manage all the powers involved. Much of the same was also seen in Mexico City where, as one Chilean professor had put it when speaking of his own local conditions, street vendors were “rampantly” taking over the streets. However, Mexico City also offered a glimpse of hope. 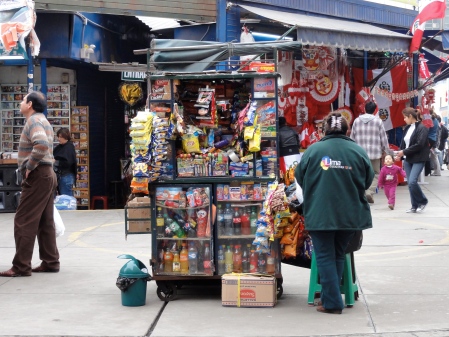 There, I met and interviewed architect Arturo Ortiz Struck, whose extensive and acclaimed experience conducting design outreach in informal settlements has lead him to conclude that when it comes to the informal, the designer’s role is, well, nearly inconsequential. Upon an immediate reading of this, his conclusion may seem depressing to an eager designer, however it does have a hint of optimism to it. He elaborated by stating that designers interested in improving informal conditions are going about it in the wrong manner, for the most part; instead of trying to design spaces or activities, even if community members are included throughout the entire design process, designers should instead be teaching people and communities how to design and build themselves. If untrained individuals are the ones building more than half of the built environment, why not just teach these people how to do it ‘right’? As a result of his conclusions, he is currently working with the Mexican government to rework K-12 curriculum so as to include design and build courses that would culminate into the actual application of students’ work. Thus, the hope is that the language of design will become a universally understood one that can be more readily used and applied.

Whether these students become designers or not is not what is important, rather, that they can apply their studies and use the language they gain when discussing these and related issues with designers, political figures, and their neighbors are what is. Making the pursuit of ‘good’ design relevant and connecting the consequences of ‘bad’ design to other issues, such as health, can also build coalitions and ties between these, thus making the case for ‘good’ design stronger.

The initial question – where does the designer fit in this picture? – despite given some resolve with Ortiz Struck’s approach, remains, for the most part, unanswered. Perhaps, it is the wrong question to be asked. Perhaps, as Chilean urban design professor Ernesto Lopez Morales put it, what should be asked is “How do spaces without designers work?” and “What can we learn from these spaces and the way they are designed?” As I provide profiles and analysis of each city in coming entries, these questions (and, possibly, their credibility) will be addressed.

One thought on “Latin American Street Vending and Public Markets”