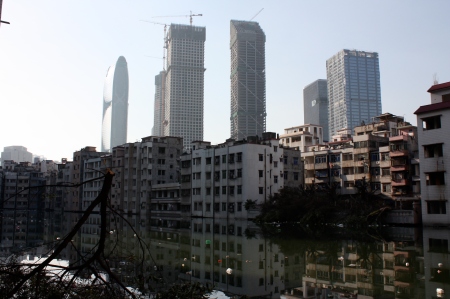 “Urban villages” are the result of the rapid urbanization of cities, which in their expansions, engulfed all surrounding fishing and agricultural villages. In the Guangdong Province, both the provincial capital Guangzhou and economic hub Shenzhen (also a Special Economic Zone or SEZ), have a great number of these “villages in the city.” With regards to Guangzhou, there are about 138 “urban villages.”

In compensation to the occupation and construction on all surrounding agricultural land, the government allowed the farmers and fisherman living in the different villages to develop multi-story buildings. With the government turning a blind eye to the uncontrolled urbanization, buildings were developed following the original footprints of houses, thus growing only inches from each other. In their majority, urban villages are overcrowded, composed of densely packed buildings, with extremely high FARs, ranging from one story to 6 or 8 story constructions. The circulation consists of narrow winding alleys, that due to their width and sharp turns, remain primarily for pedestrians and bikes; even so, they are sometimes difficult to negotiate with the large amount of people and commerce spilling onto them.

Above: Facade of Xiancun Urban Village in Guangzhou- instead of housing, we now see 6 to 8 story high buildings.

Most of these urban villages began to grow vertically in the 1990s as some original villagers took advantage of the high migration and increased demand for housing in the city, and literally extruded the footprint of their house. Today, these villagers and house owners have turned into wealthy absentee landlords. As far as residents go, they are either migrants, dispossessed farmers or belong to other low-income groups. If migrants, village inhabitants are regarded as “temporary residents” or “unregistered outsiders,” still linked to a hukou (household registration system) that is rural.

[Under the hukou system, the “origin” (where a person comes from) overrides the “current location.” Because of this, the hukou has become a status classification that can only be altered through administrative discretion and does not change  with migration. The type of hukou can limit or exclude the population from having the access to schooling systems, low-cost housing, and other social services. ].

Similarly, the “villages,” hold their original administrative status and thus remain outside the formal urban government system in which they are embedded.

The urban villages I visited are overcrowded, incredibly dense, with little light or ventilation, and for the most part rely on ad hoc infrastructure. Nevertheless, they also have some positive qualities, reflecting a much stronger human scale than the mega-developments currently taking place in the city. The winding alleys in the village are extremely active, lively, and remain the pubic space par excellence… The larger alleyways are in their majority commercial on the ground floor, finding everything from fruit and food markets, to restaurants, to Internet and phone providers, to beauty salons, etc. Buildings are raised 2 to 3 steps from the alleyway and have the commercial space open to the alleys, and a separate entrance/stairs to the apartments above. In a great number of cases, these residential entrances were actually not facing the main commercial alleys, but were located in narrower side alleys.

Following are images of a couple of Shi Pai (with a population close to 100 000) and Xiancun urban villages located in Guangzhou. 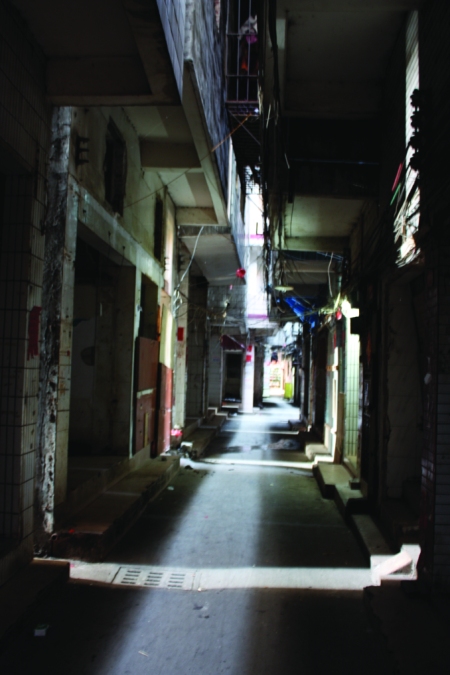 Empty alley in Xiancun; the village is almost entirely deserted now that the government is planning to redevelop the area into high rise towers... 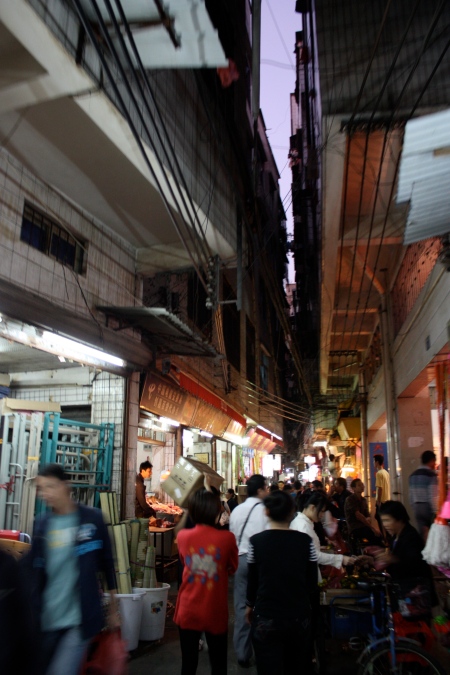 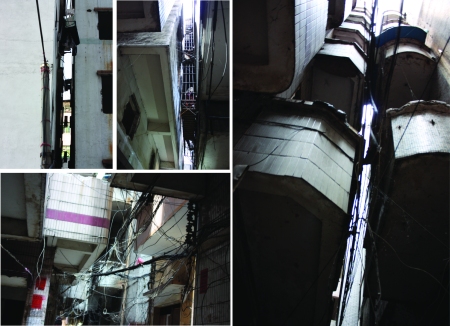 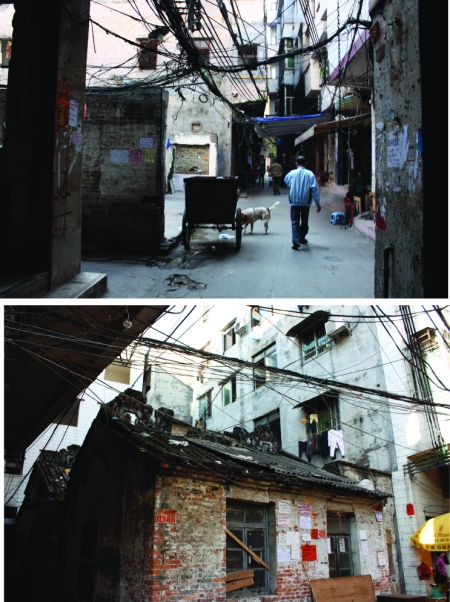 Following is a video to reflect the atmosphere when entering Shi Pai… you’ll notice there is a lot of noise, a lot of lights, and a lot of motion.  To be honest, walking in the crowded alleys almost feels like you are in the middle of stampede- there are so many people, bikes and carts passing by that you feel like will get run over if you stop.