The Urban Renewal Agency (URA) has bought out the entire area of Kwun Tong, aiming to construct a mix-use building complex consisting of several 40 to 50 story tall residential towers, a hotel and office tower as well as open space plazas, and of course, a mall. 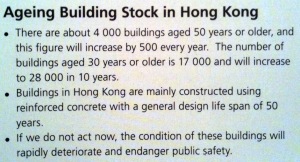 Although URA has already begun their phase 1, they have yet to remove all of the buildings.  Through a contact in the agency, I was able to visit a couple of abandoned buildings having “unauthorized building works (UBWs)”- meaning illegal and unauthorized subdivisions that have taken place in the buildings. In  their majority, these UBWs are actually rooftop settlements.

Older Building with Rooftop Settlement;  a new developments is visible in the background.

As surprising as it is to see informal settlements on rooftops in a city and that lives through laws of eradication/reconstruction and a strong government control, it is even more surprising to see that many of these rooftop settlements are actually quite organized and consolidated! The type of rooftop construction depends on the type of building and their building managers… Generally speaking, there are two scenarios:

CASE 1: For some of the more consolidated and organized rooftops, where one primarily sees concrete constructions, there is a landlord in the building who had the idea and initiative of taking over the roof and subdividing it. After subdivisions were made, “lots” were either sold or developed and rented as units.

CASE 2: For others cases, the settlements began similar as shantytowns, squatting on the rooftops, and perhaps establishing informal agreements and/or rent with the building owners/tenants. In this case, the construction looks more like temporary construction using corrugated metal sheets, plastic bags and wood for structure (case 2).

In regards to the *case 1* structures, which are the type of rooftop settlements that I was able to enter, the subdivisions follow the original building plan subdivisions, leaving a path to serve as a double loaded corridor. They are barely recognizable at a first glance, so well they blend to the original façade. Plumbing, drainage and electricity is run through this center aisle. Something surprising is that, although illegal in their construction, all of the units have an address, and residents pay for utilities as well as other city taxes. This is the reason why it is why the URA faces quite a difficult situation when it comes to compensations…

Following are some diagrams and photo sequence to give you a better idea these areas: 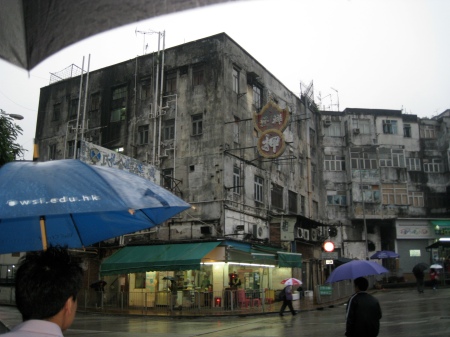 A rooftop settlement seen from street level- in this particular case, the addition blends into the original facade. 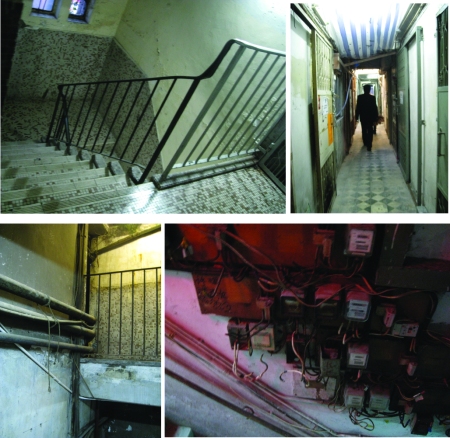 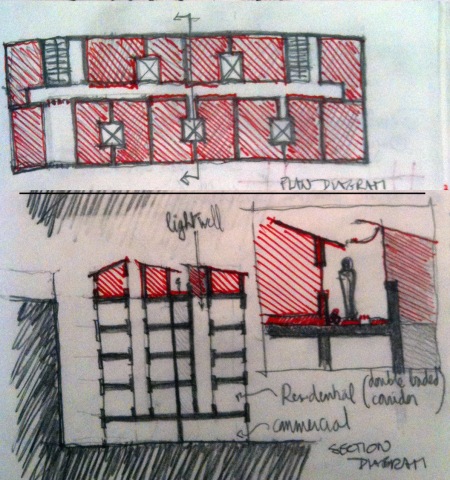 Diagram-Plan and Section of Rooftop Settlement

In the center aisle/corridor, there is an extra layer of concrete in order to accommodate the drainage, and plumbing on the side 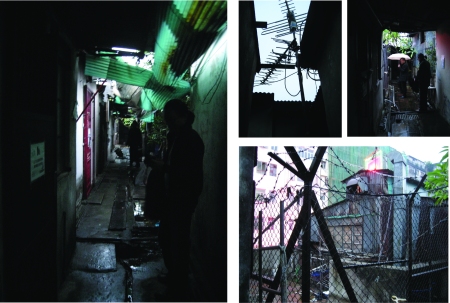