Close to 70% of inhabitants of greater Cairo are living in informal settlements. Although informal housing today represents the dominant residential mode in Cairo, there are few “slums” in the city. Urban poverty is not particularly concentrated in a specific area, but is mixed within lower and middle-income families, in a number of older neighborhoods and informal areas of Greater Cairo.

Only recently, did the government recognize informal areas or Ashaw’iyyats (the term literally translates to “random,” and has become synonymous to informal areas and ”slums”) creating in 1993, a fund- “the Fund for Urban Upgrading”- to improve these areas.  The term currently used through the Fund is “unsafe areas.” The categorization is based on UN habitat slum criteria: life threatening (location), makeshift (condition of building structures), health (presence and conditions of basic infrastructure), and security/violence as well as legality. From what I was able to gather on the Fund’s structure, projects are constructed on a land based financing, where the value of the land pays for the housing. The Ministry of housing constructs the housing and puts it up for rental. When relocation is part of the solution, it is firstly paid for leaving the remaining money to be used for housing (usually 5 floor apartments). The governorates (local administrations of Cairo) are the ones that do the actual implementation of the project, first applying for funding to the Fund and then providing the technical assistance for the project.

To further explain, Cairo is politically divided into governorates; these are the main division of local administration in Egypt. There are 5 governorates total- Cairo, Giza, Qalyubiyah, and the newly formed Helwan and 6th of October. Even though a “Greater Cairo Region” has been established at the national-level General Organization for planning purposes, governorates remain dependent on central government budget allocations for recurring and capital costs. This has obviously hindered any type of program or solution addressing the reintegration and upgrading of informal areas in the city. Contingent on this, it seems that in many cases, the Fund has been used on large infrastructural works such (roads, bridges, etc.) often bypassing the informal areas.

On a parallel note, GTZ has promoted a participatory approach to urban upgrading (Participatory Development Program -PDP), urging participation on all local levels and actors. There are two pilot areas in which the PDP has been working and experimenting: Boulak al Drakour and Manshiet Nasser. GTZ_PDP link

It must be noted that a program’s success lies, amongst others, in the active participation of the government (not only NGOs and community actors), as well as in the shift in structure aiming towards decentralization, institutionalization, and a stronger and more transparent communication between central and local authorities. 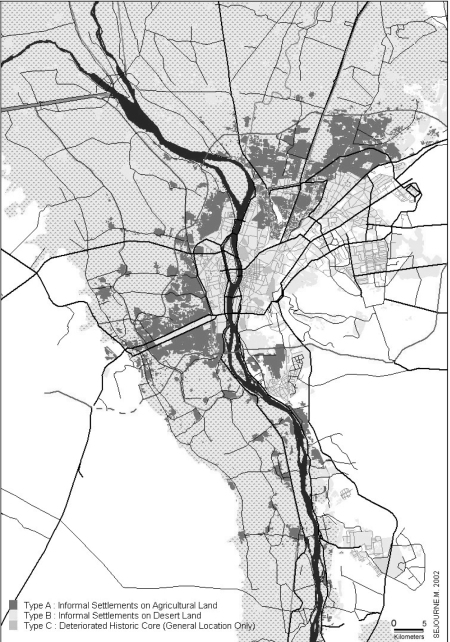 Egypt has inaccurate and inconsistent data concerning informal areas. Even though UN habitat standards have been adopted, there is still not a consistent categorization of informal settlements; on the contrary, different organizations define informality in different manners. Originally, typologies of the settlements were created depending on the previous land use of the area. Thus, informal settlements were grouped as former agricultural land, former desert land, urban pockets, and historic center. Although the latter does not fully describe the various typologies, I will use these groupings for an overview (mimicking the structure of GTZ’s report for the UDP slum research):

The main typology consists of private residential buildings that were constructed illegally (purchased from farmers without plans for subdivisions or permits) on agricultural land. This particular typology began in the 1960s, and according to a GTZ report for the UDP slum research, “the typology is said to contain half of the population of Greater Cairo and almost half of the total residential area.” Most of the financing for these buildings comes from a personal level (savings, remittances, etc), and thus, the structures are built in quite an incremental manner. In addition, since this was previously agricultural land, the main circulation patterns stem from former canals in the area.

Following are some images of the informal settlement, Boulaq al Drakour: 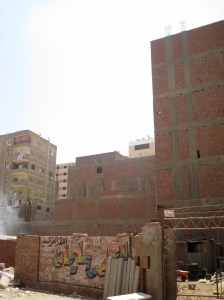 Because of their numbers, many of these settlements, although still tagged informal, were soon provided with formal services. In the last year, the government termed these areas as “Publicly Planned Areas.” By eliminating the tag of “informal” and establishing a new nomenclature, the government is basically including these settlements into the formal city.

Former desert land: In its majority, this typology can be paralleled to squatting. An example is the area of Manshiet Nasser, which was founded by garbage collectors. The areas are illegal but settlers have certain rights pertaining to the claiming of desert land. 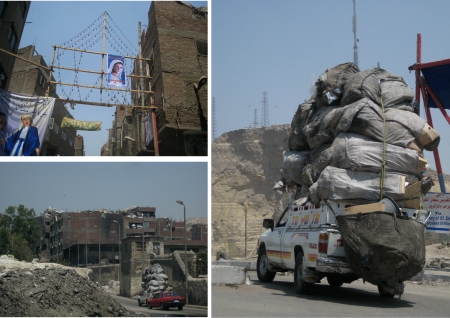 Primarily a Christian communitiy, religious decorations go up during Ramadan 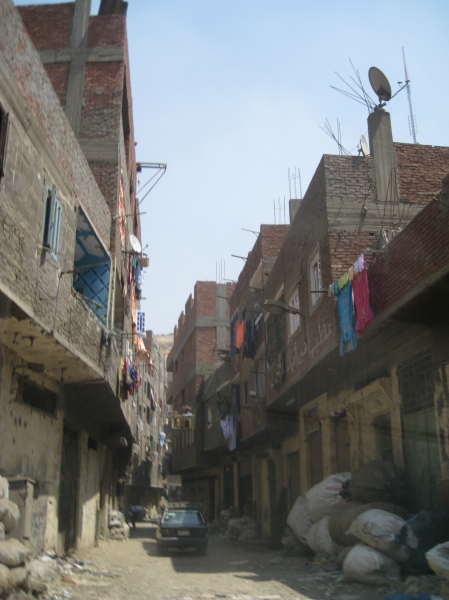 Following are some images of one of the cemeteries: “City of the Dead” 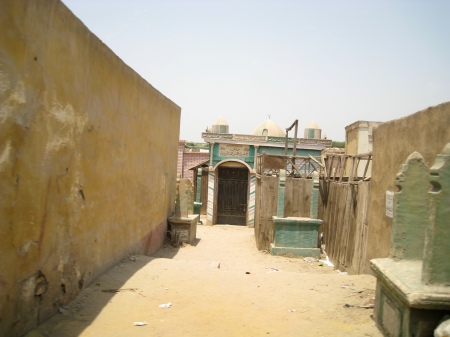 Animal market; "City of the Dead"

Following are images of two “villages” or pockets within Giza’s urban fabric.

Bein El-Sarayat is one of the older settlements in the area:

Now for a newer urban pocket located in the vicinity, Dair El-Nahya: 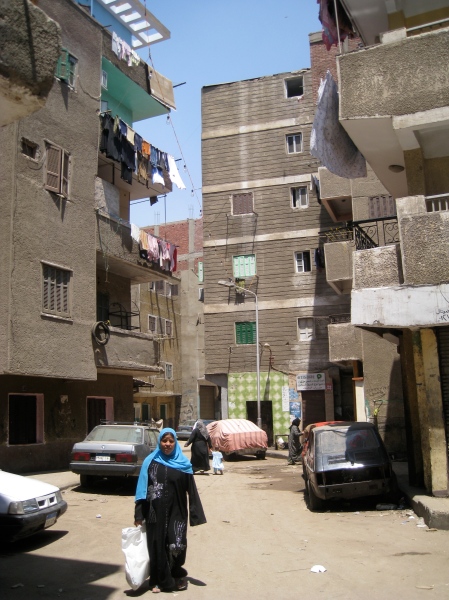 Alleys and courtyards decorated for Ramadan

It is important to note, as Dr. Dina K. Shehayeb, professor in the Institute of Architecture and Housing at the Housing and Building National Research in Cairo, points out, there are more than 14 different typologies of informal settlements that have been identified.