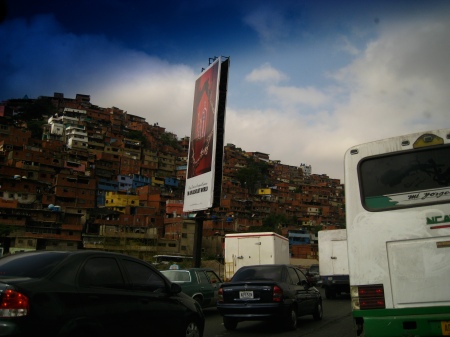 Where are we today?

In 1987, for the first time, the Ley Orgánica de Ordenación Urbanística, the equivalent of the zoning and planning law for the city, recognized the barrios as an integral part of the city and as such, made them subject to special plans for their reordering and physical rehabilitation (also opening a slight door for the possibility of legalization). Unfortunately, the law was never fully put practice and thus remained as a great idea but only on paper. In 1989 two important national laws were passed (Decentralización, Delimitación y Tranferencia de competencies del Poder Publico + Eleccion de Gobernadores y Alcaldes), opening the doors for the political decentralization, a stronger public participation and sustainable development of the country’s infrastructure.

Around the late 1980s, based on the previous work and studies done by the CCG: Centro Cuidades de la Gente, lead by Teolinda Bolívar at the Universidad Central de Venezuela (UCV), which focused on the analysis of the barrios and autoconstructed neighborhoods; http://centrociudadesdelagente.blogspot.com/], Federico Villanueva and Josefina Baldó began a series of housing studios at the UCV. This experience led to the consolidation of a reintegration and rehabilitation plan for the barrios (“Plan Sectorial de Incorporación a la Estructura Urbana de las Zonas de los Barrios del Area Metropolitana de Caracas y de la Región Capital”).

In 1999, under Josefina Baldó’s leadership, under the National Council for Housing, the Programa de Habilitación Física de Barrios (The Physical Habilitation of the barrios) was established.  A competition was held in order to select architects for the upgrading of informal settlements The state institution “CAMEBA” lead the implementation of the program, with financial backing from the National Government and the World Bank. This is how the firm Arqui 5, amongst other winners, began their work in the barrios. 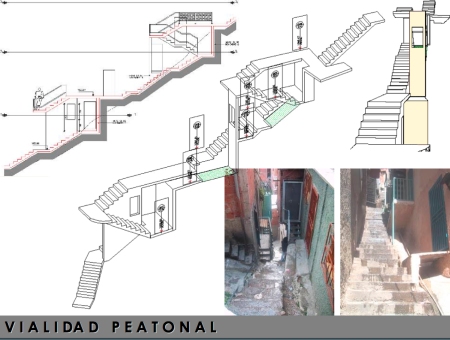 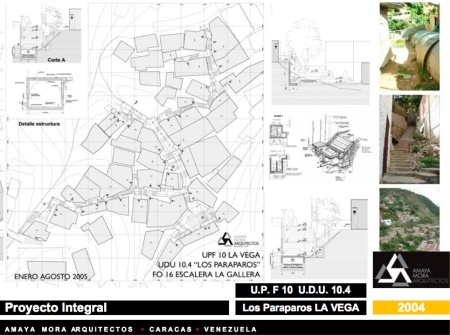 However, in the year 2003, the government stopped all plans by CAMEBA and began a new plan, called the Misión Villanueva, which as the name pretty much indicates (new villa) consists in eradication, and relocation of barrios into new constructed communities. What is particular is that these communities are based on a communist concept of mono-production, attempting to convert each planned community into an agricultural or industrial center based on one product. From my conversations and time in Venezuela, I can say, regardless of the marketing and propaganda, these plans seem to be extremely slow in their execution. I did not hear nor see a villa being constructed… 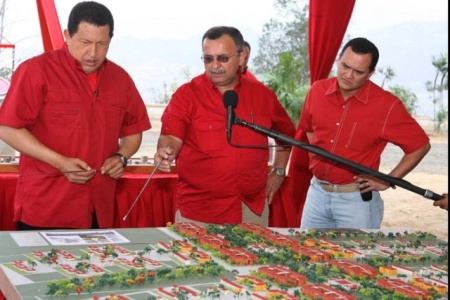 In contrast to the stagnation of the government, the universities (the UCV, the Universidad Simón Bolivar, etc) seem to be doing interesting work, making various proposal and actual constructions regarding the upgrading and reintegration of the barrios. For example, the Simón Bolivar (USB) in particular has established a program called “ECO, Constuyendo Espacios para el Cambio” (ECO, constructing spaces for change). This program, as part of community service that students have to fulfill during their university years, focuses on participatory interventions in the barrios. Many of their projects and actual constructions consist of small-scale public space interventions.  Nevertheless, the projects seem to be growing and ECO is now seeking financial support from the IDB… 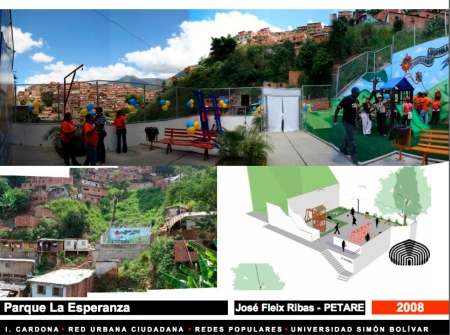 Parque la Esperanza in Petare, University Simón Bolivar; source: Arqui 5. Petare, as the largest barrio in Caracas and as part of a persistent municipal government (Sucre), is becoming one of the primary sites for public space and specifically park interventions. The current administration of Sucre is aiming to create a network of parks as a means to equalize opportunities and reintegrate the city.

With the increased centralization of power that has taken place with the current president, Caracas ,and the country in general, seems to be in a tough position. What Venezuela is currently witnessing is a loss of power from the side of professionals and municipal governments and strong, conflicting interest with State policies and projections. In my opinion, the high unemployment and incredible percentage of urban informality should be an indicator to the government to reinforce and prioritize localized plans and actions. It is the local government the ones who can knowingly identify the most critical problems and address the affected/benefited communities directly. Nevertheless, the massive centralization remains a difficult and convoluted obstacle for both municipal governments and professionals who are trying to, not only address the barrios, but to create a better the city.