São Paulo is the third largest city in the world; its urbanized areas range from floodplains to mountainsides. The city, as stated in a previous post, is situated in a flood prone watershed, where several rivers that rise in the surrounding mountains converge. Favelas are dispersed throughout the city, but particularly in steep slopes, around reservoirs and along rivers. As such, the emphasis has been on sanitary upgrades to settlements surrounding the city’s reservoirs to improve public health in both formal and informal communities. Such is the case for Jardim Iporanga, a favela that I visited at the edge of he Guarapiranga Reservoir.

Guarapiranga is located alluvial plains, and serves as a transition areas between the cliffs of the Serra do Mar and the Sao Paulo plateau. The Guarapiranga reservoir is a vital component of the Tiete Heights Basin (SP relies on a hydroelectric system) and a vital water source for the city.

In  1909 a damn was constructed, holding approximately 200 cubic m of water and the equivalent of 8400 acres of flooding area. Initially, the damn was purely for hydroelectric production, some years later becoming a water supply for the city. In 1925 the Billings Reservoir, adjacent to Guarapiranga, began to be used by the city, and Guarapiranga commenced another role, providing recreation, becoming a retreat from the city life. An urban beach, hotel, boating club were constructed on the NE (right) section of the bank. This is the area, which currently holds the better infrastructure, is low density and even has its own garden city! The Southern bank remained more scattered developments and vacant land for agricultural production. 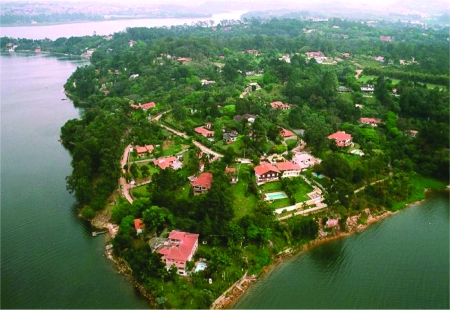 In the 1940s, with the later late industrialization of the city, there was an initial rise in the population settling around the Reservoir. The occupation of the left bank began in the 1960s with various informal settlements who where taking advantage of the proximity to public transportations and train tracks.

In the 1980s, the local government aimed to restore the water quality. It is also around this time that the area witnessed an increase in informal settlements. The 1991 census calculated around 600 000 inhabitants in the basin. Today, the densification and construction around the basin has lead to an erosion of many of the existing natural canals, as well as removal of native vegetation and soaring increase in pollution and water contamination, lowering the quality of the water. In addition, there are (apparently) geomorphic risks associated with the soil quality of the land, posing urgent risks to any settlements with “inadequate occupation”, which mostly means the favelas.

Diagrams taken from “Guarapiranga, urban and environmental rehabilitation in the city of Sao Paulo”

The intervention in Jardim Iporanga was done in 2005. The intervention consists in the recuperation of natural water sources (in Spanish, nacimientos de agua) as well as some provision of basic services and housing.

The final result of the intervention mostly resembles a linear park, highly punctual and located in a very limited area (refer to the darker magenta in the site plan). The linear park consists of a waterway canalization, a 6 to 10 foot walkway, which grows at certain points to become (and I quote) “public space for the community”, some playground equipments, and the construction of houses which run parallel, in bright colors (and now lots of graffiti) to the walkway and stream. The linear park culminates in a grassy area that holds some newly planted trees and a couple of natural water springs (which are quite small and in my opinion, somewhat anticlimactic with regards to how little treatment they were give in their physical manifestation). The strip is surrounded by residences, but very little, if any, commerce. Most of the commerce in the community happens parallel to the linear park, in streets that are located in higher topography.

The newly constructed houses are all 2 stories tall. The structures are either 1 story house with another home on the top floor and the stairs leading to the upper home as part of the front façade, or a 2 story house with a small deck, living kitchen and patio (for drying cloths) on the 1st floor, as well as 2 bedrooms on the upper floor. The houses range from 30 to 47 square meters. 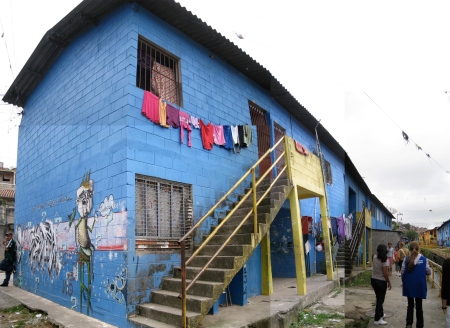 It was interesting to walk around and see the amount of clothes hanging on the exterior verandas as a reflection of the number of people living in a house (as with larger families, the patios are highly insufficient in size).

I was not able to find out the number of people that were displaced but did find out that many the relocation process works as following: A “target family” (which were the families living adjacent to the stream) is either offered a new house, 5000 Reales (2500 dollars), or an exchange with another house in the community.

Two years after the physical intervention has been been completed, the second phase of the project begins. This 2nd phase consists in providing sewage to the entire surrounding community (as many houses are still dumping everything into the streams), as well as a regularization of the area (land titles). In contrast to Guayaquil, which formalizes before intervening, and even to Medellin, which, apart from the new housing that the government constructs, doesn’t give or place an emphasis to land ownership, Sao Paulo places regularization as part of a second phase to a project, taking place 2 years after the physical intervention.

Regarding community participation, it seems that the extent of the participation process consists of a couple of meetings to inform (and perhaps “educate”) the community of what the intervention consists of , and a second meeting to select the colors of the houses (needless to say, once constructed, these colors and facades are filled with graffiti, as a sign of appropriation and expression). I do have not note, that there are quite a number of people working in social services that have a direct relationship with the community leader and the community representation group. They are mostly working in educating the children with regards to environmental protection, as well as capacitating/organizing women in sowing and crocheting handbags and other house goods. I learned that for the UN urban forum, which will take place in Rio towards the end of this month, they were commissioned 1000 handbags! That said, although a small intervention, it is the beginning of a strong initiative- I only hoped that the architecture and intervention would have kept this in mind, or at least be designed to support this type of community activity and empowerment!