Until the 1980s, the strategy in Brazil for dealing with informal settlements and favelas was eradication and reconstruction. In 2001, the Statuto da Cidade (Statute for the City) was passed, a federal law regulating articles of the Brazilian constitution regarding the social function of property, land use regularization, real estate valorization, participation in the planning process, in addition to supporting interventions in poorer neighborhoods and favelas, allotting specific lands for social housings, etc. As a result, the statute has allowed a strong emphasis in the urbanization of favelas. Even though the Estatuto da Cidade has been a powerful planning tool (sitting at the national government level), it has had contradictory results mostly because the municipalities (now talking about the local level) don’t, won’t or can’t implement it.

Another national program that exists and has been quite successful is Minha Casa, Minha Vida (http://www.minhacasaminhavida.gov.br/index.html).  The goal of the program is to finance housing for people in the lower incomes. Once again, a good initiative that can’t move forward if the municipalities don’t encourage and follow it… As such, we can then begin to view a disconnect between existing national and local policies, expectations, necessities and goals.

After speaking with a couple of the professors from the FAU-USP Faculty of Architecture and Urbanism (University of Sao Paulo), as well as some people working directly in, SEHAB, the Secretaria of Habitation of the Prefeitura (local government for Sao Paulo), it seems that the largest obstacles in projects and programs dealing with poorer neighborhoods and favelas, is politics. It is incredible to see how there is a little continuity with some of the projects and policies due to a lack of institutionalization. That said, every time that a different political party takes charge, the programs and studies began in the previous years die completely.

From my conversations, I learned that the previous government: PT (Partido dos Trabalhadores), a more socialist government, placed a large emphasis in participatory programs (including the self help housing- mutiroes) as well as projects directed to poorer sectors of the city, including lojamentos (which autoconstructed areas where the people have paid for their house but because of a fraudulent developer, they do not have the actual title- it is important to note that alojamentos are NOT favelas, as favelas here are classified as illegal squatting). There are few, if any, Mutirao projects directly encouraged by the prefeitura. The only ones taking place rely on the private “assessorias” or consulting firms ( architects and planners) that formed to support the initial program. The CEUs (Centros de Educacao Unificada, or Centers fro unified education) are another example of a program that began in the previous government, and now have minimum funding (more to come on the CEUS in a later post). 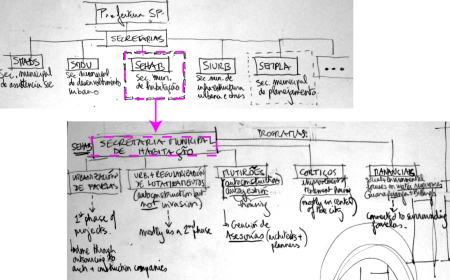 Diagram showing current structure of the Prefeitura, Secretarias, and some of hte main programs that are being implemented by the SEHAB (which is the secretariat focusing on favelas)

At the moment, the largest focus for the SP Prefeitura, particularly with SEHAB (Scretaria de Habitacao), which is the secretaria that mostly deals with projects in favelas (and not SEMPLA- Secretariat of Planning), is the Habitation plan for the 2024 (Plano Municipal de Habitaçao 2024, or PMH). This plan is part of the Plano diretor Estrategico do Municipio de Sao Paulo ( PDE- or Director Plan for SP, a local master plan for the city). The PMH identifies housing deficits in approximately 390 000 homes (I am not sure yet what the indexes are being used in order to identify a “deficit”), and aims to construct new housing (mostly mid to high rise buildings), as well as provide basic services to the surrounding areas, regularize loteamentos and rehabilitate cortiços (similar to tenement housing, with too many subdivision, ventilation and sanitary problems- cortiços are buildings mostly located in the center of the city). That said, most of the projects dealing with favelas in Sao Paulo consists of housing projects. In addition there is a focus on basic services and infrastructure, particularly in relation to sewage (due to the water sanitation problems). 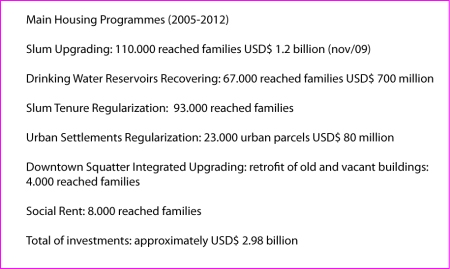